I was afraid that Tori might let me down and that i would be force to move her down from the third tier of my pyramid of musical favorites, but Scarlet’s Walk is one of the most eclectic and exciting album’s i have heard in ages. Looks like we’ll have to wait for Ani to release another shitty live album before i can move PJ Harvey up to the third tier…


This year: spent my fallback nearly doubling my knowledge of organic chemistry.


So, yeah, on some level i’m getting incrementally smarter every day.

I’ve been alone in the house all day working on a paper on copy protection for my New Technologies in Communication class, and when Gina stopped by to say hello just after the second one a.m. she was only the third human i had spoken with all day . I was on a break from my paper at the time, sitting amidst a tangle of wires on the floor attempting to write a song in AAA form for my songwriting class. Gina inquired into this endeavor, and in my explanation of it i overstepped the bounds of simple differentiation between verse-chorus-verse, ABA, and AABACA to speculate on how song form effects the commercial prospects of an artists — perhaps dwelling on a day spent largely listening to Tori Amos.

I followed this idle chatter across our common area and into her room, by which point the conversation had switched over to inhabit a subject philisophically adjacent to the difference between Bob Dylan and Neil Young. Gina put on her new Donovan hits CD as i tooled around on my guitar in DADGCE, but the conversation eventually turned back to pop construction. After my obligatory monologue about the interrelation of image, genre, and songwriting Gina mentioned how pop music at least kept her awake and functioning during her grueling Saturday 7-hour laboratory class today. This particular exercise in weekly chemical punishment has become a favorite topic of ours, as Gina basically has eleven weeks to play a rousing game of “guess that organic compound” with the five seemingly random samples chosen for her by her instructor. I not only delight in the inherently game-show nature of this particular exercise, but also in the fun things Gina must do in her quest for knowlege.

One less than delightful thing Gina has to do in this quest for knowledge is use an array of photoscopic machinery to determine the nature of her compounds, rather than more traditional means like boiling things and making their colors change. However, Gina did all manner of machine-assisted processes at her co-op job, where she basically spent all day in a lab running reactions on organic polymers. After talking about several aspects of her employment, such as how she spent weeks getting a particular product to the ideal shade of “water white,” we finally came to rest on the benefits and similarities of ultraviolet and electron beam curing of… um… this thing that i’m going to ask Gina to name for me again when i wake up tomorrow morning. Basically, she was testing one element in the process that makes the wierd peely adhesive labels you find on plastic soda bottles, or the gloss and ink sealents on magazines.

This particular thread of conversation went on for a good long time, with several stop-overs for debates of when in their employment life-cycle a worker stops actively attaining/retaining knowledge of applicable technology and begins to merely sustain it. Coming back out of that, i attempted to make my understanding of electron beam curing more complete by asking what it would be more and less efficient to cure. Adhesive labels – good. Magazines – probably. Vinyl flooring – maybe not.


Consequently, Gina brought up that the sealants in questions were similar to those used on fiber-optic wire, which in turn sent me into a five minute discussion of fiber optics based on a presentation i saw in my New Technologies class this week. At the tail end of that it suddenly occured to me that the polycarbonate layer in the middle of a compact disc and the acrylic layer on the outside probably both made use of the chemical technology that Gina had been describing to me for the better part of two hours, and my mention of it lead into a brief overview of how a cd is put together. That in turn lead to an equally brief description of the differences between a CD and a CD-R, which in turn lead to a discussion of how CD-Rs are sometimes hard to read for older units but a cinch for CD-ROM drives. From there naturally headed into error correction and how CD-ROM technology error corrects more than a typical cd drive. And, before i knew what was happening, i was back at copy protection … explaining how sinister it was to corrupt the error correction of a disc to protect it from copying because it would degrade the overall lifespan of a disc.


I knew that extra hour would wind up being useful for something other than sleep.

I just desperately want to be a part of our perceived intelligencia now, after snidely commenting against our sociological debate that we’d be lucky if Drexel could graduate 8% of a class that would qualify for such an honor. Suddenly it’s not enough to give attention-getting presentations or to write witty papers that easily meet and exceed length limits. I want to know classic things… movies and books for me to debate assuredly the way i easily peel “A Day In The Life” apart like so much ripe citrus in front of my sleepy songwriting class who barely collectively own a pair of Beatle’s albums.

Here’s an aside i’m not willing to concede into a pop-up window: How can you ignore the Beatles? I’m the biggest anti-snob i know a lot of the time — choosing to deliberately ignore or discount something that god-awfully popular just because i feel that it’s over-weighted. You simply cannot ignore the Beatles, though, because even if you successfully argue around their innovativeness you’ll still have to bring in ten or twelve other pre-1970 albums to cover the width and breadth that they easily stride in any pair of their albums. Yet, hyper-popular R&B artists routinely confess in my treasured bi-weekly sessions with the Stone that their friends would be surprised that theylsiten to the Beatles. It’s the freaking Beatles, people. Even worse, the fans of these artists are often even ignorant of their own musical antecedents, as my mother discovered when a co-worker who endlessly rants about Mary J. Blige and Lauryn Hill returned to her a blank stare when she started talking about the likes of Martha and the Vandella’s and Roberta Flack (and, i mean, “Killing Me Softly” is just a gimme anyhow). But i digress. I digress because i want to be able to do that for other arts, other things.

Vanity Fair is suddenly written two leagues above my head, talking about influences and movements that befuddle me so much that i don’t know if i should look them up in Elise’s art history book or Webster’s Dictionary. This weekend, awake long past my bedtime, i caught myself browsing the net for Doctoral Programs in Communications … despite having just told someone in the last few months that i was never meant to be called “Doctor.” But i still feel like i’ve just left high-school, or seventh grade, or the womb. I don’t seem to know anything.

I don’t seem to know anything, and today i discovered that i only have eleven classes left with four whopping quarters to complete them in. Not one of them will inform me about the greats in literature, sociological theory, modern international politics, or the rise of technology in society. Not to mention science or math. All of those classes are over, and looking at my all-too-blank schedule for next quarter i find myself debating what to do with my free time: take classes in soc, lit, h/pol, anth, or begin to obsessedly prepare for the GRE’s.

I think this is the opposite of Senioritis. 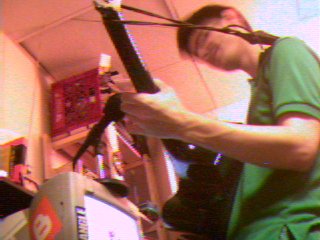 Sadly, it looks as though i won’t make it to the new round of American Idol auditions — the nearest one is in New York City (which is sure to be mobbed) and it’s on Thursday (directly in the middle of my three midterms). I put some serious thought into it before going to sleep, but the slim possibility of getting to perform on television for a few seconds doesn’t seem to balance out against not making it onto Deans List.

Even if the audition was in Philadelphia i might not have wound up auditioning… and not for lack of trying, since “We would like to give everyone the opportunity to audition. Unfortunately, depending upon the response we receive, it is possible that not everyone will get the chance. … [T]he exact method for selecting individuals from the crowd for auditions is subject to the producers’ discretion based on factors such as style, ability and skill.” I still gave the release form a good reading over, just so i could see exactly what kind of awful situation Fox was legally allowing themselves to plunge the contestants into … and, oh boy, there are some funny loopholes in there. My favorite two lines, by far, are as follows (emphasis is mine):

Between those two rules, not to mention the absolutely despotic clause about their rights to utilize your original songs, i think i’m probably better off not auditioning… whether it involves a trek to another state or not. Talent shows come and go, and i’d be better off trying out for one where i get to use some talents other than standing around looking “stylish” and that don’t think they’re allowed to do anything they want due to their obscene amount of popularity.