Freakonomics is an entertaining reminder that correlation does not indicate causation, proof that not all economists are interested in the economy, and a valuable deflator of a few harmful common sense truisms. It is obsessed with subtly pointing out that the word “data” is plural. It’s commentary on apples that are really oranges is purely metaphorical.

It is easy to compare this book with the similar bestseller Blink, by dust-jacket endorser Malcolm Gladwell. Indeed, the subtitle, “A Rogue Economist Explores the Hidden Side of Everything,” seems to jive with Gladwell’s way of carefully evaluating the world through communications-theory tinged lenses.

The subtitle is somewhat of a misnomer. Levitt is considered “rogue” because he delights in applying microeconomics to thorny subjects that are not adequately explained by statistical analysis. He has no overarching theory of anything – just an endless series of slightly counterintuitive but highly logical facts about everything.

Levitt and Dubner’s “hidden side of everything” epiphanies are highly entertaining, and educational. You will certainly be the hit of the watercooler for weeks after reading this book. However, the epiphanies are not especially portable. Knowing that a swimming pool is more dangerous to children than a handgun does nothing for comparing the dangers of a trampoline against a hunting knife collection. All the authors have to say about that is that you’ll need lots of data.

Maybe the lack of long-term impact to your way of thinking wouldn’t seem like such a shortcoming if this book was anything more than a compilation of six over-long magazine articles – the main text barely tops 200 pages. Furthermore, though the book has an extensive works cited, it features no footnotes – meaning you have to turn to the back of the book every time you read something interesting to see if it came from another source.

If any of Levitt’s assertions are valuable beyond passing amusement, clearly that assertion is the link between available, legalized abortion and lower crime rates. This bombshell is dropped in the book’s introduction, and later discussed for almost a full chapter. Though the authors repeatedly disclaim that the data are not meant to support a pro-choice position, it is hard to come away with any other conclusion. Focusing on this aspect of the book might seem like an unfair attempt to politicize a exercise in economics applied to socio-politics, but you could say the same thing about books by Marx or Durkheim. Clearly, Levitt is on to something important, and the fact that he carefully disguises it behind a cleverly non-sequitur title and cover image rather than making it the focus of his first book is insulting, and maybe tragic.

The authors are clearly trying to build a sort of narrative (from drug dealers to abortion vs crime-rate, to parenting, to children’s names), but they clearly run out of steam in the sixth and final chapter, which drones on with lists of names for poor kids, middle class kids, black kids, and white kids. For every list, the findings get less revolutionary, until Levitt is pointing out facts that would barely rate as footnotes, if he had any.

Freakonomics is a quick, lightweight read chunked into six chapters that should each probably be read in only one or two sittings in order to gain their full impact. With a hefty $26 purchase price for it’s brief length it is a book that should be borrowed from the local library, unless one of it’s common-sense-deflators is extremely valuable to one of your social or political causes, or if its cover would look especially appealing on your bookshelf.

I continue to be both flattered and amused by the range of terrific Philly bloggers on PhillyFuture – the Phlogging collective. Flattered because my fine city makes a fair showing for itself, considering that it’s not generally considered to be at the forefront of such electronic things. Amused because, if you are a Philly blogger, I AM YOUR GRANDDADDY. Or, really, considering internet years, possibly even older.

In any event, we’re directly related enough that it’s probably illegal in Pennsylvania for my blog to sleep with any of their blogs. Although, that’s probably considered sodomy here anyway.

(Wow, look at me being all educational and stuff.)

Of the Philly blogs i perused the best layout was definitely Vintage – for a quick recap of their whole deal, check out their best of ’05 feature. (Similar happenings should be occurring here soon, but on a grander scale). 50 Bedroom combines political savvy with a humorous bent towards witty Onionisms. Also amongst the Brotherly lovin’ crowd, i was delighted to find a mom with solid opinions on (overhyped, hard to listen to) hip music. And, she used to live on Ross’s block.

In the “Um, don’t we live in America” category, Her Jazz blogs a story (with video) about cops breaking up a local DIY music show due to a misunderstanding, but subsequently FREAKING OUT and getting violent as they rough up the promoter and are captured doing so on dozens of camera phones. Notable quotable: “I don’t mean to be disrespectful, but we have the responsibility as citizens to record this.” Watch the video (beware, it’s loud).

Back to political news, Philly’s Committee of Seventy has always wanted you to vote, but their Director of Civic Education wants you to get voted for by running for office (via Young Philly Politics). My friend Josh did just that by writing himself in for Judge of Elections, which he now is – for the next four years! Josh is probably the only Judge of Elections i’ll ever play laser tag with.

So, yeah, stop writing in Mickey Mouse. Or else…

In other news, i’m usually not a fan of gimmick weddings, but can a Philadelphian really beat getting married in front of the Franklin Institute Heart? (oops, i punned). That item was logged by ColorWhirl, who also pointed me to the wonderful (though non-Philly) Vegan Lunch Box – a mom who packs very yummy vegan lunches for her little one every day. I had soy taco sloppy joes for lunch today, and they were incomparable!

Vegan Lunch Box is up for Best Food Blog at the 6th Annual Bloggies. Way back when i had a discussion about the nomination process of the 1st Annual Bloggies with founder Nikolai Nolan. In retrospect, i was mostly pissed off that Trio wasn’t (and was never) nominated for “best non-weblog feature” in the days when podcasting meant nothing, let alone had it’s own freaking award category. But, i digress. I stopped being upset when Rabi (another vegan!) won the “best kept secret” award.

Which all just goes to prove my thesis that i am now grizzled and ancienct in blog-years. The end.

Doing some bloggy housekeeping today, so if you should happen to visit and witness things blinking in and out of existence, that’s why.

The most visible change i’ve made so far is the much better implementation of the “hearing” section of the sidebar, which is powered by Brandon Fuller‘s fantastic Now Playing plug-in. The iTunes plug-in, which was a reasonable $10, FTPs your recent plays as a RSS to your website, where you can manipulate just about any information iTunes passes along (number of plays, album, stars, link to your Amazon referred ID, et cetera).

I had been meaning to get album covers up and running, and with only an hour or two of extra work i have it inserted tiny stars and more intelligent play counts. If you buy it and already use a little PHP on your site i’d be happy to help you get it to do what you want it to do.

For a while now i’ve been wanting to include a sidebar RSS feed from an integrated wishlisting website – i.e. one that you’d use for an online Baby Registry if you planned to draw from multiple different stores. Yesterday i found the best implementation of the idea i’ve ever seen, the very smart The Things I Want. After subscribing to the site you create a bookmark(let) in your browser, and whenever you view something you want you just load the bookmark – which guesses the item’s title, price, and image. You can add buy-priority, comments, and tags. So far the only downside is that any RSS feed is of your WHOLE LIST, which is a little cumbersome, but for a relatively new site it already gets a hardy recommendation from this blogger.

If you’re one of those ol’fashioned folks and i’ve recently missed you link, feel free to let me know, as i’m not the obsessive statistic whore that i was in olden days.

My very friendly and generous South-Philly co-worker AnnaMaria bought herself a surround sound system for Christmas. It didn’t work out in her living, so she returned it, but she was unable to return the assembled stands she bought for her speakers.

Our system came with front stands that we co-opted for rear stands; our front speakers have always sat on our front window sills. However, due to the recent parlor-reorg, the speakers are now being a bit obscured.

I volunteered to take the stands off of AnnaMaria’s hands, thinking that we’d use them for our fronts (and maybe the rears too). However, once she brought them over i realized that their system of being screwed on isn’t compatible with the screw-holes on the back of my speakers (thumb included for sense of dimension).

Now, you might have never done a shop-call with me, so let me explain to you that i’m hardly shy about doing things with tools and powered drills and custom-cut bits of wood. However, i am mightily shy when it comes to doing such things to things i own and rent.

So the question i pose is – how would you mount my speakers onto AnnaMaria’s stands? If it isn’t possible i am going to put the stands on Craigslist on her behalf, but i’d prefer to keep them.

If you figure something out, please email me at uprush dot org, to the address krisis (or, if reading on LJ, just comment on the CK-feed).

As someone who has been doing this for more than half a decade, the only thing that amazes me more than the utter ubiquity of blogging is the utter proliferation of blogging trends and tools.

A newer trend in blogging (at least to me, anyhow) is the use of a blog to assemble a well researched academic text. There are two excellent examples i’ve been keeping up with daily. The first, The Long Tail, is (in short) about the 80/20 rule, based on a Wired Article i very much enjoyed. On the second, The Music of Rufus Wainwright, composer and professor Roger Bourland invites discussion of topics ranging from form and phrase structure to the challenges of accurate transcription – all from his forthcoming book examining Rufus’s music in a classical light.

In the tools category, Blogger now fluently accepts phone-posts directly from your cell with no setup required. You simply email a text message or picture mail from your phone to go@blogger.com – blogger sets up a randomly named blogspot page to receive your messages (identified via your phone # and/or phone email) until you claim it and (potentially) assign further messages to another blog. As you’ve seen from my recent posts, it can even upload your pictures via FTP. Read more at Go Blogger. Currently supports posts from Verizon, AT&T, Cingular, Sprint, or T-Mobile.

In a blogging world of academic tomes and phone posts and the dreaded LJ-meets-Facebook bohemeth that is Myspace it boggles my mind to think that five years ago i was the only boy on the internet singing songs specifically to be published on my blog. 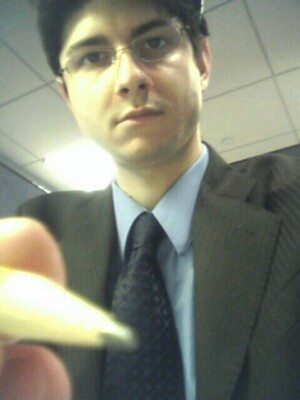 I have decided that monday is suit day; if i’m going to be exhausted i might as well do it with authority.