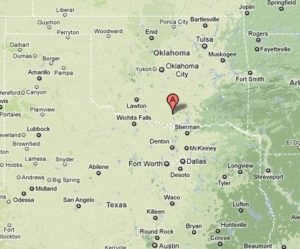 Ardmore is a business, cultural and tourism city in and the county seat of Carter County, Oklahoma, United States. It is located 90 miles (140 km) equidistant from Oklahoma City and Dallas/Fort Worth, Texas at the junction of Interstate 35 and U.S. Highway 70, and is generally considered the hub of the ten-county region in South Central Oklahoma, also known by state tourism pamphlets as Arbuckle Country and Lake and Trail Country. Ardmore was named after the affluent Philadelphia suburb and historic Pennsylvania Main Line stop Ardmore, Pennsylvania.