Also from MeFi’s point of contact: “From what I understand, the building had a lattice structure that was dependent on itself. If it had a column structure, damage to the top would not have caused the entire building to collapse. However, catastrophic damage to any part of the lattice brought the buildings down. Keep in mind that I am not a structural engineer.” 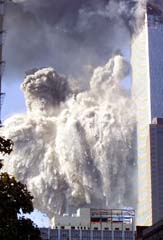 Links culled from starting with today’s MeFi: Confirmation of my previous blog.. MeFi’s point of impact. Choire introduces a very real human blow by blow reaction. Incredible picture and human reaction piece. X-10 camera ads redirect to blood donation information. Bin Laden warned of “unprecedented attacks” but currently denies a connection. Rebecca Blood: my greatest fear is how our government is going to respond. more erosion of freedom in the name of security. mark my words. A world in black in white, from Salon. Smoke reflects on national weather radar. AP news WTC photo slideshow. … more as i find it, but MeFi is a good source.

ABC – A short piece on the four planes involved in today’s tragedy confirms some chilling details. First, telephone contact was made from each of the four planes to family and airline operations crew on the ground. A phone call from a stewardess on the first plane gave report of multiple hijackers who were wielding small box-cutting knives. She did confirm the seat number of one of the attackers and said many of the other attendants had been injured. Reports from two of the other planes confirm the multiple hijackers and the use of small utility knives. The plane out of Newark that crashed in midstate PA reached as far as Ohio before altering its flight path. There are unconfirmed reports that someone from the cockpit called the FAA and requested that the plane alter their flight path so that they could come down in Washington; perhaps from as far away as Ohio the pilots were not overtaken in the same fashion that it is speculated in the other cases. There is still no word about the circumstances surrounding the eventual crash southeast of Pittsburgh.


All four planes were lightly booked for today. All of them were Boeings capable of seating upwards of one or two hundred passengers. Total casualties from the planes themselves seems to be confirmed at 266, which in comparison to commercial airline crashes in recent years is astoundingly low.

And, please Mr. Bush and CNN, stop shoving the fucking bible down my throat. I know my Psalms, thank you very much.