I’ve always been constitutionally incapable of dealing with heat.

My mother was the opposite. You’ve never met anyone more eager to bake in the sun on a sandy beach than this woman. She would wake me up before 7am when we were vacationing at the Jersey shore to let me know she was headed down to the beach, already equipped with her chair and her book.

(I would spent the day reading in the cool confines of the hotel room, punctuated by occasional trips to the pool.)

Memories of being hot as a child are on my brain because our central air conditioning is mysteriously on the fritz at the moment. It turns on and works mightily for anywhere from 5 to 30 minutes, and then its double-breaker in the basement trips with an audible CLACK. The first few times it happened I simply reset the breaker, but breakers trip for a reason and continually flouting that reason with manual intervention seemed unwise.

We’ve kept EV6 and I entertained and cool throughout this week with a combination of car trips, mall walking, and cold showers. It’s the nights that are getting to me. Like a video game character who cannot recover hit points while he’s poisoned, I don’t actually seem to derive any sort of restorative qualities from sleep when I’m feeling too hot. We are now on day five (the repairman is due tomorrow) and I am starting to feel delirious.

It reminds me of childhood nights spent at my paternal grandmother’s house, which was equipped with fans and a single air conditioner suspended above the kitchen door which I saw turned on only once in my life.  On those hot nights I would sprawl in the middle of a couch or bed, arms outstretched to find the hidden cool spot on the top sheet or beneath a pillow as I counted the slow seconds until morning. END_OF_DOCUMENT_TOKEN_TO_BE_REPLACED 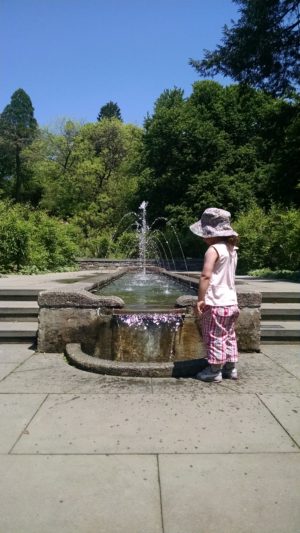 One of the most amazing things about spending the past year at home full-time with EV6 has been making so many memories.

I don’t just mean that in the glib way of, “every day together is a new memory,” although that’s certainly true.

It seems that I began my time off right on the bounds of the period of time where EV6’s long-term recall really kicked in. She has a few fleeting recollections of events prior to last April, especially ones where she’s seen many photos to reinforce them.

Yet, starting around the time I began to take trial days off from work, her recall is incredible – crisp and complete, even for adventures I didn’t capture in photos and have since all-but forgotten.

One example is Morris Arboretum. This was one of the first big new things we did together last spring in a special team-up adventure with our friend Miss Jess. At the time, EV6 was a bit too young to appreciate the rose garden and abstract structures. What stuck with her was their “Out on a Limb” setting, where you can climb from tree to tree like a bird or a monkey on a series of platforms and nets.

EV6 has brought it up from time to time in the past year, but when Spring hit us in full bloom in the past few weeks it suddenly became the only special trip she’d request! 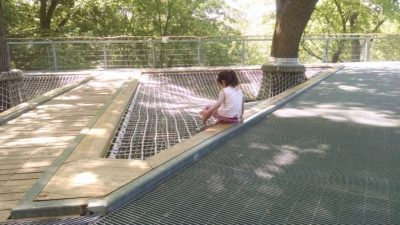 Finally, our free day lined up with beautiful weather, and so when I woke up EV6 on Wednesday morning I announced, “It’s time to go back to the Arboretum!”

Obviously, Out on a Limb was the first thing we bolted for when we arrived. EV6 was a bit tentative on the nets last year, but this year she was like a spider crawling on a web! We spent nearly an hour clambering around, pretending to be animals, and making friends before we continued to other experiences.

Another big draw for kids at Morris is the Garden Railway, a small-scale village with a network of intersecting train tracks criss-crossing it. It doesn’t open officially until Memorial Day, but we lucked into the staff performing a check-up on some of the trains so we got to see them in action.

I’m not one for watching miniaturized trains circulate on a track, but the incredibly manicured greenery along its path is just as much as a draw. Together, they lend the feeling of peering into some sort of enchanted tiny world. 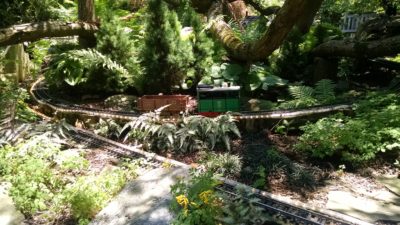 We’ve grown to be massive fans of Longwood Gardens in the past year, so it’s hard not to compare that with every garden or hike adventure. Morris Arboretum isn’t as sprawling as Longwood, or filled with as many cultivated gardens and flowers. However, there is the sense of being inside of nature at Morris, rather than just walking past it on a path or seeing it on display.

While I still say a Longwood Garden membership is the best deal for the least-crowded attraction, it’s a real commitment to drive there. If you want to stay more local and be surrounded by just as much greenery, Morris Arboretum is a wonderful substitute.

Last night Lindsay and J gave me the night off from cooking my elaborate bi-weekly desserts and substituted making s’mores! 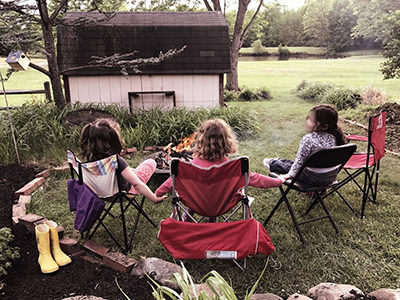 It was EV6’s first time roasting marshmallows over a fire, made all the more amusing by the fact that L&J’s fire pit is actually EV6’s Nana’s old, unused fire pit, given to her by E & I as a  birthday present early in our relationship, which was later upcycled by L&J after Nana abandoned it in the process of downsizing to a smaller abode!

Personally, I’m not really a fan of anything sticky nor made of chocolate, so I was more on marshmallow roasting duty than anything else … which I completely failed by setting our marshmallow on fire.

I shook it furiously to try to put out the flames while Girl Scout Lindsay admonished from over my shoulder, “Never shake the marshmallow! Give that to me!”

It’s good that I have people like this in my life, because honestly without them it’s likely that calamity would befall me every time I set foot outside into nature.

Last night I went to an actual dance class for the first time.

Not Zumba. Not step-aerobics. A dance class in Philly for parents, adult beginners,  and other gawky human beings with necks like storks.

I’ve always loved to dance, ever since my mother would hold impromptu dance parties in our living room to records like Rufus and Chaka Khan and CeCe Peniston’s “Finally.” I lived for weddings and school dances, where I had an excuse to show those skills off on a real dance floor.

For whatever reason, it never occurred to either of us that I ought to take an actual dance class. While I’ve gone mashed-potato for mashed-potato with my mother for years, it isn’t quite the same thing as learning choreography.

In the ensuing years I’ve taken a lot of gym classes with dance elements, but they’re always more work-out than dance steps. I had one fantastic Zumba instructor who did the bare minimum of Zumba and then plugged in tons of great pop and hip hop into the rest of the class and pretty much treated it like we were training to be in music videos. I was sorely disappointed to find that wasn’t the norm in other classes.

Ever since then, whenever I meet new people doing any kind of fitness-related thing, I always ask them, “Have you ever been to a real hip hop dance class for adults who have never danced before? Like, I want to get as close to Janet Jackson’s Rhythm Nation 1814 as I possibly can.” END_OF_DOCUMENT_TOKEN_TO_BE_REPLACED

This week brought an all-new adventure for us – The Delaware Children’s Museum!

We loved this museum. It is a completely different beast than the well-known Please Touch Museum in Philly.

Please Touch is themed around small-scale, hands-on activities and role play, and it’s kind of expensive at $19 a person, plus parking! If you’re going to go more than twice in a year you might as well be members.

Delaware Children’s Museum was much more geared to larger exhibits and full body engagement, whether that’s climbing, zooming around on person-powered scooters, or playing dress-up on a pirate ship. It had six large play areas, some with just a single theme (like climbing or scooters) and others with multiple engagements (a lemonade stand and restaurant with other counting activities). 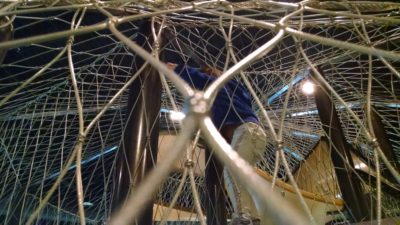 It’s also just $9 per person! And, not for nothing, it’s in the middle of a huge, free parking lot with two decent restaurants, as opposed to Please Touch, which is somewhat isolated.

EV6 probably would have spent her entire day just exploring the ant-hill climbing structure directly inside the front door, but she also enjoyed the physical fitness exhibit and retooling the magnetic race car.

The drive to Delaware from our house is only about 10 minutes difference, and it seems like the museum is much less crowded on weekdays. This Spring Fling gets a solid thumbs up from both EV6 and I.