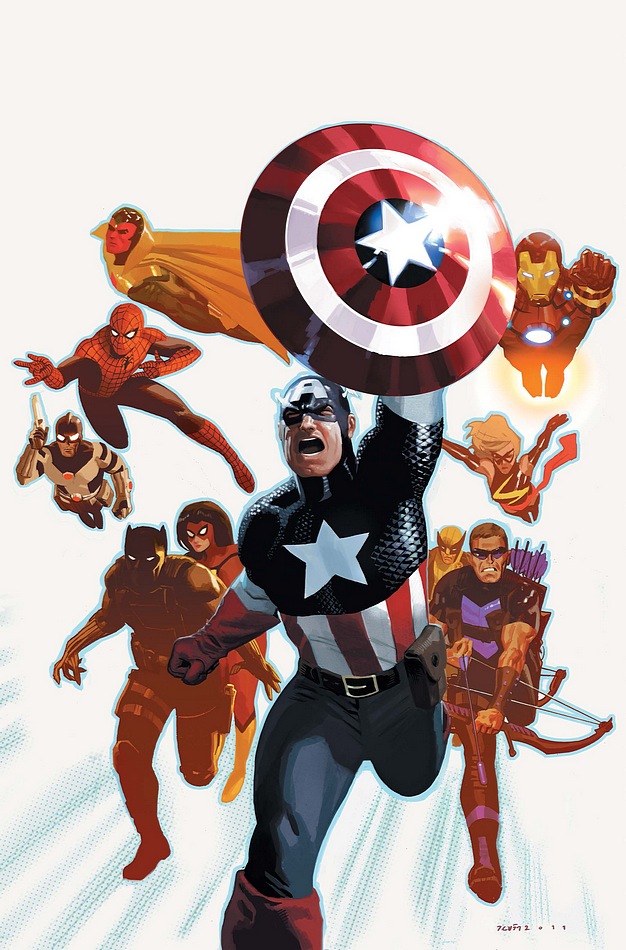 In 2005, Marvel stopped publishing a comic called “Avengers” for the first time since 1963. In its place was the Brian Bendis helmed New Avengers, and later Mighty Avengers along with it.

That changed in 2010, when Marvel and Bendis launched the twin flagship books of Avengers and New Avengers, each focused on a different element of the team. From that point forward, the Avengers franchise would have at least two headlining titles in each period.

That is what this guide tracks – the flagship Avengers titles from 2010 and forward, as well as any supporting books that are tied in closely with them.

In the wake of Siege, Brian Bendis finally reassembles The Avengers as a team of heavier hitters that can deal with epic threats like time travelers and the Infinity Gauntlet!

(Really, this team is not so different than the team that originally launched New Avengers, simply replacing Sentry with Thor.)

as recollected in complete collections… 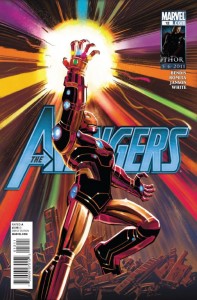 #1-6: Avengers by Brian Michael Bendis: Heroic Age Oversize Hardcover (ISBN 0785161988)
A comprehensive collection of the first arcs of Avengers (#1-6), New Avengers (#1-6), and the Avengers Prime mini-series (#1-5) focused on the trinity of Captain America, Iron Man, and Thor.  If you choose to buy the first volumes of the two main series separately, Avengers Prime is available as its own trade paperback and hardcover.

I believe Avengers: Children’s Crusade Oversized Hardcover fits best here, but Marvel’s EIC says it belongs after Fear Itself. See its entry on the Marvel Events page for more on my reasoning.

New Avengers maintains the theme of its prior volume by focusing on a street team of heroes able to handle more knock-down, drag-out threats than cosmic ones. It also continues the story of Luke Cage and Jessica Jones, and includes more of Bendis’s familiar heroes chatting around breakfast.

As recollected in a pair of Complete Collections, with their numbering continued from the prior volume 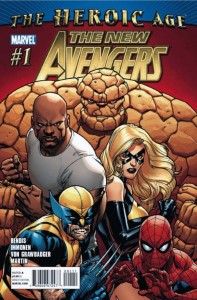 #1-6: Avengers by Brian Michael Bendis: Heroic Age Hardcover (ISBN 0785161988)
A comprehensive collection of the first arcs of Avengers (#1-6), New Avengers (#1-6), and the Avengers Prime mini-series (#1-5) focused on the trinity of Captain America, Iron Man, and Thor.  If you choose to buy the first volumes of the two main series separately, Avengers Prime is available as its own trade paperback and hardcover.

In 2012, Marvel launched a new Avengers title that was unique in not presenting a specific team or central mission. Instead, Avengers Assemble was launched as the perfect starting point for fans of the Avengers movie to leap into comics – it included the same team of heroes, and featured a villain from the movie. 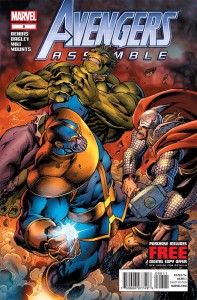 Of course, that was only the first arc. From there, it keeps the mandate of continuity-light stories featuring the movie Avengers as well as Spider-Woman, Captain Marvel, Wolverine, and Spider-Man.

Avengers vs. X-Men: See Marvel Universe Events: Avengers vs. X-Men. There is much debate as to whether this occurs before or after the Thanos arc in #1-8. I choose to place it here because (1) the team is headquartered in the Tower rather than the mansion (where they move after AvX), (2) no Scarlet Witch in the vast cast of Avengers in #8 (though she is clearly active after AvX), and (3) Hulk’s appearance in #1-8 contextualizes his arrival late in AvX.

#14-15: See Marvel Universe Events: Age of Ultron. This pair of issues is not in continuity, but instead in the splinter continuity of AoU, and are collected only with its tie-ins.

#21-25: Avengers Assemble: The Forgeries of Jealousy
Part of Inhumanity, co-written by Warren Ellis! This fun girl-power romp starring Arana the Spider-Girl sees the series through its end. It is ostensibly replaced with Avengers World.

Fresh off of a critically acclaimed run on Fantastic Four and FF, Jonathan Hickman is the first new helmer of Avengers in nearly a decade. He makes the changes of status quo clear by completely altering the tone, scope, and cast of both of the Avengers flagship books. 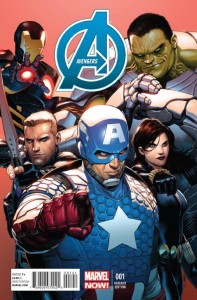 In Avengers, Vol. 5, Hickman introduces a cosmos-threatening event and a oversize team of 18 Avengers to deal with it with a new comic shipping every two weeks! The team includes all five familiar “movie Avengers,” the now-obligatory Spider-Man and Wolverine, plus other comic mainstays like Captain Marvel and Spider-Woman. Oh, plus some newbies like former New Mutants Cannonball and Sunspot and totally left-field picks Hyperion and Smasher!

Meanwhile, New Avengers, Vol. 3 could easily be titled “The Illuminati,” as it focuses on the powerful heroes who are trying to control the fate of Earth and a full set of Infinity Gems. The stories in this title weave between those in Avengers to add more context to the overarching story there.

Finally, the new Avengers World takes a broader look at how the team plays a role around the planet in the wake of Infinity.

Since all three titles are penned by Hickman (with some assists from Nick Spencer), they fit together in relatively tight continuity.

as a pair of omnibuses…

Avengers By Jonathan Hickman Omnibus Vol. 2
Collects two oversized harcovers as well as Time Runs Out, which was nearly an omnibus in size on its own. Collects Avengers (2012) #24-44 and New Avengers #13-33.

as a series of oversize hardcovers… 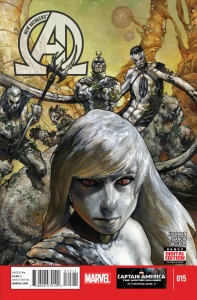 Avengers: Endless Wartime OGN Oversize Hardcover
An in-continuity original graphic novel by Warren Ellis starring Captain America, Iron Man, Thor, Wolverine, and Captain Marvel. It could be just prior to the expansion of the team due to the events of Avengers and New Avengers #1, but it could also be in the brief break in action prior to the prelude to Infinity. Also available in paperback.

Avengers #12-17: Vol. 3: Prelude to Infinity
Issues #12-13 are not integrated with Infinity, below. All of this volume can be read prior to the start of Infinity – issues #14-17 are collected alongside Infinity, but they are an uninterrupted prelude story. Available in hardcover.

In the wake of Infinity, a Avengers World launches as a third title, telling stories with the team that do not connect to the main plot that was moving forward to Secret Wars. 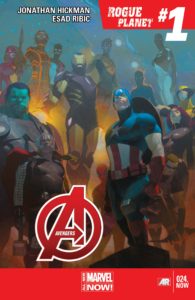 New Avengers #18-23: Vol. 4: Perfect World
Read issues #16-17 (from the prior collection) directly before this. Available in hardcover

Avengers: Millenium
A digital-first comic. Includes a octogenarian Cap, so it is likely from prior to Axis

Time Runs Out introduced an 8-month spring-forward in the Avengers timeline, which gave other Marvel books time to wrap up their stories while Hickman played out the endgame that lead to Secret Wars 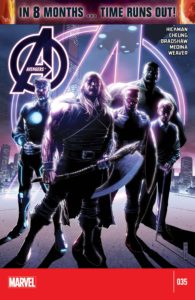 Avengers #35-37 & New Avengers #24-25: Avengers: Time Runs Out, Vol. 1
Begins an eight-month forward jump in time in the two primary Avengers titles, placing them ahead of all the other books in the line until they catch up in May 2015. Available in hardcover.

Avengers: Rage of Ultron OGN oversized hardcover
An original Avengers graphic novel by the superstar Uncanny X-Men team of Rick Remender and Jerome Opena. This is definitively post-Axis and includes a female Thor. It can be read as the first post-Secret Wars Avengers story.

This era launched with a pair of surprising Avengers teams. 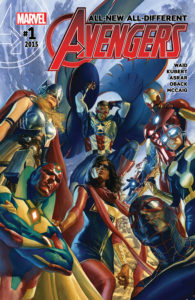 Mark Waid’s All-New, All-Different Avengers could fairly be called “Avengers: The Next Generation” with a team of fresh heroes like Kamala Khan as Ms. Marvel, Mike Morales as Spider-Man, Sam Alexander as Nova, Sam Wilson as Captain America, and Lady Thor, plus Avengers veteran The Vision.

Meanwhile, Al Ewing’s New Avengers dealt with one of the fallouts of the Hickman era – a destabilized AIM ripe for takeover. However, the “who” of the taking over was a shock – Sunspot, Cannonball, Hawkeye, Songbird, Wiccan, and Hulking, among others.

Occupy Avengers Vol. 2: In Plain Sight
Collects #5-9, some of which ties in to Secret Empire.

In this era, all of the still-running running Avengers titles (Avengers, U.A.Avengers, and Uncanny Avengers), their casts, and their authors have merged into a single run of weekly Avengers comics called “No Surrender.”

Quicksilver: No Surrender
This five issue mini-series steams from Quicksilver’s fate in No Surrender. Technically, it falls into Fresh Start, but with “No Surrender” as the definitive story in Marvel Legacy it feels like it also fits here.

Avengers: Back to Basics
This six-issue limited series had a present-day framing sequence with Jarvis and Kamala Khan, but mostly takes place in retcon flashback tales of past Avengers adventures.

Launched by Jason Aaron and Ed McGuinness, this is a literal fresh start for the team – it doesn’t specifically continue from any existing plot.. The cast includes a core of Captain America, Iron Man, Thor, Captain Marvel, Black Panther, and She-Hulk, with other heroes rotating in and out of the team – including Doctor Strange and Ghost Rider (Robbie Reyes).

Back to Collecting Avengers Graphic Novels: A Definitive Guide