There is a recurring theme in today’s X-Men Gold #1: “past is prologue.”

It’s a theme I lean into heavily in my every day life. Being obsessed with data and truth tends to emphasize the impact of the past on the present. Most fresh starts in life consist of actors with past track records of behavior, models of behavior that have previously been described. They aren’t really that fresh

That’s part of why everyone loves a sudden success story, whether that’s an indie movie or a hot new start-up. It’s not just the success we’re celebrating, but the subversion of trends and predictability.

When you swim in the data of a thing all the time, it’s really hard to be pleasantly surprised by those fresh starts. I looked at the return order probability of hundreds of start-ups. There was no novel return curve to discover. After the first few dozen, everyone snapped into a story I had seen before.

Comics can feel like that, too. It’s a tiny industry where the most read book never even approaches a million eyeballs (and I’m counting individual eyeballs here, not pairs). 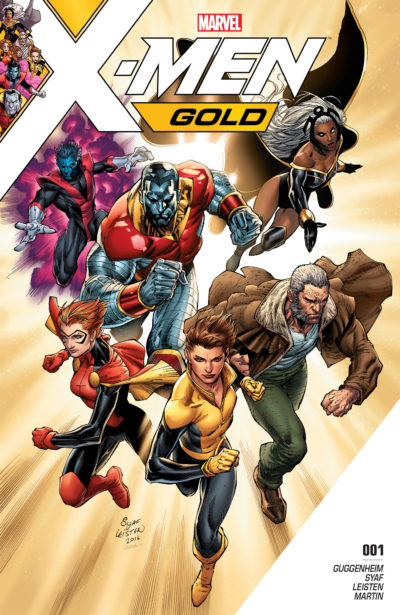 Past is prologue. We’ve seen it before, so we know what we’ll see. And, like in the rest of life, we’re pleasantly surprised when we get something truly novel…

…and then we want more and more of that novel thing, until it’s our new past and becomes our next prologue.

When Marvel or DC say they are launching something “new,” it’s with the caveat that a seasoned reader already knows the introduction to this story.

The question is: does that mean you can predict where it will wind up?

Written by Marc Guggenheim with pencils by Ardian Syaf, inks by Jay Leisten, colors by Frank Martin, and letters by VC’s Cory Petit.

CK Says: Buy it! Bottom Line: Guggenheim’s new take on flagship X-Men feels familiar and maybe a bit fan-service-y, but that doesn’t stop it from being remarkably fresh as it achieves its back-to-basics aim: the X-Men feel like heroes again.

Marc Guggenheim takes his second swing at the X-Men in three years, and this one is a solid hit. X-Men Gold is a delightful first issue with hints of many past teams, but it has a fresh outlook that’s intent on minimizing the recent past as leaden prologue weighing the series down from the start.

The X-Men’s past being prologue isn’t something you’ll often hear me lament, 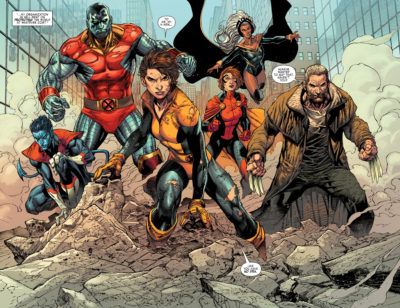 as a studied X-fan of over 25 years. I’m all for continuity-dense mining of years of history, but Guggenheim -the successful creator of CW’s Arrow – was wise enough to know now isn’t the time.

What’s X-Men Gold all about? The story’s title says it all: “Back to Basics.”

The X-Men are back to being a team who scrambles the Blackwing because they hear someone is in trouble – mutant or not. Or, at least, that’s what newly-minted leader Kitty Pryde wants them to be, which is how we wind up in medias res with the team facing down Terrax, whose previous X-book exposure comes solely from Dazzler.

Why are they fighting him? Because The Avengers and The Champions didn’t show up and the X-Men are heroes. END_OF_DOCUMENT_TOKEN_TO_BE_REPLACED