The film Attack of the Clones (2002) occurs in 22 BBY, starting with the assassination attempt on Senator Amidala and ending with her secret wedding to Anakin Skywalker. This period of canon stories continues through The Clone Wars television show and films through 19 BBY, when Revenge of the Sith begins with the rescue of Chancellor Palpatine from Count Dooku.

Star Wars: Episode II – Attack of the Clones and its adaptations 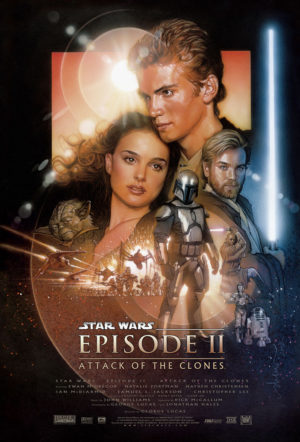 Novel by R. A. Salvatore (hardcover / paperback / digital)
This adaption predates the New Expanded Universe, but as a film adaptation the material is still adjacent to canon if not official. 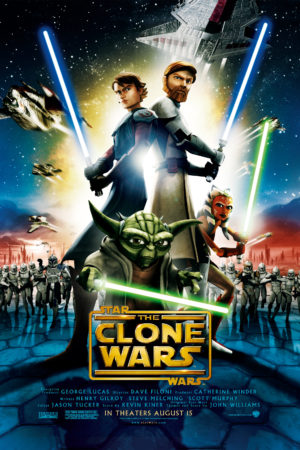 Attack of the Clones and its adaptations occur here.

The Clone Wars: Unfinished Episodes – The unproduced episodes of Clone Wars Season 6 were released as storyboard animatics and are considered canon.

Short Story: “Kindred Spirits” is a short story from Star Wars Insider 159 that is a prologue to Dark Disciple.

Comic: Darth Maul—Son of Dathomir #1-4 in Star Wars: Darth Maul – Son of Dathomir
Also collects material from Star Wars Tales #7-9. This was the final Dark Horse Star Wars comic, adapted from unproduced scripts of Clone Wars – which places the story after Darth Maul’s apparent death at the end of Episode I. For a few years, its Dark Horse collection (ISBN 978-1783295166)  was sold for astronomical sums, as it was relatively short-printed (especially compared to Marvel books)!

Novel: Catalyst: A Rogue One Novel by James Luceno (hardcover / paperback / digital)
This story occurs from 22 BBY to 17 BBY.