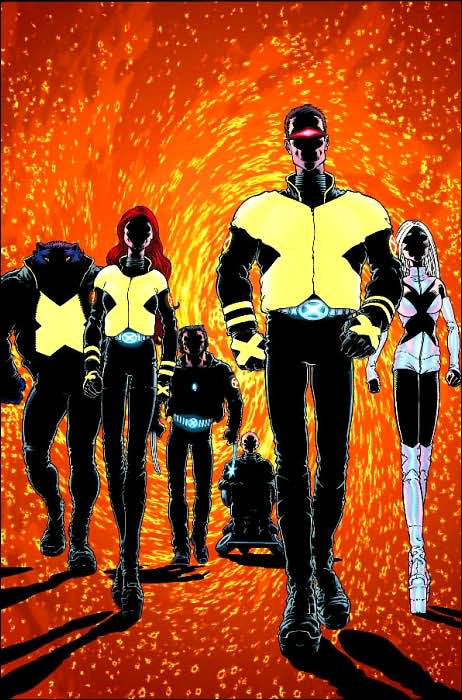 Morrison created the first definitive period in the book’s history, stripping down the team to the bare bones of Cyclops, Jean Grey, Wolverine, Emma Frost, and Beast – all acting as the staff at the Xavier school. Notably, he forged the Cyclops and Emma Frost relationship that exists to this day, and was the first writer to develop Jean Grey in years.

Associated Content provides a fantastic guide to understanding Morrison’s run on the book and the symbolism of each team member.

After Morrison’s run ended in 2004 the book reverted back to its prior X-Men, Vol. 2 name while maintaining its issue numbering. Meanwhile, the remainder of his team moves to Joss Whedon’s Astonishing X-Men.

The thirty-one issue run of New X-Men is collected three ways – one massive tome, six smaller books, or three bigger ones. The final two issues of the New X-Men era cross over to an Uncanny X-Men collection and are collected separately; they are written by Chuck Austen.

as as single omnibus… 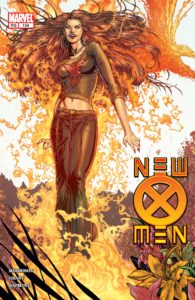 #114-154 & Annual #1: New X-Men Omnibus (2012 printing) (ISBN 0785165053)
The improbable has occurred – Marvel reprinted their most in-demand omnibus! The prior edition (ISBN 0785123261, glued binding) had crossed over from collection to collectible, but this new edition is available for retail price. It is printed with much thinner paper, which makes for a lighter, thinner edition. The original volume has the cover of #114, shown above. Reprinted again in 2015 and in 2016.

as eight digest-sized paperback books (prior printings were full-sized) 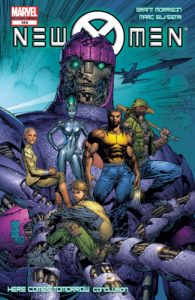 #139-145: New X-Men by Grant Morrison – Book 6 (ISBN 0785155376)
This Wolverine/Cyclops adventure focuses on Fantomex’s origin in the accelerated time laboratory “The World.” It is not strictly necessary to read this portion of Morrison’s run. Previously released in full-size format as New X-Men Vol. 5: Assault on Weapon Plus.

#146-150: New X-Men by Grant Morrison -Book 7 (ISBN 0785155384)
Morrison rushed through the Magneto-filled climax of his run, which makes this trade one of the most uneven. Previously released in full-size format as New X-Men Vol. 6: Planet X. Recollected in 2018 as X-Men: Phoenix in Darkness by Grant Morrison along with the contents of Book 8.

#151-154: New X-Men by Grant Morrison – Book 8 (ISBN 0785155392)
This alternate-future tale has little impact on the present-day, other than canonizing the Scott/Emma relationship. Previously released in full-size format as New X-Men Vol. 7: Here Comes Tomorrow. Recollected in 2018 as X-Men: Phoenix in Darkness by Grant Morrison along with the contents of Book 7.

all paths lead to this paperback:

Begins in July 2004 concurrent with the X-Men Reloaded event – parallel to Uncanny X-Men #444 and the launches of the Whedon/Cassidy Astonishing X-Men, Excalibur (vol. 3), and New X-Men: Academy X. Also, it was just two months into the run of Cable & Deadpool.

In the Marvel Universe, House of M occurs halfway through the run.

All of the X-Men titles experienced a “Reload” after Morrison’s lengthy storyline concluded.  Chris Claremont retook the role of writing on Uncanny with original Excalibur artist Alan Davis. Meanwhile, former Uncanny and X-Treme artist Salvador Larroca switched to the once-again adjectiveless X-Men book for the majority of this run, along with a handful of writers – primarily Peter Milligan. 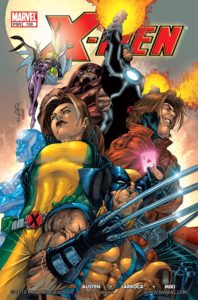 The team for the beginning of this run was Gambit, Havok, Iceman, Juggernaut, Polaris, Rogue, Wolverine, and an intermittent Emma Frost. At #171 Wolverine and Emma Frost switch, with Emma becomes a permanent member and Wolverine appearing sporadically. The team varies for the Apocalypse arc.

as recollected beginning in 2019…

In the Marvel Universe, it begins in the midst of Civil War.

The team revolved in these issues, but generally included some combination of Cannonball, Cyclops, Iceman, Mystique, Rogue, White Queen, and Wolverine, in addition to other heroes.

The creative team for these twenty issues was writer Mike Carey with artists Chris Bachalo and Humberto Ramos – both of whom use a less-realistic, animated style of illustration. After Messiah Complex, Marvel rechristened the book X-Men Legacy, though it continued its numbering.

as recollected in a single volume in 2018

#188-199: X-Men: Supernovas (ISBN 0785123199)
Features a team lead by Rogue that includes Iceman, Cannonball, Cable, Mystique, Lady Mastermind, Karima Shapandar, and an unwilling Sabretooth. This collection is a major favorite of fans, partially due to outstanding artwork from Chris Bachalo. Also collects an annual. Also available in oversized hardcover. [Ed Note: I feel that Bachalo’s artwork really benefits from the oversized format, and this HC tends to be pretty cheap.]

#200-204: X-Men: Blinded by the Light (ISBN 0785125442)
A brief, somewhat-confusing story that helps to set up the situation between Rogue and the Marauders in Messiah Complex. This volume can be very hard-to-find.

X-Men: Endangered Species
Collects a Beast-centric story about trying to find the scientific means of jump-starting the mutant gene from a series of backups from the prior run of issues. While it’s low-key, it’s effectively a prelude to Messiah Complex (and has the same trade dress). Also available in oversize hardcover.