Not to be a newsmonger, but i am a Journalism student, and so far the coverage of this is ridiculous. 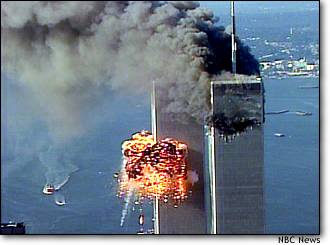 Two planes crashed into the World Trade Center towers in New York City this morning within less than a half hour of each other. So far there is no official word on the motive or on any casualties. The first plane struck shortly before 9am and was described by witnesses as a small twin engine passenger jet. A witness from Dow Jones was quoted as stating that “it looked like the wing crashed down to the street” despite the fact that the majority of the aircraft remain lodged in the upper floors of the building.

The second plane was filmed by television cameras already present as a result of the first crash, and appeared to be a Boeing 737. MSNBC reports that “the FBI said it was investigating reports of a hijacking. A United Airlines employee said he had heard reports that an American Airlines jet had been hijacked and was one of the two aircraft that flew into the center. It was not clear if there were passengers on board.”


The last infamous terrorist attack on the World Trade Center occurred on February 26th, 1993 in the form of a truck bomb. The blast killed six people in injured over a thousand others.


I’ll continue to update with distilled news as it breaks.