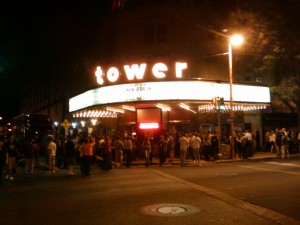 Opener Wavves may have been dreadful – we couldn’t especially tell under the muddy, unspecific mix that obscured just about every element of their performance except for occasional super-cool falsetto wailing from the bassist.

From hearing a sample of Wavves on record, the mix seems to match their lo-fi noise pop aesthetic. I’m all for lo-fi, but in a huge concert hall cleaning up the mix a little probably would have doubled their pull of new fans. Wavves did have a certain post-Pixies charm similar to Nirvana’s radio-ready moments in that they were playing hyper-catchy – almost bubble-gummy – melodies beneath the layer of reverb and noise.

Sub-headliner Jenny and Johnny were solid and enjoyable. The Jenny of the band is Jenny Lewis of Rilo Kiley, who is perhaps my current favorite live female vocalist for power and tuneful consistency. That was present in spades at The Tower, as was J&J’s “harmony is melody” aesthetic, wherein almost every part of every song layers both of their voices with equal precedence in the arrangement. It’s a throwback and a bit alt-country, but I really like it – Lewis is wasted relegated to backing vocalist, but the band has to somehow distinguish itself from her solo efforts. 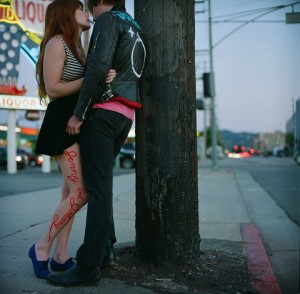 Not relevant in the context of the review of her music, but Jenny Lewis is smokin' hot.

Jenny and Johnny’s mixing was rather impeccable, especially considering every standing member of the band traded off their instrument at least once – meaning a variety of playing styles on the same axes and amps. I was impressed that their riffs and lyrics stood out despite my only know a couple of songs in the set. While they’re not up to Rilo Kiley levels of awesomeness yet, I’m pretty excited to hear their record post-show. Maybe more hooks will jump out at me than did when I previewed it.

After J&J we were reasonably excited for Phoenix (having forgotten about Wavves entirely). E is the Phoenix fan, not I, so I only know tunes from the Wolfgang Amadeus Phoenix disc. I made a conscious decision not to cram their other material into my head prior to the show so I could just absorb their music with a fresh set of ears.

The band came out swinging hard – a one-two punch of an intense “Lisztomania” and “Lasso,” followed shortly by a fantastic version of “Fences.” Vocalist Thomas Mars was a little lost in the mix against the heavy tom-focused drumming (two sets of them!), but it’s not like intelligibility is a trademark of the band. “Fences” is what made me most excited, as its subtler, trance-ish elements translated perfectly from the record.

With the opening salvo completed the Wolfgang fans in the crowd were quickly placated, but this is where a few things went awry. 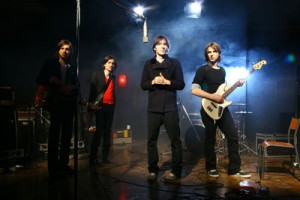 First, Phoenix just doesn’t DO anything. That’s not to say I was expecting choreography, but a stationary band can still be interesting to watch. I was completely arrested by Paper Route last year without knowing a single song, because they were just so damned compelling on stage. Phoenix were seriously lacking in the charisma department outside of Mars, and he was ineffectual in holding space in the middle of the staging. The lighting didn’t help – almost entirely bright, piercing whites that alternately silhouetted the players and blinded the audience.

After a few more songs, I gave up on watching and sat down to close my eyes and absorb. Nothing wrong with that – it’s what I do at Radiohead concerts.

At some point the band shifted to moodier instrumentals (totally cool with me), but accompanied that with dropping a white scrim in front of them so they were reduced to literal silhouettes and nothing more. I didn’t note this, since I was absorbing with eyes closed, but E was still standing and not a fan of the minimalism.

Still, both of us were still mildly entertained at this point. I was enjoying meditating on the unfamiliar songs.

Then came the low end.

I can’t even describe it. A word that enters my mind is “punishing.” At some point the bass turned from springy supporting tonality to an industrial grade weapon. It wasn’t just low or loud – it was distorted and wobbling the entire room in its wake. I could feel it in my chair. It completely obscuring any tonality above it in the mix. If the bass player stopped for a moment, the mix got awesome – and then he’d come back.

I thought maybe it was just for a specific song, but it kept going on and I was getting increasingly fidgety and uncomfortable in my seat. Even with ear plugs to minimize the crushing volume I was starting to feel a little ill from the assault. I felt more ill in sympathy with the folks beside us, listening sans ear plugs.

Suddenly, E leaned down and tapped me on the shoulder: “Do you want to go?”

Still somewhat committed to toughing out the low end assault, I replied, “No, I’m fine sitting here, I’m not bored.”

“That’s fine, but I really want to leave.”

Halfway puzzled, I collected my jacket, squeezed out of our row and walked out to the lobby with E.

It turns out that the she was having the same low end issue I was. She couldn’t hear anything but bass, and I quickly discovered that it had actually messed with her equilibrium, because she was just as wobbly on her feet as I felt in the chair.

The Phoenix show marks the first time I’ve ever left a concert before the encore when I was there to see the headlining act … and I’ve seen a lot of concerts. The performance itself was okay – nothing special – but I honestly don’t know how we could have possibly survived any more of that bass.

I’m not sure if it was a bum night of mixing, faulty equipment, bad acoustics in The Tower, or some other circumstance, but if not for the interlude from Jenny and Johnny it would have easily qualified as the worst big concert I’ve ever attended. If the band meant it to sound that way they’re idiots.

Much thanx to The Key for sponsoring this trip, even if it didn’t turn out as awesome as we had hoped. They’re a great blog! Read them!