On Saturday night Filmstar (the band fronted by E, with me on bass) played the Sugartown concert series at Tritone, and had a lot of sweaty fun doing it. 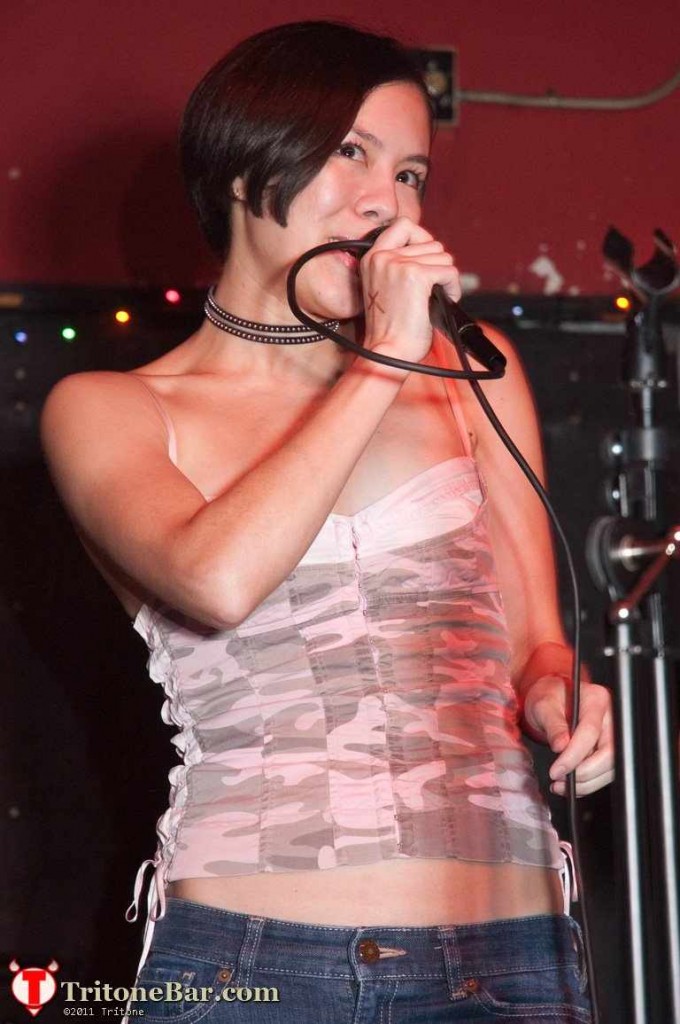 Elise rocking the mic at Sugartown (in one of her fav concert action shots) on June 25, 2011. Photo courtesy of Tritone.

I’ve now played a handful of festivals and sold-out shows, but I don’t have a lot of experience with converting a crowd – that moment where an unknown band turns the tide of chatter to become the focus of the room.

On Saturday I watched from my vantage point on the stage – and felt in my gut – as Filmstar did just that. We had the help of a handful of boosters in the crowd, but for a moment during our second song I could feel the attention of the room focus on us. Suddenly we weren’t playing to the sides and backs of heads – we were playing to ears and eyes.

Part of what’s awesome about Sugartown is how common that conversion can be. Sugartown is a monthly show featuring (really good) all female-fronted or majority-female bands.

If you know me well, you know I’m not usually into reverse discrimination programming, but Sugartown isn’t about excluding boys. It’s about creating a haven for fans of female rockers to find four new bands to love every month.

And, as we know, I’m a fan of female rockers. As are all of the other Sugartown attendees. Thus the frequent conversion, and typical friendly vibe.

E and I quickly made friends with the first band, Yumi Sekai. Lead singer Salena Kress said she had tried to start up a failed math rock act before settling on the Yumi Sekai sound, but I felt like I could still feel the lineage. YS was like mathless math rock – all the crazy instrumental breakdowns and killer riffs with none of the “we’re counting really hard now” compound changes and screwed-up faces. 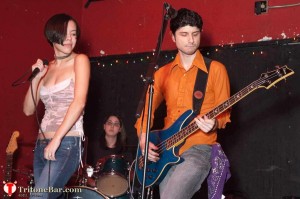 Salena and Jackie Wechsler trade lead guitar duties while Salena delivers intensely pretty vocals. Even when she rises up to her topmost rock belt she sounds less like a screaming rock banshee and more like a Disney princess out for revenge.

I mentioned that to her after the set, and she totally got it. “I like melodic music,” Salena told me, “it can rock, but the singing has to be good.”

If that sounds familiar, it’s because that’s my policy too. Needless to say, Salena and I hit it off. We did some booty-shaking together during the closing set from Girls Dresses as Girls.

It’s so different for me being a bassist instead of a band-leader. My job of holding down the low end and supporting the rhythm leaves me more open to experience what’s happening in the room. When a dance party sprung up during our set, I did what came naturally – I danced, kicked, smiled, and laughed.

It was a good night. 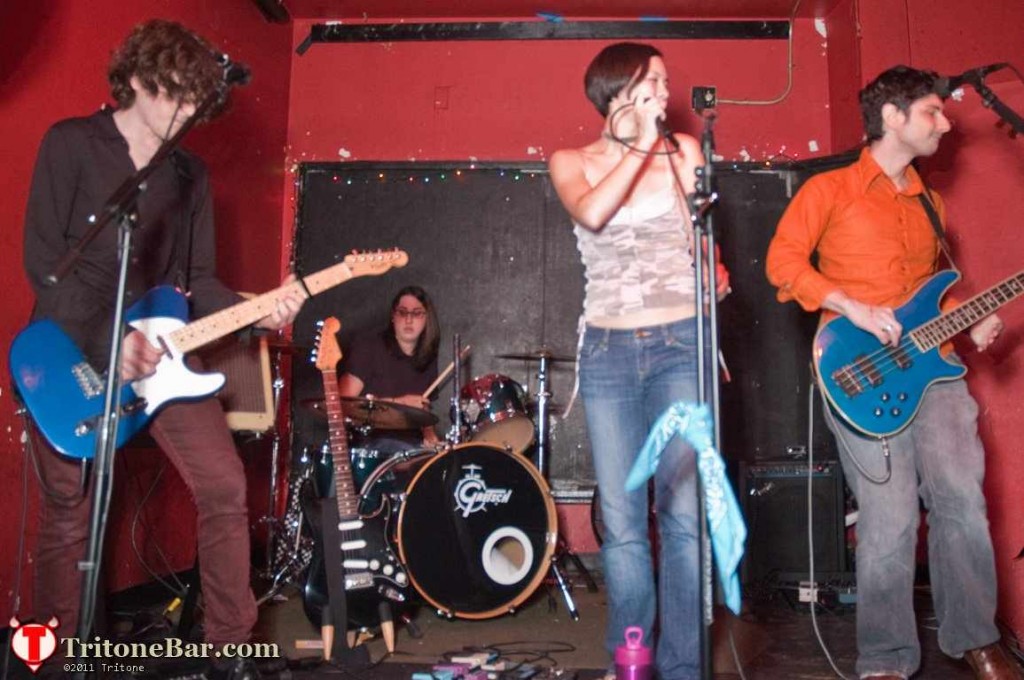 I know I look like the band nerd here, but in my defense, based on Glenn's capo position I think this might have been the exact moment the dance party began to break out. So I was probably using my measure of an open E-string as an opportunity to execute a killer dance move, which is hard to depict accurately in a photograph. Or, I am the band nerd. Photo courtesy of Tritone.

Previous Post: « How I Got My License AKA parallel parking is the mind-killer
Next Post: What I Tweeted, 2011-07-03 Edition »