You are here: Home / Creative / my music / arcati crisis / Arcati Crisis @ All Fired Up

Part of the fun of being in a small-time, mostly-acoustic, folk-tinged, dance-rock band is the unusual places we get to play.

I think Saturday’s gig at All Fired Up might be our new current title-holder. We were set up in the middle of a pottery shop, surrounded by shelves of plates, mugs, and the visages of Disney characters. On every side were arts and crafts tables filled with eager painters customizing their pieces.

All Fired Up is a paint-it-yourself pottery shop at 602 Haddon Ave in Collingswood, NJ 08108.

I can’t even think of a runner-up, really (Dorian’s Parlor doesn’t count, since we’d probably have been there anyway even if we weren’t playing).

Oh, and our first time playing a three hour gig in over a year.

Plenty for us to fuck up.

Except, Arcati Crisis has recently entered into a period of ineffable grace… or, at least, unfuck-upable zen. We played all three hours down to the minute, and we played them well. 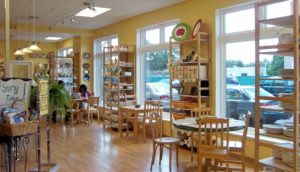 See that table in the foreground? Imagine that replaced by a hurricane force amount of acoustic rock.

Out of the gate, our “Dumbest Thing I Could Do” finally felt like a real acoustic dance song with Jake’s creeping arpeggiated scale bass line. We reinvented “Real End” yet again, debuting its new upbeat pop take engineered by our drummer Zina. We debuted our Rock Band 3 style “Space Oddity” with each of us singing a different part of the story, and ended on a rather triumphant duo take on “Total Eclipse of the Heart.” Afterwards we gave an impromptu encore supporting Jake when he medleyed into Weezer’s “Say It Ain’t So” from The Wood Brothers’ “Luckiest Man.”

The part I liked the best was our audience. Actually, the lack thereof. Unlike a bar or coffee shop, people don’t come to All Fired Up to spectate – they come to create! At no point were we playing to an attentive audience, because everyone was spread around the shop, busy decorating their various works of pottery.

I actually prefer a busy, captive audience to any other kind. It’s easier to convert strangers who are doing something they enjoy than to pit your sound against jaded ears at an open mic or who are waiting for the next band.

While I love getting our full-scale rock on at a big venue in Philly, I’ll be disappointed if our songs ever grow to the point that we can’t bring them to these unusual spaces.