This issue presents two things I have no small amount of 90s nostalgia for: Superboy and Scott Lobdell.

Superboy has been through several incarnations, but the one I’ve always enjoyed was the 90s Reign of Supermen version, which was essential an attempt to regrow Superman in a lab in case of catastrophe – or, you know, if they just needed a spare. The result was a James Dean version of Supes, complete with bad attitude and leather jacket.

Scott Lobdell inherited the crumpled mess of X-Men left behind by Chris Claremont and Jim Lee jumping ship from Marvel’s flagship book in quick succession. He not only straightened things out, but started a new era of X-mythology that actually fielded some decent mysteries until editorial interference strangled the life from his plots.

I don’t know that the two necessarily go together, but I’m fond of them both separately, so I don’t see why they shouldn’t combine for a likeable comic series. 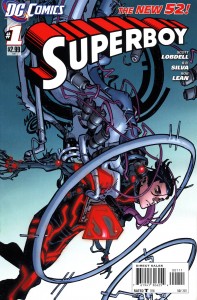 In a Line: “They call me Superboy. I have no idea why.”

Scott Lobdell effectively reestablishes Superboy’s origin and finds a spare set of heartstrings to pluck along the way. He hews close to the Reign of Supermen origin of Superboy, who is grown from a genetic sample of Superman in a tank (a la Neo, in a clear artistic homage to the Matrix).

Yet, Superboy isn’t a straight-forward clone of Superman, and he isn’t as plugged in as his keepers think. The result is that he is frequently the one conducting a social experiment on his confident captors. Despite his vast intelligence, he knows nothing of human companionship – even when he’s freed from his tank no one takes the time to address him directly. He is a thing, and maybe a weapon.

The interior art is an improvement over the awkward cover, but it’s not super. Faces have a certain handsome, rubbery sameness to them, like a set of fresh scrubbed Sims loaded up for a new game. Luckily, it’s only Superboy and his bespectacled red-headed keeper you have to recall (although silver-maned and morally ambiguous Rose may be more interesting than either).

The end result is a serviceable reintroduction that puts Superboy into place to either lead or battle the Teen Titans (I can’t tell which) in his first exposure to the outside world … which doesn’t seem so wise. Lobdell is an old pro at turning in these “get from point A to point B” stories, but I’d rather see him unleash the talky battles and constant dropping of hints I loved him for in the 90s on X-Men. Hopefully he has something less rote in store for upcoming issues.