You are here: Home / consume / Crushing On / #MusicMonday: “Drunk with the Thought of You” – Sheryl Crow 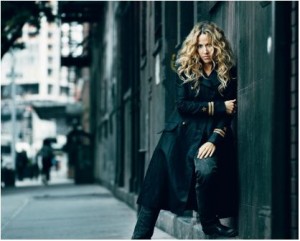 The mass music media seems to have lost the plot on covering Sheryl Crow after 2002’s sunny (if flimsy) C’Mon C’Mon failed to spawn the breakthrough singles of her previous efforts.

Pair that with a monster performances from her Kid Rock duet “Picture” and greatest hits (so far) cover of “The First Cut is the Deepest,” and I feel like everyone shut the book on Ms. Crow. “Yes, you are incredible singer, consistent songwriter, multi-instrumentalist, and multiple Grammy winner – but you have a Greatest Hits out, you’re getting older now, and the Lance Armstrong romance is getting a little dull. I think that means we’ll put you on the ‘Adult Contemporary / No Real Coverage or Radio Play’ shelf.”

Did Sheryl Crow help with Wildflower, a sleepy, almost-all ballads follow-up? Maybe, but for one of the few career solo females to emerge from 90s rock you’d think she’d get their benefit of the doubt with every album. Sadly, women in music have to stay hot and poppy to stay on the cover of magazines. Being a tremendous songwriter doesn’t cut it.

Things don’t work that way in my world – it takes a lot for me to unsubscribe from an artist who I adored for over a decade. That is how I discovered that her 2008 record, Detours, was one of her strongest efforts and includes a pair of her best songs of all time – “Drunk with the Thought of You” and “Love Is All There Is.”

And – how freaking cool is this – there is a “making of” webisode on YouTube for “Drunk”!

(Always nice to see that big, famous songwriters argue and stumble over the same sorts of things that Gina and I do :)

No matter the writing partner, Crow has maintained an earthy, 70s AM radio vibe across a career of strong songwriting. On “Drunk with the Thought of You” she transcends that to head right to the source, finding Beatles-esque perfection in marrying a unifying lyrical theme to a simple chord structure. I’d hold this song up alongside “You’ve Got to Hide Your Love Away.” It’s that good.

I find it hard to comprehend that a song this good will fade into obscurity as the B-side of a low-selling, mid-career LP. Every fan of good songwriting should know this song. I highly suggest that you drop $.99 on buying the album cut on iTunes or Amazon – and, remember, just because the media narrative on an artist has run dry doesn’t mean that they aren’t capable of producing the best work of their career.