On day 41 of EV6’s life there is only one thing, living or animate, that I am positively sure she can identify other than E or I. 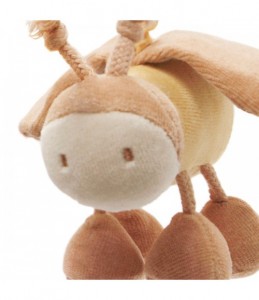 We received a small assortment of stuffed and noisemaking creatures from our friends and family. I wasn’t exactly sure what to do with them. Even a seemingly tiny bunny or caterpillar is about as big as a newborn baby, give or take. I assumed she would thing all of these grinning creatures were just wildlife showing her a threat display and she would constantly cry and try to army-crawl away from them.

Mr. Bee by miYim was different. He looks so darn friendly. He has a firm body and  exceedingly silly feet attached to his thorax with yarn legs. He has a small velcro cuff for affixing him to a car seat, stroller, or baby. And he makes an extremely pleasant dull jangle when he is shaken. It’s a very quiet, neutral sort of sound that I was willing to commit to hearing over and over again, if necessary.

I forget exactly where he started out, but I quickly migrated Mr. Bee to the changing table, because newborn babies have a complete meltdown every time you change them and I was desperate for anything to distract mine while I desperately wiped away her black tar poop.

I would jingle Mr. Bee once or twice, and then lay him on EV6’s chest or even cuff him to her wrist so she could keep on hearing the jingle while I changed her. Soon, I began announcing him. “It’s Mr. Bee,” I would exclaim, signaling that we were beginning a visit with her insect friend that just happened to coincide with a diaper change.

Eventually, the routine (which, keep in mind, happens 10-12 times a day) extended to include a little jingle to Mr. Bee’s jangle. I sing “Mr. Bee” three times in an ascending triad cued from his dull chiming, and then announce “It’s Mr. Bee!”

A little over a week ago we were having a gibbering freak out about EV6 smiling at us randomly while sitting on the couch. The next time I changed her and sang the Mr. Bee jingle, I noticed she smiled then, too! I was usually just so busy grabbing changing implements and psychologically preparing myself for runny mustard poop that I hadn’t noticed when she started doing it!

I asked E if she had noticed this, and she said she had never witnessed the phenomenon.

“Well, are you doing the routine?”

“No, you sort of have to announce him.”

“No, no, no,” I responded, and escorted her upstairs to the changing table to show her my specific Mr. Bee salutation.

As it turns out, my strategy worked entirely. EV6 has not cried during a diaper change for weeks as long as they are preceded by Mr. Bee. We have even extended his good will to a goodbye ceremony where he gives her a little bop on the nose and then flies back to the shelf.

As far as she is concerned, diaper changes are Mr. Bee Variety Showtime, a feature of which is one of the big humans doing a lot of wiping and patting of her behind.

(Epilogue: E tracked down the friend who bought Mr. Bee for us, and she said she purchased him at a Whole Foods because he made the least offensive noise of all the various baby toys. Also, his name is Bailey, he is $10, and we’ve already purchased a backup.)