You are here: Home / Personal / topics / essays / Are my eyeballs really only worth $4 to you?

Every since 2004 when we gave up live television and I purchased my first iPod I have been completely removed from the concept of advertising you are forced to consume. Sure, I still use the internet and read magazines, but the ads can be ignored or the page turned. I will never wait through a pre-roll ad to watch a video – I either give up, or silence it and come back a minute later. Every time some great new streaming service pops up and it has ads, I skip it. If I’m going to consume advertising it will be by choice, and I’ll stop when I feel like it.

My one weak spot is Hulu. Hulu saves me from needing live TV, but it comes with the necessary evil of a handful of commercials. During the regular TV season, we typically have a scant 2-3 shows we keep up on each week, but that exposes us to 10-20 minutes of commercials. That’s not to mention season-long binges of their Drag Race archive.

At first I thought my armor was unbreakable – after a decade going without, they would just bounce off of me brain ineffectually. Plus, I had spent a lot of that time being a marketer, so now I can dissect a message easily. They’d have no effect on me.

I was a little bit right for a little while, but then I noticed they were starting to wear me down. Despite picking apart each ad spot, I actually found myself having opinions about car brands and laundry detergents! It heavily disincentivized me from using our Hulu subscription, even if it meant paying three times as much to watch the same show ad-free on Amazon or iTunes.

Then, earlier today, I saw this:

Introducing #hulu‘s new commercial-free option. Limited Commercials or No Commercials… It’s up to you. https://t.co/KNzleEhx0I

I immediately steered my browser to Hulu and steeled myself for the potential charge. I figured the cost of renting my eyeballs for 10-20 minutes a week plus binges would be high, but I told myself it would be worth it to free myself from the yoke of forced advertising.

It turned out we were talking about a difference of four dollars. I was so livid I stopped dead in the middle of updating my subscription. All of that time sending advertising across my eyeballs and into my brain, time I’d rather spend watching another episode or writing or sleeping, was only worth four fucking dollars. For a mere $36 a year I could have stayed ad-free – that’s a week of cheap lunch in Center City! Of course I would pay that!

It was one of those moments where I really considered the massive capitalist machine in which we are all mere cogs with no say in our fates. If it only cost $4 to escape ads on Hulu – a rare network that can quantify its exact amount of impressions and demographics, how cheap might it be to get away from them elsewhere? How much could I pay to live my life completely free of the spectre of advertising in a CPC environment where I’ve already proven myself to be a non-clicker, like on YouTube, Facebook, or Google? How much to get an ad-free version of Rolling Stone or ride on a bus with no advertising? I suddenly have the feeling that for all of this passive junk my eyes and ears are bombarded with I could just empty my change jar and make it all go away.

(It reminds me of early in the life of CK when Blogger was free and always broken, and I would send screeds across the internet to Ev begging to pay him anything it would take to get just slightly better service.)

You might say, “You’re crazy! You’re privileged! You’re volunteering to give your money away!” But, let me ask you something – what is crazier? Paying the actual cost of a thing I want to consume and then consuming it, or constantly having my content diluted and my time wasted in exchange for spending nominally less money? Say, four dollars. Which in turn reminds me of this crude comic, which speaks an ultimate amount of truth to all of these things we think we get “for free.” 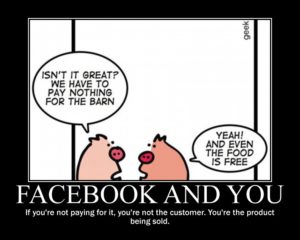 I refer to this constantly at work. Constantly.

If you’re willing to give all that control away for $4, I hope you spend it on something you really need.

Me? I updated my subscription.