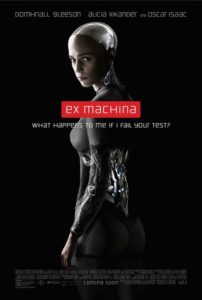 E and I haven’t watched a new movie in a month or more between busy-ness and trying to maintain our new midweek no-screen night policy. Tonight we were excited to relax and watch a new arrival from Netflix. We picked Ex Machina.

I don’t know if I can name any other movie that has made me as angry. At least, not this year. I fundamentally disliked other recent critical darlings like the stupefying Snowpiercer and the ludicrous Gone Girl. In the same vein, Her was terrifically average. In all three cases I left with something to discuss rather than just wasted time and a void of seething rage.

I’m not sure if the rage is due to me finding the movie so awful and downright problematic, or because I discovered that it ranked anywhere from 70-93% approval on critic aggregators. Critics are supposed to dissect this nonsense, not endorse it.

Here I am to dissect it for you. There might be spoilers from here on out, because I really am hoping you’re not going to watch it.

The basic premise is that a reclusive Steve Jobs type of character (the Creator) plucks one lucky winner (the Tester) from his company to visit him in his isolated R&D living space, where he is single-handedly developing and constructing an AI. The lucky winner will conduct a week-long Turing Test to evaluate the success of the current model for reasons that are unclear.

Its an interesting premise if there is somewhere to take it. Will the AI adapt? How does the Creator feel about his creation? Will it make the Tester question his humanity?

Ex Machina feints in all of those directions but mostly stands in one place. The AI doesn’t adapt – in fact, it behaves exactly as the creator expects, every time. The Creator is a one-note always-right asshole from an actor delivering all the nuance of a cinderblock, so there goes the question of his feelings and any satisfaction you might derive from the answer to the first question. And, what could have been a terrific plunge into existential terror for the Tester is addressed by a brief attempted suicide montage that apparently resolves all of his concerns and then we don’t have to keep worrying about it.

If that was all that was wrong with the movie, we could simple call it weak and leave it at that. There is so much more.

First, the movie nails its achievement in CG and production design, but other areas of technical performance are a flatline. The sound design is awful. It wants to be both aspirational and claustrophobic, but it’s just bland and buzzy. The cinematography had consistent problems. There were some weird framing and focus-pulling choices early on that I thought were deliberate, but as they continued through the movie I decided that, no, they were just inept.

However, the biggest technical flub is the acting. It was terrible. The Creator was in mustache-twirling mode the entire movie. I suppose that’s largely the fault of the script, but I still believe there could have been sort of motivation within the asshole rather than playing him like a SNL caricature of the worst boss ever. The AI actress was mushy at best, trying to sketch an arc from stoic machine to perky robot to steely automaton but mostly just mumbling and staring with sleepy intensity. The Tester is a relatively charming actor (Bill Weasley, actually), but he didn’t create much emotional life for his character. When he confesses that his parents died and that’s why he learned to code, the scene is so flat and unaffecting that it could have been cut if it wasn’t part of the awful punchline that tries to gotcha in the final scenes.

Which brings us to the script and all of its many faults. It starts with the terrible, stilted exchange between Creator and Tester when the latter first arrives. It’s like writer/director Alex Garland has only ever read about people speaking to each other and never witnessed it for real. (See what I did there? No? Good, that means you haven’t watched the movie.) This disconnect meant every scene between the two men felt like it might finally be the revelatory one where they cut through their awkwardness but, no, the awkwardness was the script, not the relationship. Even when they have their reckoning and we should have felt something between them, it’s still as stilted as ever.

Then, there is the first Turing Test session. It’s a bust. That the Tester didn’t walk out and just say to the Creator, “Sorry, dude, back to the drawing board!” was super-puzzling. Later, the script tries to make some sort of point of this by having the AI ask the same questions of the Tester to watch him stammer through the answers. It was clumsy and self-correcting as if the prior exchange was already committed to film – like a TV show that is trying to retcon an earlier blunder.

It is so attractive to think of the Tester as a potential machine because the script is so bad. If his fumbling suicide attempt had actually taken the movie in that direction, we’d say, “Oh, that’s why!” about the beginning of it and forgive it for Shyamalan reasons. As for why the Tester develops a crush on the AI and then needs to help her escape purely for ethical reasons, that all happens just because it has to happen and because he’s a “good person” and the AI is sure he’s not lying about that. There’s no real reason for any of it. His speech that more or less introduces the Cave Allegory to the AI (who should know about it, she is built on a search engine) goes toward explaining his actions, but all of his reasons are told and not shown.

Now we’re in the middle of a movie with three characters it’s impossible to care about, except for the tiny inkling that the Tester may actually be the AI and that’s what we’re testing here. Ah, but there is a fourth character – a subservient (of course) house-maid and (of course) sex slave who is an Asian female (of course), who is a little clumsy except when she is doing sweet 70s dance choreography or lounging around with her breasts out, as she is wont to do.

Here’s the thing, shitty filmmakers: You can make the argument that the particular awful Creator character would choose to both idealize and abuse a woman of Asian looks (not descent, mind you, as she’s descended from a can-opener), but if you’re NOT going to build that profile into your character then what you’re achieving on screen is just sexist, misogynist, racist crap. The Creator has contempt for everyone, but never once does that come out in him being sexist or racist – which means the hangup is the filmmaker’s, not the character’s.

Oh, and don’t think it escaped me that the one AI model we see footage of the Creator dragging around like an inanimate object just happened to be skinned as a black woman. Total coincidence, right? The first model is nude and blonde with just a polite touch of pubic hair, and we never see her harmed or retired. Then, a Black model never gets a face and just happens to need to be dragged around limply as though she had been beaten to death. A subsequent Asian model with slightly harder features is also defiant but she is kept at a distance and destroys herself in the process. Then the idealized Asian model with delicate features was subservient and perfect in actions – but not in intellect! Back to the white girl drawing board!

We learn about this in a single stomach-churning montage (but, don’t worry – these are objects, not women!) that cuts directly to the subservient Asian model in a sexual pose. We get to ogle the obsolete women’s fully-nude full-length bodies repeatedly for the rest of the film – because of course they still have their full skin and carefully threaded pubic hair and carefully sculpted pubis mounds as they are kept in their closets, and of course the camera must linger on these details carefully. Never you mind that the Creator explains that the brains are really the only thing he is significantly tweaking between models. He’s definitely going to vary the body types and races because, you know, reasons.

Here’s an astounding question – why did any of these models have skin on them enough to show their bare breasts to begin with if they were such early versions? Our main AI character is in a sleek carbon-fiber body that she eventually wraps flesh around, but it’s a massive plot point that she has very little skin. Yes, that’s partially because she’s a bit of a decoy, and the point is to see if the Tester can get past her semi-human appearance (and the human part is specifically modeled on faces he’d react to). However, why did previous models have skin at all? What were they of a race, if not just exploitation and as objects to express violence against? Why were their races varied at all? Why weren’t they colored blue or green?

Here’s the honest answer: Because there is nothing smart or challenging about Ex Machina. It’s main attribute is that it is a white male power fantasy about white men having power over each other and everything else in the world. The AI doesn’t win, as the movie manipulates us to try to feel in its final shots. Really, each of the men won and so also lost, and as a fringe benefit a woman created like Eve from a rib got to enjoy the spoils of their victories by continuing to act out the programming given to her by her Creator – because man always gets his way in the end.

There are myriad ways this movie could have been a thought-provoking success even with its one-note script. A gender or race swap of any character would have made it more interesting even with all the same words because the power dynamics would have changed. Leaving the Tester being AI more open-ended or handling it with more care would have been interesting. The Creator actually having any emotions at all could have helped – you don’t even get the sense he’s very invested in the outcome of his success.

Even without any of that, this movie could have been an enjoyable if it didn’t wear its utter malice towards women of color on its sleeve. Want to see a truly disturbing movie about two people locked in a house and manipulating each other? Try Hard Candy.