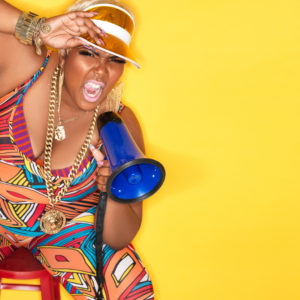 In a major shock, Sleater-Kinney reassembled in 2014 and released a new album in January 2015.

This is not a post about Sleater-Kinney. It could not exist without them, though.

Being a massive, massive Sleater-Kinney fan and working with another one, I decided we absolutely must see their show despite it being sold out. I procured a pair of tickets, and David and I found our way to my favorite spot in just about any venue – the back left corner of the soundboard.

(Totally by coincidence, both my friend Jenn from high school and CK hall-of-famer Aim were standing within ten feet of us. People with good taste in music always stand behind the soundboard.)

I had never heard of the opening act, Lizzo, and hadn’t bothered to look into her much further past divining she was some form of rap artist. I thought: Good for SK for bringing something different on tour with them, I thought.

My body was not ready. Nothing about me was ready. Lizzo’s set was one of those soul-devouring sets you get lucky to see from time to time, where you don’t know one note of a performer’s music and it doesn’t matter a damn bit because they come out on stage and swallow the audience whole.

I have never danced so hard at a concert. I have never heard anyone so effortless swing from an emcee flow and dance moves to ridiculously amazing vocals. Like, diva-level vocals. I could not believe they were even happening, on top of recorded tracks, a DJ slash emcee, and an incredible live drummer.

As soon as Lizzo left the stage and the lights came up, I SPRINTED into the lobby to buy a copy of her CD. It was in rotation in the car for a little while and it featured a ton of the songs from her set, but they mostly just didn’t PUNCH like she did live. They had the same beats and samples, but not the same raucous energy. They had the same explosive vocals, but without the visual of Lizzo cutting back and forth from rapping to belting.

I’d straight-up pay $100 just to see another Lizzo set, so when she released another album – for free! – in December 2015 I was all over it. “Ain’t I” is the first track from Big Grrrl Small World.

This feels a lot more like her set to me than the material on her first LP. It’s a little less festooned with stuff – the entire first verse is only drums and a fuzzy two note bass, but it’s still head-noddingly catchy. If this comes on while I’m driving I reflexively reach over to crank the volume.

I love how the second verse escalates from the hip hop self-reference (Eris is her emcee) of the first into a brief history lesson, pausing for a second to stutter against the song’s rhythm in one of the catchiest scream-a-long bits (“hangry, feeling soupy”). I get a chill every time she transitions from the great hook of “Henry Ford without the cars” into the next sequence; it’s great songwriting.

Looking at the back of Sophia Eris’s head
Eating a sammich (but we don’t got bread!)
Got a spider ass bite on my head, hangry
Feeling soupy, I brought my fuck in, yo I’m duckin’
Donald, Daffy, Howards, them cowards
Could never throw shots at a super with power
What was Russia without the czars?
What was Henry Ford without the cars?
My grandparents worked at Ford factory
So Henry is nothing without my family tree
And his slave-owning family needed Black blood still
So I think we need a spot up on Henry’s will
That would never be the case, in case you ain’t keeping up
I’m dishing out cases of that heavy bass
And them bassheads straight from the oppressor’s loins
Are giving us our “Free us!” in hella coin

Then, in the kind of hair-pin turn that left me gaga at the show, the song slams on the breaks for an intimate jazz band bridge, with Lizzo crooning at the front of a girl-group quartet and a tiny backing band that could be played straight off an old vinyl. It sounds disconnected from the rest of the song, but the lyrics call back to that second verse:

In the first verse, Lizzo says, “I make that crack music, n—, that real black music” (which, thanks to Genius, I know to be a reference to a Kanye West song). The first time I heard the lyric, for a moment little white me was like, “Black music?” I didn’t understand how to parse it for a while.

A read on the lyric might be that “Black music” references the well of influences this song draws from, all originated by blacks. It could be that its a message encoded in such a way that it will be more resonant for listeners with black heritages. Or, maybe it is that Lizzo’s music is inherently “Black music” despite its genre-bending because it comes from her identity.

Or maybe I’m wrong on all those fronts. That’s kind of the point. She didn’t make the track to open my eyes or change my point of view. She made it to make it, and to say it. I might love the words, but it’s not for me to sing along to. While I can have my own personal interpretation, it doesn’t exist for me to fully understand and dissect.

She played this tune live on Colbert’s Late Show in December in a version that plays up the jazzy keys a little earlier in the song. While this isn’t quite as explosive as she was when I saw her in 2015, it should help you appreciate what I’m seeing in my mind while I listen.

Previous Post: « Who you gonna call? Not the plumber.
Next Post: Review: Paper Girls, Vol. 1 by Vaughan & Chiang »