You are here: Home / consume / comic books / What is “Internet Scarce” and why should you care? 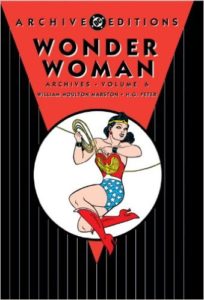 Of all of the massive Marvel Omnibuses I own, this slim Golden Age Wonder Woman Archive Edition Vol. 06 is my record-holder for most expensive single collected edition purchase. I’m sure there are some copies sitting forgotten on shelves all across America.

Have you ever hunted down a rare thing online and paid a little bit more than you intended to spend? Me too. While some of those things are legitimately hard to find, it’s just as likely we’re fallen prey to the phenomenon of “internet scarcity.”

To explain that, first we need to spend a little time in the real world.

Yesterday EV and I were at the home improvement store (yes, again), and one of our objectives for the trip was to pick up some drain declogger. As I surveyed the shelf of options, I found myself thinking, “Why are we even shopping for this in a store? Shouldn’t I be comparing brand reviews on Amazon? I bet I could get this cheaper if I ordered a bulk pack!”

Even if you aren’t as hard core as I am about avoiding physical purchases, online comparison shopping for reviews and deals has became a standard part of the buying experience the same way checking the Sunday paper for sales and coupons before heading to the store was when I grew up. What we’re seeing in the store is never the full story – we could be a quick check of the phone away from a bigger discount!

However, in my experience we don’t usually think in the opposite direction. When it comes to buying things online – especially collectors items that may be rare – we never consider the market may be different in the real world.

Why should we? When we buy a rare book on the internet the entire web is at our disposal to check for prices. We’ve already checked Amazon and eBay and Google Shopping and even Alibris and Biblio. We know that $90 is the least we can pay for this $30 cover price book that started out on sale for $15, and goshdarnit, we’re taking the plunge!

My many colleagues in collecting comics via graphic novels have a term for this phenomenon: “internet scarcity.”

The online market for your favorite collectible is a supply-and-demand system full of context that’s visible to every collector on the planet. It’s great for torpedoing unwarranted markups of common items and equaling out supply and demand across different geographic areas.

Yet, once the item you want becomes even the slightest bit less supplied than demanded, it’s guaranteed that prices will go up. 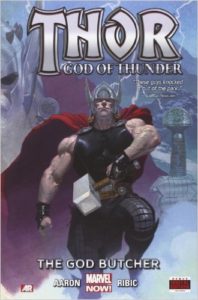 This outstanding Thor collected edition briefly got absurdly internet rare in 2014, leaping to over 250% its cover price despite a massive printing with hardcovers still on shelves all over the country. As soon as a oversized hardcover was announced, suddenly copies flooded the Marvel. You can currently grab a copy for less than 25% of the cover price.

I’m not here to give you an economics lesson. Heck, there doesn’t even have to be demand! Sellers who discover they have a relatively unsupplied item will start the price high just to see if anyone will bite. The fewer of the item, the higher the price. Eventually, someone desperate for it will show up with money to burn. Suddenly, a precedent is set – and, like our war with Eastasia, now that book has always been $200!

(That was a 1984 reference, by the way – we’re not actually at war with Eastasia because it’s not an actual place with which we can be at war.)

Internet scarcity does not always indicate real world scarcity – and, even if it does, it doesn’t mean the price points will be aligned in both markets. There’s a social proof component to paying internet scarce prices – you can see people have paid them before. No such precedent is available in a physical store or even on Craigslist, so your skepticism takes over – just like mine did with the drain decloggers.

As an example: Marvel Masterworks are premium format hardcover reprints of Silver Age material by Marvel printed in relatively short supply – sometimes less than a 2,000 initial print run for a $75 book that will never be reprinted. Once the books are gone at the distributor level, fans freak out, and the books tend to make an automatic leap to $125 or higher.

Yet, these books are well known to linger on the shelves of comic shops for exactly the reason internet collectors covet them – they’re one in a series of high-dollar items with small print runs spread across many years, which makes it difficult to own entire series of them. They’re not impulse buys for the casual fan. By picking them up over cover price online, we’re simply fortifying their internet scarcity.

This doesn’t just apply to comic books. Many of us are guilty of succumbing to the cult of Amazon, where we’ll drop anything into our cart if it’s PRIME. After doing that few times doing it with my favorite lip balm I checked its price in the local drug store – it was cheaper than Amazon.

What’s the solution to overpaying for the the things we want online? We internet shoppers need must occasionally pick up the dreaded phone and call or – Bowie help us – visit these forsaken physical locations to avoid paying a hefty premium for our convenience.