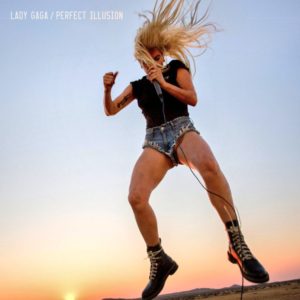 Considering I just wrote about this song six weeks ago and in doing so deconstructed it considerably, what else is there to say?

The choice of “Perfect Illusion” as a lead single turned out to be less a canary in a coal mine and more a Trojan Horse. It is by far the most synthy, thrashing, disco-tinged tune on the entire record. Only yesterday’s “Dancin’ In Circles” comes anywhere near it in sound and the chorus of “Diamond Heart” in ferocity.

That begs the question for me – was this a obligation single? You know the kind that I mean. That one song the artist begrudgingly produces to sound a lot like their older work so that their record makes an initial impact on radio, but then quickly ditches and never references again.

We’ll never know Lady Gaga’s true intent. One signal that “Perfect Illusion” was a throwaway is that Gaga hasn’t been performing it visibly past a single pub warmup gig in the UK. It played but not published for her Bud Light sessions on YouTube, not on her release-day Facebook Live concert, and not on Saturday Night Live this weekend. The only full-quality performance we’ve seen is a stripped down version that would have fit in with the ballads on this disc.

Is that in response to tepid radio pickup of the tune, or was it always going to be this way?  I’m not sure, and we won’t have more of an indication until we see if it shows up in tour setlists.

What we do have is its context on the record. “Perfect Illusion” acts as a crescendo to the build of energy throughout the first half of this album. The back half is a much more subtle affair. When the vinyl of this record drops I would be surprised if it wasn’t the final song on Side A rather than the start of side B.

There’s also the thematic content of the album to consider. As a lead-off single, “Perfect Illusion” seemed like a standard kiss-off to a past lover – an easy inspiration to assess considering Gaga’s recently-ended engagement. Instead, try reading it as a song that’s about making Artpop.

My guessing game is strong
Way too real to be wrong
Caught up in your show
Yeah, at least now I know

Gaga fired her longtime manager Troy Carter simultaneous to Artpop‘s 2013 release, when media attention and fan expectations were at their peak. She had promised for months to deliver a stunning work of artistic perfect on par with her highly-regarded Fame Monster EP, but Artpop turned out to be a mirage of synthesizers and drum programming more about The Fame that Gaga had been chasing than about the woman herself. Most critics and fans brushed it off like a gossamer soap bubble. She was truly caught up in her own show on “Applause” and flop “Venus,” which was scrapped for middling performer “Do What U Want.”

Would it have been better off more undressed, with a plainer, Gaga at its center? Did she let producers, managers, and A&R reps second guess her own direction – or perhaps did she second guess herself? Maybe she wasn’t as obsessed or inspired by all of those layers of fabrication as she claimed she was. Maybe it wasn’t love – not for her, or for her fans. It’s evident that the world loves a less-guarded, still-unique Gaga based on the success of her intervening work like Cheek to Cheek, American Horror Story, and “Til It Happens To You.”

In that interpretation, maybe “Perfect Illusion” was the only possible lead single to Joanne – a callback to a less-fussy sound that lays bare all of Gaga’s pent up anxieties about exposing something a little more stripped down and true on this record.

Or maybe that’s all just useless speculation about an inscrutable pop star who is smart enough that she can make us assume anything she wants to about her true motivations.

Either way, the vital, live-rock sound of the song is already aging well even if the brevity of its actual content continues to dissuade repeat listens. It turns out that Joanne would have plenty of live-band sound to share with us, but just not in the same vein as this tune.