Much of Paula Abdul’s debut Forever Your Girl is a cotton candy assemblage – whatever sugar they could spin around an inexperienced singer with an approximate relationship with singing in tune.

Don’t get me wrong – I love Forever Your Girl. I know every word on it. But, if you held it up to today it would be less Arianna Grande and more … I don’t know, who is a fake famous person who put out a record to maintain the illusion of their popularity? Julianne Hough? I’m not down with all the artists that kids like these days.

That’s besides the point. The point is that on this album filled with conventional spun sugar sounds (like title track “Forever Your Girl”) there are two singular, break-out moments that no one other than Paula Abdul managed to record.

One is the stark, funky “Straight Up.” The other is “Cold Hearted,” or as people more commonly know it, “Cold-Hearted Snake.”

Listen carefully to the sounds in the intro. It combines the same synth bass as “Straight Up,” the same 2s-and-4s snare hits, paired with with whining guitar bends not too different from the infamous wah on that song. What mades “Cold Hearted” stand out is the frantically sawing sampled string section that is subtly doubled by computerized blips.

When the intro chorus hits the song would be nearly identical to “Straight Up” if not for those strings, which stop their sawing to carry a counter-melody that makes Abdul’s clipped, staccato phrases form a single legato melody. 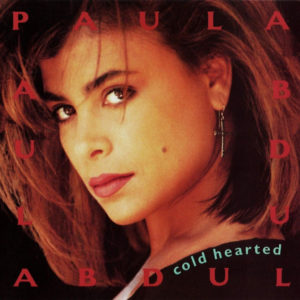 That’s it, really. Otherwise it’s just “Straight Up, Part 2: Faster and About Someone Else’s Lover.”

Were the strings alone enough to turn this into the massively memorable hit it became? Probably not. I tend to think it had a little something to do with the video – released almost a year after the LP originally dropped.

I was eight years old when that video hit. I wasn’t the kind of little boy who thought girls were gross – I was deeply in love with a girl in my class. I always wasn’t the kind of boy with prurient interest in scantily clad women – maybe because I was being raised by a cadre of women myself.

So please understand when I tell you that, even as an eight-year-old, I knew this video was heart-poundingly sexy.

Honestly, I think it kind of defined sexy for me. The moment that sticks in my mind is from the four-minute-mark, the image of the throbbing mass of limbs expanding and contracting around Abdul.

(Also, it was directed by David Fincher, who would go on to direct the video for “Vogue,” and later the films Se7en, The Game, Panic Room, Benjamin Button, and so on.)

Between the special alchemy of the song and the sexed up video, “Cold Hearted” was a memorable track that dominated my eight-year-old life. It seems like it’s slightly faded in the eyes of pop culture in favor of “Straight Up” and the whimsical “Opposites Attract,” but it remains among my favorite Paula Abdul songs.