You are here: Home / consume / comic books / New Collecting Guide: Magneto (plus: a list of his key appearances!)

I’ve long said that of all the Marvel characters who never had their own title (well, until 2014), Magneto’s arc is one of the most consistent and fascinating. 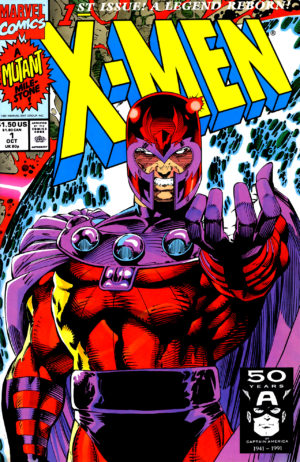 Stan Lee and Roy Thomas had established the allegory of Xavier’s closed hand approach to leading mutants versus Magneto’s closed fist long before Chris Claremont first penned the character in 1975. Magneto transform from a one-note villain in X-Men #1 in 1963 to a man blinded by the frenzy of needing to defend his own people by either establishing a sovereign nation for them or bending the entire world to his will.

Chris Claremont made Magneto’s seemingly Sisyphean struggle resonate more deeply when he began to gradually reveal that Magneto was the survivor of Auschwitz concentration camp in Nazi Germany in a series of references and flashbacks starting in Uncanny X-Men #150 in September of 1981. Suddenly, his fervor over leading mutant-kind was contextualized, though it still could not excuse his acts of violence (as in the same issue, when he drowns an entire Russian submarine full of sailors). His repeated attempts to carve out a sovereign, defensible homeland for mutants were suddenly and tragically recast as a way of recreating Israel prior to the World War II rather than after.

Marvel really loves to say that each of their annual events “will change everything,” but the original Secret Wars did just that for Magneto in 1984. By grouping him with the heroes in the outset of the story, The Beyonder (and, by extension, his author and editor-in-chief Jim Shooter) recognized the layer of nobility that Claremont had so deftly played up in Magneto’s previous appearance.

In turn, that cleared the path for Claremont to begin Magneto’s rehabilitation as soon as he returned from the company’s first line-wide event. He placed Magneto into a sympathetic position, shipwrecked and under the care of Lee Forrester on his own former island base, and then had Xavier personally commission him as the leader of the X-Men in the run-up to Secret Wars II in 1985.

That flawed nobility has never since left the character. Even through several later returns to villainy, Magneto’s focus is never pure evil (or, if in hindsight it seems to be, it’s quickly retconned away). That’s partly due to his relative scarcity through 2010. After “Acts of Vengeance” in 1989-1990, Magneto rarely appeared outside of X-books, and was always promptly mothballed upon his exit – as in his memorable turn in Claremont and Jim Lee’s X-Men, Vol. 2 #1-3 in 1991.

In a March 1999, Alan Davis and Fabian Nicieza finally granted Magneto his wish, with him assuming rule over the island of Genosha off the Southeastern African coast. As with the unending holy war between Palestine and Israel, Magneto’s Genosha was built atop the ruins of a country known not only for discrimination against mutants, but for pressing them into slavery and genetic mutilation. 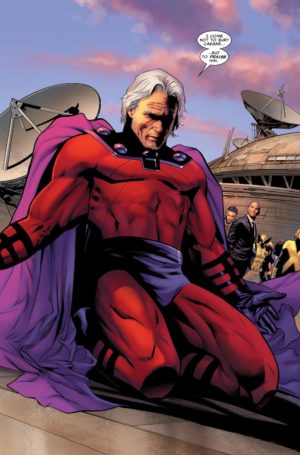 It seems that the land is cursed with ill intent, and Magneto couldn’t escape that when a super-sentinel cuts him and his millions of subjects down in cold blood in the shocking opening scenes of Grant Morrison’s New X-Men. Yet, Claremont would find a way to cheat that death (after all, it’s his speciality) in a 2004 iteration of Excalibur, using Magneto as leverage to kick off the House of M event.

The wake of House of M left Magneto without powers or purpose, given than less than 200 mutants remained on the Earth. It was Ed Brubaker and Matt Fraction – hot off their co-authored run on Immortal Iron Fist in 2008 – who set Magneto on a new path that culminated in his becoming one of the anchors of the X-Men books from 2010 to the present day.

Fraction’s run on Uncanny X-Men saw Magneto reclaim his powers and then submit himself to the service of Cyclops, who had been pressed into leading the entire mutant race past its potential extinction due to the events of Messiah Complex.

Kieron Gillen and then Brian Bendis loved the subtext of Magneto’s inability to simply play the right hand man, but it was Cullen Bunn who seized upon it in his unexpectedly riveting Magneto solo series in 2014. There, in the vacuum of positive or negative leadership of the mutant race, Magneto began to silence or subvert elements he found unacceptable all while undermining Cyclops as a revolutionary leader through being a triple-agent with SHIELD.

The arc of Magneto’s ascendence was so strong that after the line-wide reset of Secret Wars, it was Bunn who was tasked with writing the always-popular flagship of Uncanny X-Men – with Magneto at the helm.

That’s a lot of story over the course of over fifty years of Magneto’s publishing life. The Magneto Guide walks you through every issue in reading order, often proving context and major story beats to help orient you to each tale.

That adds up to hundreds of comics from dozens of different titles. What if you’re not interested in all of that, but just in the spine of the story I’ve described in this post? Don’t worry – I’ve got you covered…

I’ve boiled down Magneto to his most important and interesting appearances. Use this list to start your collection, fill in some blanks, or just guide your reading on an online app like Comixology or Marvel Unlimited.