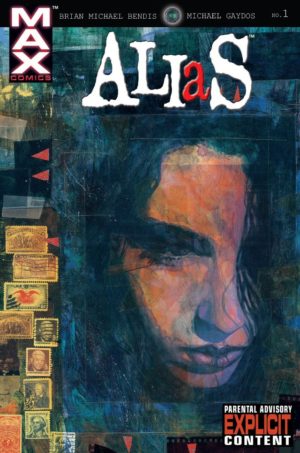 This new guide goes beyond listing the collections that include Jessica Jones’s major appearances. It’s a reading order for every issue she’s ever appeared and recaps the action from her guest appearances so you can follow her complete story from Alias to today without reading dozens of comic books.

In fact, if you loved Jessica Jones on Netflix, you can get nearly her complete Marvel appearances on your bookshelf in just 10 books! More on that below.

Jessica Jones is a modern Marvel success story – a character launched in an anything goes, adults-only comic in 2001 when Marvel was crawling out of their bankruptcy years who stuck around and is now at the forefront of their Netflix television offerings and back with a new solo series this month.

And, like a massive amount of Marvel’s 2000s successes, it’s all because of Brian Bendis.

Brian Bendis invented Jessica Jones from the spaces between superhero stories. It imagined what happened to the heroes who weren’t quite heroic enough, and dropped out of the business. What would these more marginally-powered people do for a living? And what would they do when their paths occasionally crossed with the more heroic.

There were so many connections to the history of the Marvel Universe in Jessica Jones’s original series, Alias, that when I read it for the first time a few years ago it sent me digging through my back issues.

Had there really been a hero called Jewel who was briefly in The Avengers? Was Jones née Campbell really a classmate of Peter Parker’s in early Spider-Man stories? Was she really Ms. Marvel’s best friend? 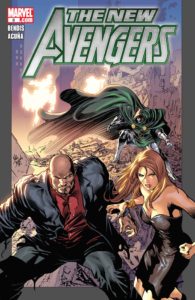 While the official answer is “no,” Bendis definitely did his homework in finding moments that could suggest that Jessica existed in the past. He also lent more credence to his creation by combined her with actual marginal heroes like Luke Cage and Spider-Woman, who hadn’t been put to good use for a few years and made perfect sense kicking around beneath notice with Jessica Jones.

(Yes, we also probably wouldn’t have Luke Cage on Netflix without Bendis’s influence. Little did we know he had them both earmarked for his future run on Avengers. It’s wild to think about it!)

Jessica Jones’s Netflix series picks up some plot points verbatim from Alias, but by fast forwarding to a confrontation with Purple Man it skips letting Jessica live with all the character flaws Killgrave left in his wake. Alias plays these beats for two years of single issues. Jessica is depressed and without direction, a hard-drinking nymphomaniac who can’t quite hide how much she cares about others even as she is bent on self-destruction.

It’s hard to say where the show will go without the specter of Killgrave haunting Jessica’s every move the way it did in the comic. That’s not only because it can’t crib as directly from Alias, but because after Jessica Jones transforms into a do-gooding, domestic figure who is often played shrilly against Luke Cage for easy laughs by Bendis in his run on New Avengers.

2017 will be an interesting year for Jessica Jones. Will a new Jessica Jones solo series recapture Alias’s magic? Will her TV show find interesting material having already burned through her single defining story?

I can’t wait to find out. In the meantime, you can catch up on everything that came before with The Definitive Guide to Jessica Jones. Or, if you’re newer to Jessica Jones in a comic form, you can capture all of her significant issues in just 10 easy-to-find volumes. 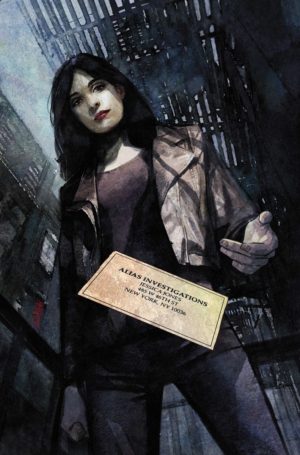 Young Avengers, Vol. 1: Sidekicks – This collects Young Avengers #1-6, in which Jessica Jones is a featured character in her first extended straight-up superhero adventure. This happens during the early part of her series The Pulse. This is a slightly older collection – the same material is also recollected next month in Young Avengers by Allen Heinberg and Jim Cheung: The Complete Collection (contains #1-12 & Special, the latter of which is a JJ story).

Jessica Jones – The Pulse: Complete Collection – The Pulse was a more mainstream continuation of Alias. This collects Pulse #1-9 & 11-14 (#10 was part of House of M and not a part of JJ’s continuing story) and New Avengers Annual 1, which works as a direct epilogue to this series.

New Avengers, Vol. 12: Powerloss – This collects New Avengers (2005) #55-60, which includes a story explaining just how far both Jessica and Luke are willing to go for the safety of their family. Available in hardcover (ISBN 0785145753).

New Avengers, Vol. 1 – In the second volume of New Avengers Luke Cage leads the team, having bought the Avengers Mansion from Captain America for $1. With Luke and his street-level team comes a more-active, more-confident Jessica Jones. This arc is the first time she ever really mixes it up with other characters as a full-fledged super-hero, and it’s a lot of fun.  Available in hardcover (ISBN 0785148728)

Already burned through all of those books? Time to pre-order Jessica Jones Vol. 1: Uncaged, the first edition of her new series, which is due in May of 2017!