For a number of arcane reasons, it’s hard to say, “These are the new comic collections out this week!”

Out where? Mass market booksellers like shops and Amazon get comic collections at a different time than comic stores do, and that lag differs from publisher to publisher. 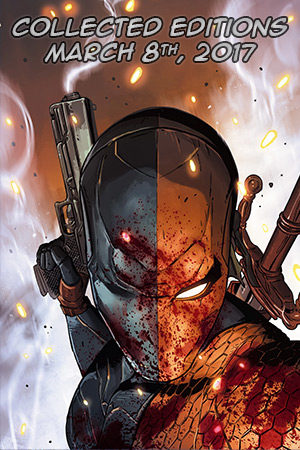 What’s out? Not every publisher is as big or as consistent as DC and Marvel. The release list shifts day-to-day in the final week before they hit the shelves, so that you have to check the Preview Mag website on a Saturday to see what definitely hit the trucks.

Ah, but here’s the important question: Why care?

First, because single issue AKA “floppy” comics are a pain to keep up with and to keep. It’s way easier and more satisfying to buy complete stories.

But, more importantly – some of these comics are really good stories.

DC’s Rebirth initiative has generated a lot of hype for major heroes like Wonder Woman and Superman, but some of the below-the-fold titles are generating the most buzz amongst fans.

One of those has been Deathstroke, by beloved author Christopher Priest – who was also responsible for the definitive run on Black Panther. Deathstroke Vol. 1: The Professional is the first volume of his reboot and from what I’ve heard it’s great. If you’ve never read Deathstroke before, he’s the totally serious and merciless assassin that Deadpool has parodied to much greater success. 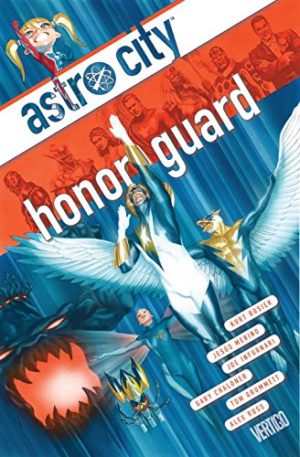 DC Collected Editions hit the mass market one week after the direct market, so these books are available from Amazon on March 14. See Crushing Comics – Guide to Collecting DC Comics for more on DC’s collected editions.

Deathstroke Vol. 1: The Professional – Collects Deathstroke (2016) #1-5 and Rebirth. While I’ve yet to read further than stellar Rebirth issue into this run, this Christopher Priest series has been the sleeper hit of Rebirth for almost everyone I know reading the line.

Superman Vol. 2: Return to Glory paperback – Volume 2 is really a misnomer here – this is the eighth and final book collecting Superman’s 2011 New 52 series, but the second volume written by Gene Luen Yang (who would go on to write New Super-Man in Rebirth). It includes Superman (2011) #45-52 and Annual 3 and is available in hardcover. Issue #51 continues to Batman/Superman #31, which is clearly not collected here as part of The Final Days of Superman (hardcover / paperback).

Wacky Raceland – Collects Wacky Raceland (2016) #1-6. This was one of the less-noticed of DC’s Hannah Barbera re-imaginings, the pinnacle of which is widely acknowledged to be a grown-up, modern take on the Flintstones (yes, those Flintstones). 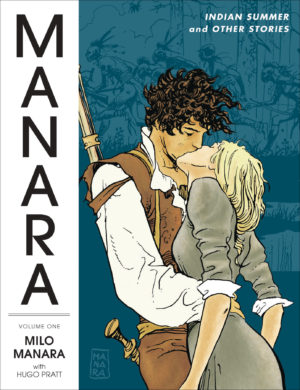 30 Days Night 15th Anniversary 30 paperback (Direct Market) – As a DM book this isn’t available on Amazon, but you can pick up a mass market paperback version of the comic that inspired the film.

Revolution: Transformers – Collects The Transformers, More Than Meets The Eye, and Till All Are One Revolution One-Shots plus the 2015 Holiday Special. They’re more than meets the eye but your eyes are not deceiving you – you saw this book on my release list two weeks ago! It just goes to show just how mutable comic collection releases are compared to books and music.

Teenage Mutant Ninja Turtles 100 Project paperback – This, too, is from two weeks ago! Appears to be a Direct Market only book. The “100 Project” format sees 100 different artists contribute a unique cover for a specific issue, which are then collected to benefit The Hero Initiative. 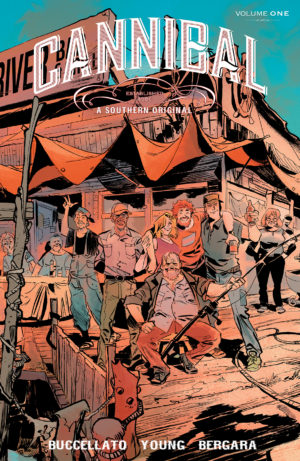 Cannibal Volume 1 – Collects Cannibal #1-4 by Brian Buccelato, Jennifer Young, and Matias Bergara. I haven’t heard much buzz on this, but former colorist Buccellato is generally well-liked as an author on his DC work.

The Walking Dead Volume 27: The Whisperer War – Is listed for release this week on Amazon despite never appearing in Previews. Apparently I don’t understand the special magic of Walking Dead (likely the top-selling graphic novel series in existence at the moment) quite yet. It collects The Walking Dead #157-162 by by Robert Kirkman and Charlie Adlard.

This is not amongst my favorite of Marvel’s recent events, but the reason why explains why you might like it. You see, Axis is the final chapter of Rick Remender’s 2010 Uncanny Avengers volume. It could have easily just been regularly numbered issues of that series (which ended as the event began), but Marvel saw the opportunity for wider tie-ins and changes in status quo.

That’s how events are born!

Yet, as a standalone event this is on the weak side – it sort of flies by in a bit of a muddle. It’s not essential for any characters aside from Iron Man, Sabretooth, and Doctor Doom in the immediately following continuity.

This is the second consecutive Cloak and Dagger classics collection (which could easily be retitled as an “Epic” if Marvel intends to finish out the line), still all written by their creator Bill Mantlo. It gathers their first ongoing series in its entirety and the first two issues of the Strange Tales series they split with Doctor Strange.

With this volume we’re into the denouement of Daredevil’s first classic era, which started with Black Widow’s co-starring turn at #81. She’s still appearing in the title, and Gerber is a year into his scripting duties here (plus a handful of issues drawn by Gene Colan).

This run is considerably less notable than the one before it, which includes an improbably cosmic encounter and appearance from Thanos. Issues #108-112 are the only ones to have been reprinted previously in color, in Women of Marvel Omnibus, as they co-star both Widow and Shanna The She-Devil.

Marvel’s Epic collections are hefty paperbacks of solid quality and matte paper that collect indisputably chronological runs of key series with plenty of extras and tie-ins baked in.

Fans were a little surprised by this edition, since there is massive demand for an omnibus of this material! On the other hand, the not-that-old Classic collections of the material are seriously out of print and going for absurd prices, and there is New Mutants movie buzz building now that a cast has been announced.

Epic Collections don’t necessarily preclude omnibuses to follow, as we’ve recently seen from Spider-Man. Plus, the great thing about these 12-20 issue Epic collections is that they quickly rampage through a short series like New Mutants – and, since they can be released out of order, they can easily plug existing reprint gaps (of which New Mutants have just one – #74-86).

For more on the material, read my monstrous write-up on the would-be omnibus.

The only collection of new Marvel Universe material for the week, and its just in time for Iron Fist‘s debut on Netflix. There is a rising level of fan fervor for author David Walker in no small part due to this series, the first to pair Cage and Rand exclusively for several years.

Walker and artist Sanford Greene are both black creators, which marks a landmark for a Luke Cage starring series! Despite a slightly dismissive treatment of Jessica Jones, if you enjoy Luke Cage’s show but want something a little lighter thematically this series a great choice for you – but you should start with Volume 1!

Okay, this is seriously cool. It’s “connect the dots” on steroids, with each picture comprised of hundreds of dots which, when connected in the correct order, reveal a Spider-Man hero or villain! Graphic designer Thomas Pavitte’s clever work has been praised and past volumes have been a hit. This is a great gift for a slightly more sophisticated comic-reading kid who’s not quite ready to illustrate her own books yet.

Selected Collected Editions from other publishers for March 8, 2017 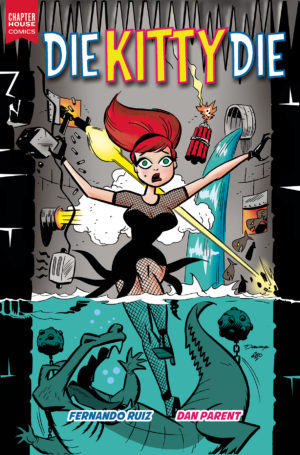 California Dreamin’: Cass Elliot Before The Mamas & The Papas OGN Hardcover (:01 First Second) – You probably know Cass Elliot better as “Mama Cass,” the driving voice of The Mamas & The Papas.This original graphic novel by Pénélope Bagieu was originally out in the original French in 2015; this is its first English language printing. I’ve come to really appreciate the quality of First Second books lately, both in content and build, but this pen-sketched B&W work might not be the best introductory volume for you.

(Edited to add: Here’s a cool write-up on Bagieu for International Women’s Day.)

Die Kitty Die Hardcover (Chapterhouse Comics) – This witty indie series stars a witch who stars in a comic in which she’ll be killed but it turns out her publisher might also be trying to kill her in real life. The concept paired with the cartoonish pin-up art (think DC Bombshells) makes it look like a delight. Note that Amazon lists this as a TPB, but you can buy it directly from Chapterhouse in their Third Party Seller section.

Disciples (Black Mask / Caliber) – Collects Disciples (2016 #1-4. Bucking the typical direct-market-first trend, Amazon had this for sale in late 2016! This magical title’s B&W interiors have a 90s indie comics vibe to them, if you did that sort of thing.

Giant Days Vol. 4 (Boom! Studios) – Collects Giant Days #13-16 of this Eisner-nominated snapshot of university life by longtime webcomic creator John Allison (who I’ve been reading for 20 years now) and illustrator Max Sarin. I have a lot of friends buzzing over this book and I have tons of goodwill for Allison from his Bobbins days. I really need to pick up Volume 1!

Nightlights OGN Hardcover (NoBrow Press) – This beautiful young readers graphic novel from Lorena Alvarez has absolutely beautiful illustrations that are a bit reminiscent of Lumberjanes. Definitely use the “Look Inside” feature on Amazon to check it out! I think I’ll be buying it to read with the little one.

Sanctum OGN paperback (Humanoids) – A paperback edition of the by Xavier Dorison and Christophe Bec graphic novel, previously in hardcover.

Secret Coders, Vol. 3: Secrets & Sequences OGN (hardcover / paperback) (:01 First Second) – An younger readers book from Gene Luen Yang, author of American Born Chinese, New Super-Man, and the Superman collection listed above! It’s about a coding academy whose mysterious founder left a series of mysteries for its students (and robots) to unravel. Yang’s humor tends to trend just old enough that a pre-teen/tween crowd would delight in it, so while it trends too old for my post-toddle this could be a good pick for the would-be little coders in your life. Start with Volume 1 (hardcover / paperback)