The Guide to Namor, The Sub-Mariner is newly updated not only with recent and upcoming collections, but with a major formatting and continuity clean-up!

In 2010 Namor was newly-gifted with an X-branded ongoing for the first time and I felt compelled to give him his own page in my X-Men Collecting Guide, despite the fact that I knew next to nothing about the character, his Golden Age history, or the tons of different teams where he has had a passing membership.

Since then I’ve done a lot of cleaning up of his page, but it’s remained a sort of ugly step-child of my original guides. Well, today that ugly duckling has turned into a sea-faring swan, because Namor’s page is finally up to the standard of my newest, most-modern guides.

Don’t need a guided tour of Namor’s every appearance from the 1940s to present? Keep reading for a briefer overview of the Sub-Mariner’s history, where to start reading him, and his newest collections. Plus, find out how much of Namor’s lengthy history has been reprinted in collected editions? 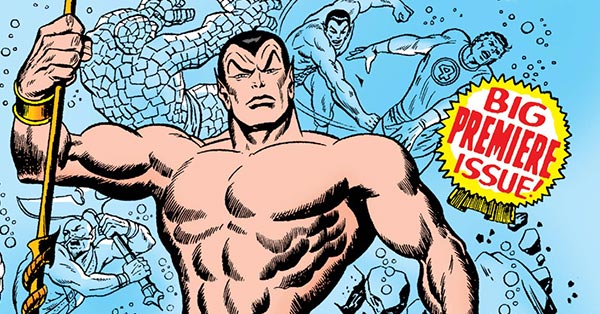 Who is Namor, The Sub-Mariner?

Namor was the original hero of the seas, pre-dating Aquaman by two whole years when he appeared in Timely Comics’s first issue – Marvel Comics #1 in 1939. (Timely eventually more or less become Marvel.) 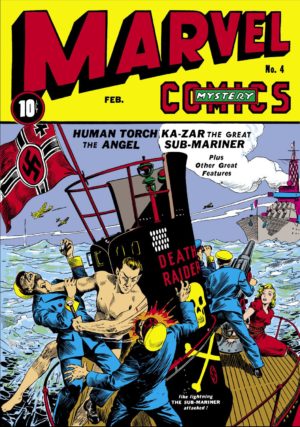 Yet, Namor and Aquaman share an incredibly similar history. Both are hereditary kings of Atlantis borne from Atlantean royalty and human seafarer fathers. Both have an uneasy and often-usurped claim to Atlantis’s throne. Both are similarly super-strong, though Namor is no longer said to communicate with fish and Aquaman has not consistently been able to fly.

Where Namor greatly differs from Aquaman is that he is not always a hero. Namor could generously be described as “militant” in his attitude toward the surface world, a position that saw him flood New York back in the 40s and destroy Wakanda just a few years ago. He returned to Marvel’s pages in the Silver Age when he came to blows with the Fantastic Four and he frequently aligns himself with their foe Doctor Doom, but it’s never out of evil – always out of self-interest.

Namor was one of the few Marvel Silver Age stars who did not make the leap to a 1980s ongoing. He was a frequent guest star in Fantastic Four and an occasional Avenger until John Byrne brought him back to prominence with a 1990 solo series. However, his biggest boost in visibility came in the 2000s, when Brian Bendis imagined him as a member of the retconned Illuminati – powerful men who kept careful tabs on the safety of Marvel’s earth.

Later, after Dark Reign in 2010, Namor was absorbed into the X-Men franchise as Marvel’s first mutant! While that relationship did not last into 2012’s Marvel Now, Namor’s remained visible due to his renewed membership in the Illuminati in Hickman’s New Avengers. That role also saw him as a target of the Squadron Supreme in 2016 with All-New Marvel Now.

Getting started with Namor, The Sub-Mariner

Namor’s focus has changed so much over the years that it’s hard to point to a single comic where you can read a baseline story about him. 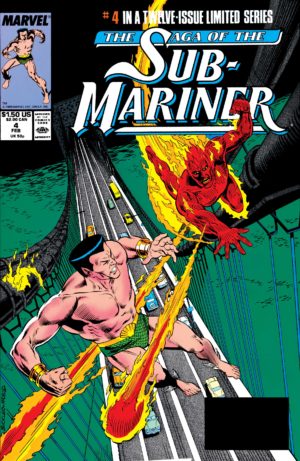 This is a rare occasion where I’d strongly recommend a Silver Age read to you, because Namor’s Silver Age stories are great. You can pick up his first Marvel Masterworks in hardcover or paperback. To learn more about that run, read my recent post highlighting it as a Most-Wanted Marvel Omnibus.

You could also get started with his 1990 John Byrne series, but its collections cut off abruptly after the second volume.

However, my main suggestion would be Saga of the Sub-Mariner, a 12-issue series that completely recapped Namor’s history from Golden Age through 1988 when it was released. Despite being a recap book, this series has terrific art and really amps up the epicness of Namor’s story. I love it so much that I bound my own copy before the official one was released!

2017 hasn’t produced any Namor collections, though the final volume of his Marvel Masterworks series is out in January. However, his seemingly MIA status quo from Marvel’s current books is addressed in Squadron Supreme Vol. 3: Finding Namor.

Don’t forget that Namor was a founding member of the Defenders, whose guide I updated last week, as well as a member of The Invaders.He conspired with Dr. Doom on an ongoing basis in The Complete Super-Villain Team-Up.

Also, Kieron Gillen put him to good use on his run on Uncanny X-Men starting with the first issue in Uncanny X-Men: Breaking Points and continuing through the end of his run.

Namor has the longest history of any Marvel hero, since he’s been around since their first comic book. How much of those nearly 80 years(!) of comics are collected?

While I don’t usually include a character’s guest appearances or team books in the tally, I do here – because of Namor’s Golden Age track record, co-starring in Super-Villain Team-Up, and his permanent membership in The Invaders (though not in The Defenders, Avengers, Illuminati, or X-Men).

That’s a lot of series to comb through just to find out that Namor is sitting in the same 70-80% collected range as most of Marvel’s other Silver Age heroes who recur through the years. We’re probably never going to get his missing Golden Age material as a physical reprint, as there’s just no market for it, but whenever he next hits prominence I could see Marvel knocking out his 90s series in 3-4 Complete Collections and also collecting that 2003 “Young Namor” series to effectively get us a completely collect Namor from his return in the Silver Age through present.

Want to track down every last Namor collection plus learn about ever time he has ever made a guest appearance? Head to the Namor, The Sub-Mariner guide for all the details!