You are here: Home / consume / games / Crushing On: Mini Metro

What do you do when you want to turn off your brain?

For me, it turns out the answer is “use it.”

I know, we’ve been over it before and it doesn’t make any sense. What I mean is that my favorite brain downtime is playing with inane little logic games. Some people like button mashers. Me, I like things with numbers and lines of best fit. I grew up on Final Fantasy. I want to get lost in a forest of meaningless logic and arbitrary rules where fast reactions are not a factor. 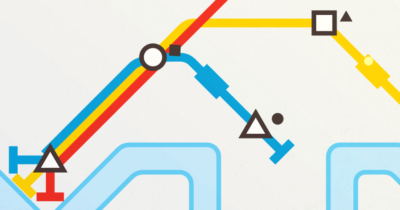 Recently, my obsession has been Mini Metro, which you can get on App Stores or Steam, but you can also play for free right in your browser.

The concept is dead simple: connect the subway stops of a quickly-growing city using a limited number of lines, trains, and tunnels, but unlimited tracks.

Doesn’t sound so hard, right? Well, when you have no control over where those stations pop up or where their commuters want to go things get tricky.

It’s a terrific game for brief downtime (like commuting!) and you can play it care-free or with great exactitude. It’s the sort of thing that fits into the little spaces in your life when your brain simply isn’t up for anything else. I love the simple iconography, although I will say that the lack of explanation of how the game works might make your first thirty minutes pretty maddening – especially when it comes to the dragging and dropping of lines and trains.

I played the browser version for a few days and (despite my initial frustrations) eventually broke down and actually downloaded Steam so I could have a full version where I could select cities and track achievements. I might not hesitate to pay for things I like, but getting me to download something is really hard.

Plus: it was made right here in New Zealand by developer DinoPoloClub!