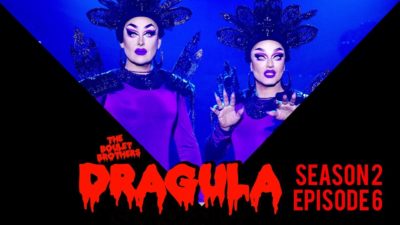 It’s week six of Dragula, the search for a Drag Super-Monster who is equally gifted in the areas of glamour, horror, and filth.

It’s the second week in a row the ladies could turn out a traditionally “pretty” look that still had a horrific element to it, but had to be able to back it up with serious performance chops.

That played out almost exactly as it did last week, but in a slightly smaller field the minor, unforced errors from a few  queens were judged even more severely than they were last week in the cabin in the woods.

Now we’ve got four queens left, and two of them feel like an utter lock for the finals – but the other two will have to fight tooth and claw next week for that final spot.

Enough talk – watch Dragula’s sixthh episode, and then see if you agree with how I’ve ranked the queens below. 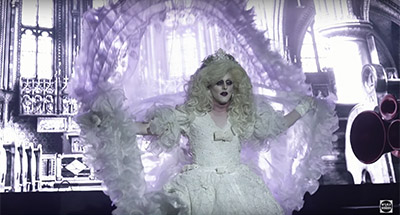 Biqtch Puddin’ (Instagram / Twitter / Facebook) seemed to be the only queen this week not to cause controversy on the judges panel as she cruised to her fourth high placement in a row.

I’ll admit, I didn’t really understand Biqtch’s dominance in this challenge. While she featured some solid theatrics in her floor show, her look was the plainest of all the girls. Not only did it not read “gothic” for me, but it didn’t completely read as a wedding dress either once she stripped off her multi-layered cape. I was completely convinced she would be in the bottom and was shocked that the judges loved her.

With yet another strong performance and second place finish, Biqtch has all but locked in her spot in the finals. She’s not the utter definition of glamour, horror, or filth, but she’s reliably trashy in a way that always touches on each of those requirements. 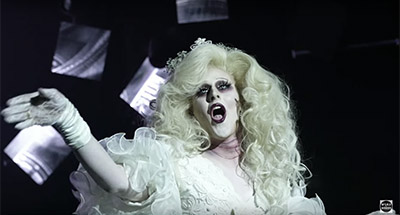 The one wrinkle is that we haven’t seen Biqtch in an Extermination challenge since Week 2, and playing paintball isn’t all that scary. I’m not certain her carefree performance aesthetic will translate to being hardcore through a test of endurance. While I’m sure she could shrug off the bad tattoo or cold feet challenge, it’s hard for me to imagine Biqtch’s happy-go-lucky personality enduring something seriously uncomfortable like the needles or the disgusting meal.

Ultimately, it probably a moot point – any three-person Extermination leaves the possibility of at least one queen who is canon fodder compared to Biqtch. It’s really hard to imagine her doing so badly next week that the Boulets would want to dismiss her. 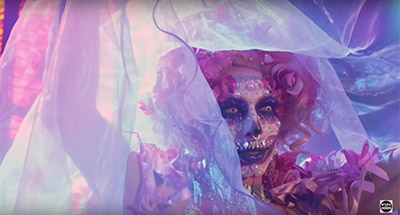 James took what should have been an easy win for her and went completely sideways with it. She was gothic without the goth and a bride why didn’t look very bridal. While her look was one of the most intricate and beautiful we’ve seen from any queen all season, she couldn’t find the time to acquire white shoes so she sprayed a black pair and she couldn’t be bothered to show her fan during her floor show even though it was part of the challenge.

It all stinks of a sort of the casual laziness of someone who is assuming she’s the front-runner, which made it the perfect time for her first Extermination challenge since Episode Two. There’s no way that James comes back after nearly losing to Abhora without being bloodthirsty for a challenge win, and while she’s on her A-Game there will be no missed details. 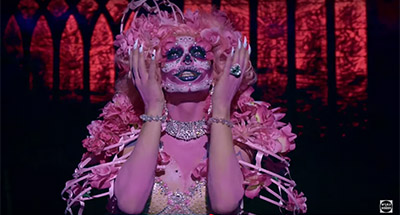 Even with missing the details of her accessories this week, James’s look was monstrously memorable. I’d hold it up against any of the best looks from Drag Race, aside from her scuffed up shoes.

We’ve seen plenty of make-up influenced by Day of Dead sugar skulls, but James went beyond what I’ve seen before with flower petal eyebrows and her signature bejeweled face. Even her deconstructed hoop skirt was dazzling, even if it didn’t exactly tell a story along with her make-up

Unless James completely misunderstands the assignment in the next challenge, she is a lock for the finale. Even if she misses the point entirely, I cannot imagine any Extermination the Boulet’s could throw her way that could crack her resolve. 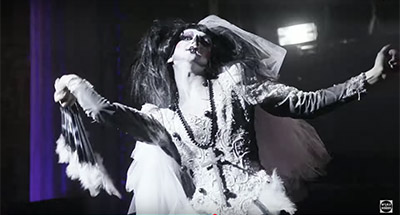 Abhora (Instagram / Twitter / Facebook) won the week in a devilish split decision from the judges, who gave her the win but also placed her in the Elimination Challenge.

I happen to agree with the panel in both respects. Abhora’s wretched demon bride look and vicious floor show was the one that stood out to me the most, even moreso than James’s pink poison flower. Abhora returned to her long-nosed “horror goblin” motif, yet she found a way to make the face the prettiest we’ve seen from her with high slashes of blush and pursed black lips.

Yet, she also had some of the weakest moments – her look was messy (spray paint doesn’t exactly scream gothic), and all of her stage gimmicks had moments of failure in them. 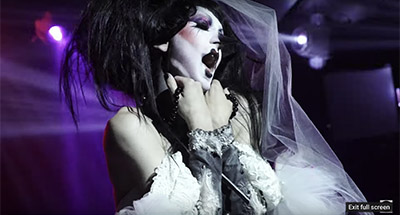 The good and the bad balanced out for Abhora this week, but what will it mean next week as she’s vying for a spot in the finale? I don’t know if her unpredictable punk energy will enough to unseat the glamorous, detail-oriented Victoria from the third spot.

If we were going off of narrative momentum, I’d say the editing of the show has built us up to Abhora making the final three – she is one of the most full-formed characters out of all of the cast. Yet, after hearing their critiques this week, I don’t think Abhora she can prove in the span of a single week that her act can be organized enough for the Boulets to consider her for the crown.

I had Abhora at four when I first set this ranking, but after reading my write-up of Victoria, I think Abhora has the slightest edge heading into week seven. I think she’ll make it through largely because she is such a fascinating character. 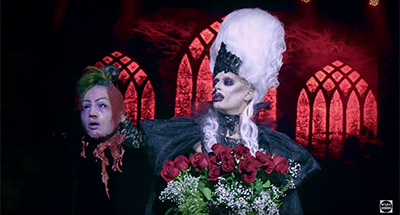 Victoria Elizabeth Black (Instagram / Facebook) hit a challenge made for her but turned out to be safe rather than notching her second win.

“Gothic Bride” seems like the perfect marriage of Victoria’s makeup expertise with her ability to portray a reserved sense of high-end glamour. Her look was pure “Bride of Frankenstein,” with sunken cheek bones and a massive plume of shocking white hair.

Despite doing the best out of all five queens in nailing the visual aspect of the challenge, Victoria failed in the worst way possible – she failed to excite the Boulet Brothers for the fourth week running.

After being transfixed by her in the first two weeks, the Boulets have saddled her with the narrative of “we see your growth” ever since. She’s gotten some lukewarm praise in the past two episodes that the growth is moving in the right direction, but that’s the praise you give a qualified also-ran – not the Next Drag Super-Monster. 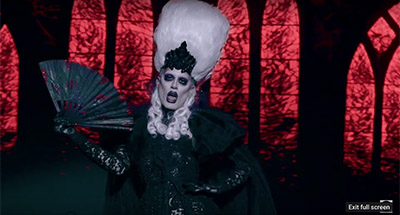 It’s frustrating to watch, because Victoria’s one weak spot seems to be not necessarily performance but performance energy. She’s fantastic at standing still and looking creepy, but once she’s in motion I find myself almost screaming at the screen, asking for a little bit more. Her stoic, wooden lip sync in the floor show looked like it was in slow motion even when edited with full-speed clips.

While the Boulets would love to crown someone with as beautiful as Victoria who has her horror FX makeup chops, they are first and foremost party promoters. They want someone who can rule the stage! Despite Victoria’s beauty and her many visual talents, I sincerely doubt there is anything she can do this week to reverse her fate as a non-winner of this show when Biqtch and James have been destroying the competition week after week.

Which brings us to the dearly departed… 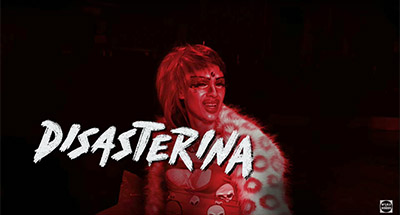 I’ve really grown to love her these past few weeks, but I think she has been exterminated in the perfect spot in the competition. Her plastic disaster looks aren’t quite as interesting as seeing whatever spectacular effects Victoria turns in or whatever wreck Abhora might pull out in any given week.