You are here: Home / consume / comic books / New For Patrons: The Definitive Guides to Swamp Thing and DC’s Houses & Horrors 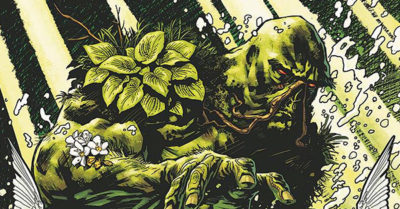 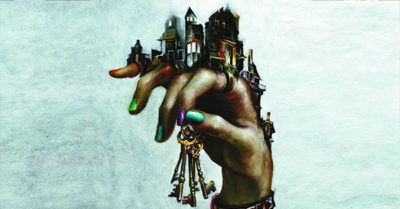 That’s just not the case.

While Swamp Thing does have the much longer-running series of the two mossy characters, Swamp Thing’s guest appearances were absolutely scarce prior to New 52 in 2011. 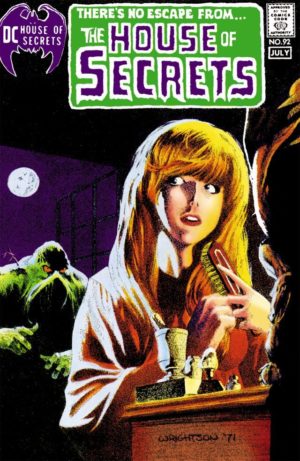 That’s scarcity of Swamp Thing down to an interesting combination of factors.

One reason for his obscurity is that Swamp Thing debuted in 1971 in a horror anthology, House of Secrets, before meriting his own 1972 solo title.

While Swamp Thing was a part of the DC Universe and would later have run-ins with Superman and Batman in their respective team-up titles, he was far enough removed from the core of DC’s storytelling that he wasn’t going to turn up in Justice League or The Flash. And, as with many of DC’s 70s characters, when his popularity fizzled at the end of the decade he simply disappeared.

(To be fair, Marvel has a similar wave of characters, like Luke Cage, whose disappearances tended to begin in the mid-80s as their original ongoing titles stalled.)

A second factor in Swamp Thing’s scarcity in other DC titles is Alan Moore.

Moore took over the 1982 volume of The Saga of the Swamp Thing (launched to take advantage of the character’s cinematic fame) in 1984 with issue #20. It was Moore’s first major, mainstream US hit after racking up a reputation in the UK but before his landmarks like Watchmen, The Dark Knight, Killing Joke, and V for Vendetta.

Despite being relatively early in Moore’s career, Swamp Thing showed that his mature themes and deconstructionist urges were intact from the start. In fact, Moore’s Swamp Thing was the first Big Two comic to drop the Comics Code entirely (rather than just for an issue or two, as Marvel did with Amazing Spider-Man‘s drug-focused issues). Moore was happy to dissect DC’s Universe in Swamp Thing, which made it an intimidating prospect to pair Swamp Thing with a traditional hero in one of their own books (although it’s for this same reason that Wolfman and Perez did find a use for him in Crisis on Infinite Earths).

In 1993, Swamp Thing became one of the six founding titles of Vertigo, along with Animal Man, Doom Patrol, Hellblazer, Sandman, and Shade. While all of those titles began rooted in the DC Universe, all of them wandered down an increasingly weird, mature, self-referential, and sometimes psychedelic path on the way to Vertigo’s formation. While they were free to reference the rest of the DC Universe, the rest of the DC Universe largely stayed silent on them, lest any unsuspecting youths be sent blithely wandering into Vertigo’s Mature Readers territory. 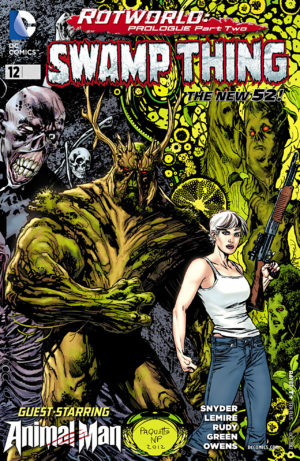 Swamp Thing’s lengthy Vertigo run ended in 1996 and remains second only to Hellblazer in issue count. After a few big guest-starring turns at the end of the millennium, he’d reappear in ongoing series in 2000 and 2004. He disappeared after that in 2016, only to be briefly referenced (but also discarded) at the end of Brightest Day in 2011.

Swamp Thing’s biggest break came with New 52. DC dug deep to fill out its massive roster of launch titles, which let Scott Snyder and Yanick Paquette pen the first mainstream, superheroic take on Swamp Thing. They kicked off the run with Superman and crossed over with his Vertigo buddy Animal Man while still maintaining Wein’s origin and Moore’s themes.

Even before his ongoing series ended, Swamp Thing found himself starring in the massive Forever Evil: Blight crossover – one of DC’s biggest direct crossovers this decade. He followed it up by joining Justice League Dark, which marked his first ever ongoing appearance in a title other than his own for longer than an arc.

It’s clear that current DC stars like Snyder, Tom King, and James Tynion adore Swamp Thing and are eager for any excuse to use him in their titles. While DC’s Rebirth began without an ongoing title for him, Swamp Thing scored major, memorable guest turns in Constantine, Superman, and Batman, – not to mention the actual Rebirth special itself. He also popped up in events like Metal and Milk wars. That evolved into a string of anthology title appearances and joining the relaunched Justice League Dark in 2018 as a supporting character along with his longtime frenemy John Constantine.

Swamp Thing wasn’t on my radar as an upcoming guide as late as October. At the time, I was working on the “Houses and Horrors” guide to accompany my multiple-guide launch of the Sandman Universe on Halloween.

“Houses & Horrors” was meant to cover the fourth of the new Sandman Universe ongoings, House of Whispers. It also held the origins of much of Sandman’s supporting cast – like Cain, Abel, Eve, Lucien, the three Furies, and even Destiny. The more I read and learned about DC’s suspense anthologies, the more I became fascinated by how Neil Gaiman plucked these mythological, archetypal characters from obscurity to make them full-blown players in the background of Morpheus’s world. 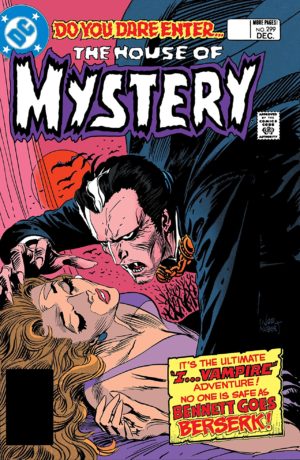 However, the overall content of the guide was utterly tertiary to Sandman’s ongoing story. Unlike Marvel’s Silver Age anthologies, which all converted to superhero titles over the course of the 60s, DC’s anthologies just… kept on being scary, some of them right through the early 80s. That meant checking over a thousand issues one by one- barely any of which formed tidy, coherent arcs collected sequentially.

On my second day of trying to power through researching that guide, I hit a moment of utter burn-out when I discovered Swamp Thing’s debut in House of Secrets (1956) #92 was collected in about a dozen places. That included several similarly-named collections.

Issues like that tend to make my brain melt when I encounter them in my research. They’re a huge time suck. Just one comic like that can turn into an entire hour of research and linking.

Eager to do anything other than figuring out the mess of House of Secrets (1956) #92, I decided to sketch out the outline of a Swamp Thing guide (where that issue rightfully belonged), and discovered it wasn’t as hard as I thought it would be because he really didn’t have many appearances.

And that brings us back to the start of this story. Luckily, I was pretty far on “Houses & Horrors” when I had my brain melting moment, and with Swamp Thing completed it only took a few more hours to whip the H&H guide into shape (abetted by understanding the anthologies and characters much better in the wake of launching the Sandman guides).