You are here: Home / consume / Crushing On / Music Monday: “King” – Florence + The Machine

We all experience music in different ways. 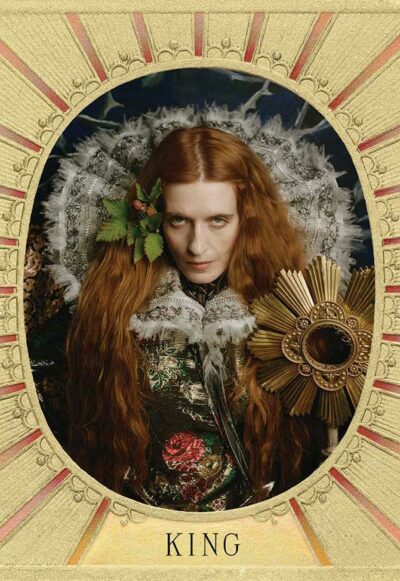 When Cecily told me there was a new Florence + The Machine song out a few months ago, she said, “the first time I listened to it, I saw colors.”

Seeing (or otherwise experiencing) colors when you hear music is a form of Synesthesia. Explained simply, Synesthesia is when you experience one kind of sensory input, but it triggers a secondary perception or sensation. A common example is that some people think or see the color blue when they see the number “8” – even if the number is written in black or yellow.

Cecily’s comment made me consider how I experience new music.

As a musician, when I hear a song for the first time my brain usually begins to dissect it. How does the story in the lyrics track, what are the intervals in the melody, what is the chord structure, how do both change in the chorus, etc.

Yet, if I can press pause on my musician brain for long enough, I also hear music in a different way. Sometimes when my musician brain is switched off I hear a song and I get an intangible feel from it, separate from its genre or musical structure.

I don’t meant that the song makes me feel something, like happy or sad. It’s hard to describe. It’s almost more like a sensation. Some songs feel cold, slick, and metallic, like if I were to lick them my tongue would get stuck. Others feel like rubbery bubbles in a roiling boil, all ricocheting off of each other. Some have a sensation of fullness, even if their arrangements are sparse. I’m not picturing an image or a scene, but a concept.

I don’t get a feel from every song, and I don’t necessarily like a song if I get a feel from it. Sometimes I get the feel and I’m like, “Oh, so that’s what this song is,” and then I never need to hear it again. Sometimes the feel is addictive and I immediately crave more of it. Other times it is fleeting, and if I don’t jot it down in the moment I lose it forever.

Is that also a form of Synesthesia?

It’s hard to say, partially because I have so much difficulty defining it. My “feels” are not frisson, or “musical chills,” where certain musical passages give you physical goosebumps. I get those, too, especially on big crescendos! But, they’re distinct from this other sensation.

This was all on my mind the first time I listened to “King” with E (a major Florence fan). We pumped it out at maximum volume through our stereo speakers in the living room.

At first all I could hear was the music. The distance between Florence’s vocal and the rumbling bass. The weird chromatic climb in the second line of the chorus. The way the warbling tremolo in the low end slowly increases at the end of the second verse to give the illusion of increased tempo.

Then, suddenly, something changed. It would be easy to say that it happened at the 2:43 mark when two-part harmony with heavy vibrato begins. On re-listen, I realize it was on the peculiar resolve of the chorus at 2:21. It wasn’t what my musician brain was expecting, and the dissonance (in expectation, not in arrangement) shook me out of musician mode and into sensation. Yes, there was frisson from the intense crescendo and the vibrating harmony with the addition of a middle layer of strings.

It was also something more than that, something I didn’t write down at the time and now may never be able to recapture. It was something like a massive constructed wall of stone, like a castle or the Great Wall of China.

(Like, duh, the song is called “King,” getting “castle” from it wouldn’t exactly be complex neuroscience.)

But, not the wall itself. Not an image of the wall. Not its texture More like… the space something like that takes up. It was more like I was feeling how the natural world interacts with something so solid and manmade. How the wind breaks against it, how it is dappled with dew in the first strains of sunlight, and how the sunset is splintered by its mass.

Yes, those howling harmony vocals backed by strings could certainly evoke “gusts of wind” for everyone, but where did the rest of it come from – the dew and the light? Why did I feel it so acutely in my brain at that moment?

That’s not quite it, but I don’t know that I can ever perfectly describe these sensations even as they are happening. But I knew, in that moment, that I understood exactly what Cecily meant about the colors she saw.

“King” is just that sort of song.

Previous Post: « Captain Crunch and the Butterfinger Cowboy
Next Post: It’s time to DIE – pre-order the deluxe hardcover AND the role-playing game! »