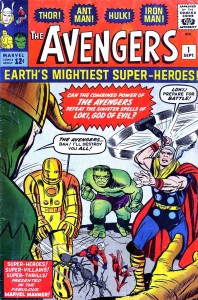 The Avengers have always represented Marvel Comics’ heaviest hitters, from their beginning with Captain America, Iron Man, Thor, and Hulk, to today’s team that features Wolverine, Spider-Man, and Captain Marvel.

You might love those characters and the recent movies that feature them, but when it comes to comic books it’s easy to get lost. Avengers have appeared in comics for over fifty years. Where should you begin… and how?

Luckily, many those single issues are collected into graphic novels – hardcovers trade paperbacks, or “TPBs.” Figuring out which collections to buy and in what order turns out to be a very complex task – half research project, half detective novel.

I’ve taken all the work out of it for you. This guide can help you figure out what trade paperback to buy no matter what run of Avengers comics books you’re looking for. If it’s collected in a graphic novel, it’s in this guide.

Each of the following pages contain the titles, issue ranges, ISBNs, and links to the Avengers collections from each ongoing title.

Plus, if you love Avengers you might find the following guides useful:

Seeking the solo title of your favorite Avenger? Never fear – visit Crushing Comics to find over a dozen individual Avengers pages, with more added all the time!