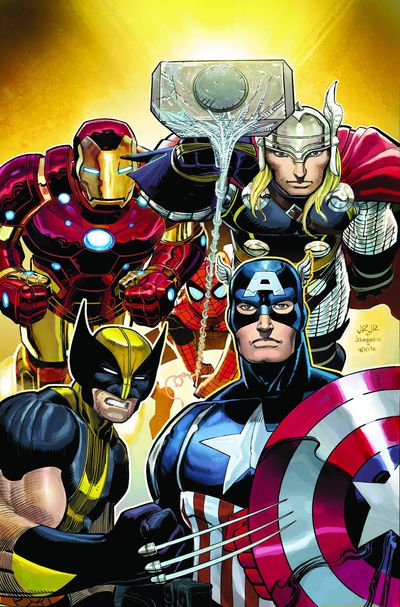 This reading order encompasses all of the core Avengers team titles and accompanying events that occurred during Brian Bendis’s tenure writing The Avengers. That began with Avengers #500 in 2004 and ran through the end of the 2010 volumes of Avengers and New Avengers (as well as Avengers vs. X-Men) at the end of 2012.

Technically, this is a “trade reading order” because it orders the stories largely in accordance to how they were originally collected for trade paperback and premiere hardcover. However, the idea of “trade reading order” doesn’t have too much meaning at this point, since most of this material has been collected in at least one additional format, plus many fans are now reading digitally!

So, why not just give you the issue-by-issue order?

When it comes down to it, I not only want to help you read comics, I want to help you enjoy reading comics. Outside of a direct crossover, reading a stack of shuffled single issues from multiple titles isn’t generally a rewarding read – even when many of the issues are coordinated by the same writer.

This reading order guide takes advantage of the natural breaks in stories created by Marvel’s collected editions wherever possible so you can read in bigger chunks. This means you can read without switching titles mid-book, mid-story, or even mid-issue.

To learn how to purchase these issues in various collected editions, visit the page links below for each title. Individual runs are also linked to their home guide elsewhere on Crushing Comics.

Note that while I include the Avengers-in-training titles Young Avengers, Avengers: The Initiative, and Avengers Academy in this reading order, none were written or concepted by Brian Bendis and they are not generally strongly integrated into the central stories of his Avengers. You can easily skip these titles in your Avengers read, if you prefer.

And, finally, for a behind-the-scenes look at the birth of this guide, read my announcement blog post. END_OF_DOCUMENT_TOKEN_TO_BE_REPLACED