Chris Claremont departed Uncanny X-Men with issue #280 in 1991, leaving massive shoes to fill both in talent and in his unprecedented longevity on the franchise.

In his wake, the X-Men franchise spent a decade and over a hundred issues filled with many writers, even more crossovers, and ultimately a unclear direction for what had become comics’ biggest franchise. 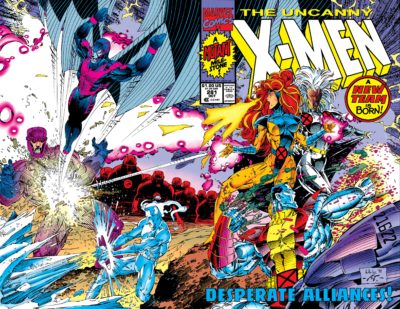 After some creative shuffling in the six months after Claremont’s departure that saw John Byrne writing dialogue for fully plotted and drawn issues from Whilce Portacio, writer and former stand-up comedian Scott Lobdell took over Uncanny X-Men. Lobdell wrote almost every issue from #286-350! This 65-issue run makes him the second-longest-running author of Uncanny.

Though Uncanny X-Men featured a handful of crossovers in the #199-280 range, it was during Lobdoll’s run that the X-Men expanded to a truly multi-faceted, multi-title enterprise covering six ongoing titles (including a second flagship).

At one point there are four major crossovers in under two years – X-Cutioner’s Song, Fatal Attractions, Phalanx Covenant, and Age of Apocalypse!

After the resolution of Onslaught in 1996 with issue #337, the massive, multi-part crossovers ceased. However, the idea of an almost constantly-running crossover between each month’s Uncanny X-Men and X-Men continued until Grant Morrison took over the latter title with New X-Men in 2001.

The reigns of the title changed hands several times in that post-Onslaught period, including a well-loved 16-issue run by Steven T. Seagle, Alan Davis taking over scripting duties, and a return by Lobdell to close out the era. Even Claremont himself makes a brief, disastrous return to the title!

This era began with the “Gold Team” of Storm, Jean Grey, Iceman, Archangel, and Colossus, soon joined by Bishop. However, the team lines begin to evaporate around issue #300. The following forty issues prominently featured that group, plus Wolverine, Banshee, Gambit, Rogue, Psylocke, Cannonball, and even Sabretooth. After the end of Onslaught in issue 337, the cast became even more variable – at one point featuring the original X-Men.