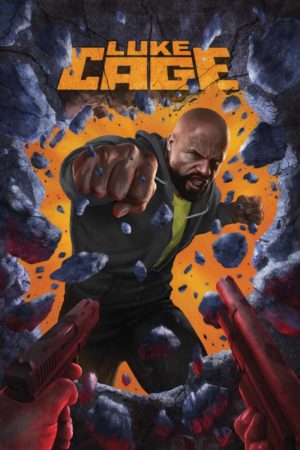 Luke Cage emerged from Marvel’s early-70s habit of stealing themes from pop culture – in this case, the emergence of Blaxploitation films. That made him only the second prominent black hero at Marvel, after Black Panther – who had become a staple in The Avengers.

Cage’s story could have easily come to an end with the waning of the 70s, but Marvel made an unusual move in 1978 – they introduced the similarly fad-based character Iron Fist into Cage’s title, rechristening it “Power Man & Iron Fist.”

A street-smart man with unbreakable skin and a billionaire’s son who mastered a secret martial art. This memorable odd-couple pairing lead to another eight years of an ongoing series, until 1986 when Marvel ended several long-running 70s books at the end of Secret Wars II. Afterwards, Luke Cage was basically put into mothballs, and when he was taken out he didn’t prove a hit on his own – his 1992 self-titled series lasted only 20 issues.

Despite numerous guest-appearances and a brief Heroes for Hire run during Marvel’s late-90s struggle, it was one man who brought Cage back to prominence despite never writing him in a solo title: Brian Michael Bendis. Bendis introduced Luke Cage as a foil and on-again/off-again flame to Jessica Jones in Alias, linking the characters from that point forward (and using them both in his Daredevil run). Then, he plucked Cage from relative obscurity to join New Avengers alongside surefire sellers Spider-Man and Wolverine.

Ever since then, Luke Cage went from occasional guest-star to one of the most prominent heroes in the Marvel Universe, though he occasionally takes a break to change a few diapers. Like Hawkeye before him, he serves as an anchor and mascot for Avengers teams and as a mentor for reformed criminals the Thunderbolts. He also has a habit of popping up in any Iron Fist title.

In the wake of his smash Netflix series released at the end of 2016, Luke’s profile at Marvel was as high as ever – with him appearing in his own title, as well as Jessica Jones and a re-branded Defenders team. END_OF_DOCUMENT_TOKEN_TO_BE_REPLACED