Return of the Jedi

The film Return of the Jedi occurs in 4 ABY, beginning with Luke’s arrival at Jaba The Hutt’s palace on Tatooine in 4 ABY and ending with the rebel’s victory at The Battle of Endor. This period of canon stories also includes the immediate aftermath of that victory through ~6 ABY, which saw the dissolution of the Empire and Republic’s rise through.

Star Wars: Episode VI – Return of the Jedi and its adaptations 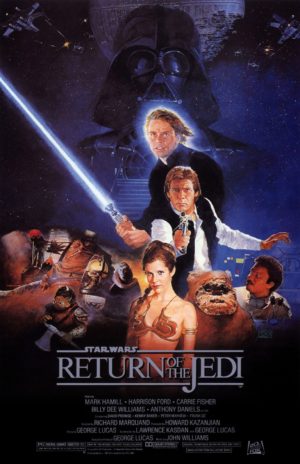 Young Readers: Star Wars: Return of the Jedi Beware the Power of the Dark Side! by Tom Angleberger

Graphic Novel: Star Wars: The Original Trilogy – A Graphic Novel (2016)
A graphic novel adaptation of the canon story of all three of the original trilogy of films in the style of Disney END_OF_DOCUMENT_TOKEN_TO_BE_REPLACED