X-Men launched as a comic book about a school of mutants, but by the early 80s it was clear that a team written by Chris Claremont and featuring the likes of Cyclops, Storm, and Wolverine had outgrown being students. 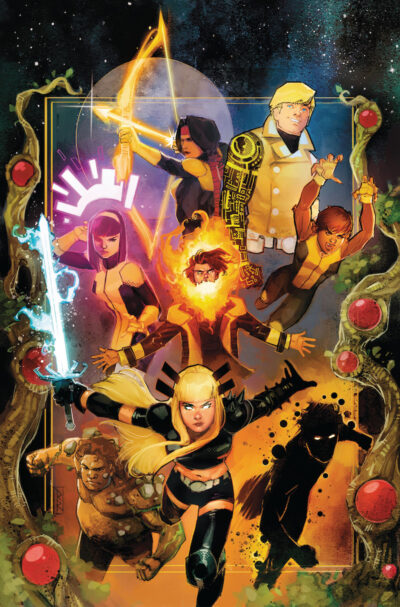 While the injection of the occasional teen like Kitty Pryde or Jubilee into the team would briefly revive the scholastic concept, there was no getting around that Xavier’s School For Gifted Youngsters was neither a school nor filled with many youngsters.

Marvel’s solution to this was to capitalizing on the X-Men’s massive popularity to have Chris Claremont launch a second X-Men series and a third wave of new mutants. The book was called, appropriately, The New Mutants. It launched in 1983 with a prestige graphic novel followed by a series that ran for 100 issues.

New Mutants was meant to bring the X-Men back to their roots – a team of teens who had just discovered their powers, as mentored by Professor Xavier. As it turns out, even though comics characters don’t need to age, comics about teens have the same problem as TV shows about high school students – eventually there’s a need for them to learn something and eventually graduate! The New Mutants transformed into the more-proactive X-Force (see Guide to X-Force), once again leaving the line without a school-based title.

Marvel rectified that in 1994, when the Phalanx Covenant crossover launched Generation X – a fourth generation of new mutants. This generation was based in Emma Frost’s Massachusetts academy as mentored by her and Banshee – long-since retired from active adventuring.

Generation X ran through 2001, when Grant Morrison’s arrival shook up the entire X-Men line. Morrison repopulated the world with mutants, spawning new characters with bizarre powers at every page turn. The concept of the school moved back into their title, the newly-christened flagship of New X-Men. However, that book was mostly focused on the core of teachers at Xavier’s school, so Marvel launched a new volume of New Mutants alongside it where the former New Mutants could find even-newer mutants to recruit to the school.

This was the fifth genesis of new mutants, which became codified as New X-Men: Academy X. Academy X was the first real “school book” that kept the high school experience centered throughout its run and between team adventures. continued through several other flagship X-Men runs and transform into Young X-Men in 2008.

By that point, the effects of House of M meant there hadn’t been any new mutants in several years of publishing, and the X-line was under the direction to keep the mutant population contained. That changed again in 2010 after the end of “Second Coming” with the arrival of Generation Hope – the first of a sixth wave of new mutants.

Generation Hope subsequently was consolidated into Wolverine & The X-Men, which combined Academy X students with members of the new sixth genesis. That continued into Marvel Now, which would add some familiar faces to the sixth genesis – the original five X-Men, plucked from their Silver Age run as teens and brought to the modern day! This familiar cast of old new mutants took the spotlight off of the sixth class, although we’d continue to see new sixth class members as late as 2017 with a revived Generation X (with the original team as mentors).

Finally, the advent of the Age of Krakoa in 2019 began the seventh class of new mutants. This generation of mutants was different than what came before, because they arrived in a mutant society that promised them everything – health, happiness, and safety. However, that brought with it challenges unique to the mutant world, including many old foes intent on corrupting these young mutants to their own aims.