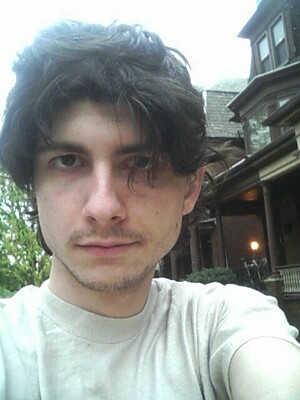 Disheveled. And, after all-night packing, no longer a resident of Pine St.

Somehow moving just isn’t moving without some kind of impossible hurdle. Having come up short on hurricanes & delinquent roommates, here’s what we’ve cobbled together:

There is no possible way for the moving truck to get onto our new street. The laws of physics seem to explicitly preclude it. Furthermore, the plausibility of any turn the truck has to make once we’re in South Philly is completely dependent on who is parked closest to the corner, and how bad they are at parking.

And, the more exciting part:

We are not done packing. I’d say i’m about 80% done with my own things, but i keep forgetting that i live with this other person, and that some things i typically think as of hers are really only thought of that way because she largely cleans them, but that i am actually responsible for packing them.

Usually going down to the packing wire isn’t a problem, but professional movers are due here in about 6.5 hours, and they aren’t going to be nearly as helpful as Erika and her “Look, it’s a [random unpacked thing], where should it go?” routine, which pretty much was singly responsible for getting me packed the last time.

6.5 hours. I think as long as we keep picking CDs we both like we’ll probably make it. Unfortunately, all of my CDs are packed.

Packing for me is never just about putting things into boxes. It is about reviewing, reflecting, and reconsolidating. Boxing my CD collection goes fast (four boxes, now), desk stuff slightly slower. Slower still is looking through a box of “peter papers” to see if anything can be disposed of yet. Nothing can be, of course, but i take the opportunity to reread almost everything inside.

At the bottom, wedged beneath a battered purple binder containing a hand-scrawled short story that only Gina has read, is a summary of a day of media-deprivation i did for my first class with Ron Bishop. My sentences are sprawling and glib (a clear precursor to this diarrheal exercise), and reading through their words to their naiveté is pure nostalgia.

I was tempted to throw this paper out, as it was just a glorified diary, but something i say in the conclusion stopped me. Feeling as though all intrusive messaging had been flushed from me at the end of my media deprivation day, i apparently sat down to write a song.

Attached to the back of my paper, for Ron’s perusal, is what had to have been the first ever printed copy of “Under My Skin.” He might have even been the first person to read the lyrics.

Amazing. So, yeah, i’m keeping that paper, and all of Ron’s wry comments therein.

Somehow, this move feels as if it’s already over. Maybe that’s too much faith to have when my solution to every problem so far has just to throw money at things, but the idea of moving into an entire house where Elise and I rule every room and closet is just too tingly and wonderful to be diluted with any anxiety about the move itself.

I keep saying that we’re moving to a house, and i keep wishing that we were buying it instead of renting it. All in good time, though.

We’re moving on Friday. I’m not sure how many times I’ve moved that I can remember.

Moving out of 64th Street was a novelty – having never moved before in my conscious life, the idea of categorizing and packing things seemed fun.

Moving from Reed Street to college was a move of efficiency – the dorm room was only oh-so-big, and the hurricane was oh-so-bad. Two carloads would certainly be all that we could manage. I reminisced at length about it previously.

Moving from Kelly Hall to Calhoun hall was my first introduction to desperate, anxious, nerve-rending, nail-biting moving. The orientation leaders hoarded carts and monopolized elevators for each other. Where were my belongings supposed to live, if i was to be out by noon and in at… four? Five? We sat in the piano lounge on our collective piles of stuff and waited.

Ahh, now we come to moves i’ve documented on blogger.

Moving out of the dorm to my first apartment (with a half-week stopover back at Reed Street) was pure misery – i was sick, my future roommate was being less than helpful, and at one point i didn’t even have a lease to prove the apartment was mine. It was also the only time I’ve technically lived with my mother since 1999. A wonderful example of our uneasy alliance can be found here.

Next comes the move of legend: me from Spring Garden Street, and Lindsay and Erika from Race Street. This recap makes it sound rather pedestrian, but it still inspires only-slightly-hyperbolic stories from the five of us whenever anyone moves.

Moving from The Grotto to here was disproportionately easy, considering it involved more possessions and stress than ever. How i managed to get all the stuff from there to here, i’ll never know. The day was honestly a sleepless blur.

Six moves in seven years, and also in twenty-three (if you don’t count when i was three).

Picking up cigarette butts as the scent of pancakes and sausages wafted over me, I found the sun to be bright.

Wait. Saturday was a day. All days are days, but Saturday was quite one, mostly because of Garbage. They were here in Philadelphia, and I was to see them (a fourth time) with Ayelet (a third).

Outfit after outfit was donned and dashed as I prepared – how to best recapture that youthful androgynous energy I wrapped myself in when I was first introduced to these songs? My past blasted in from the living room, each new track a flashback: I have very visceral connection to those songs, and sometimes hearing one transports me to some other place. Ayelet is slipping earphones over my head as “Fix Me Now” begins on the bus to New York. The sun has not yet risen, and Mr. Benjamin is there, somewhere in the front; Ayelet is telling me that this is her favorite one so far.

Back in the present, I decided on jeans (so unglam!) and made the trip down to South Street, eventually finding both Ayelet and my way into the TLA, which Garbage completely overwhelmed me. Each song was spectacularly re -magined while still taking me to places in time and space I cannot otherwise access. What was also incredible was running into Jen&Mel – direct from one of those flashbacks.

J&M were conspicuously inseparable, those cool older kids when we were in high school – the kind that knew everything about music, and would come back from concerts with pictures and scrapbooks and set lists torn right from the stage. I feel like they coached us – me, Andrea, and Gina a little bit too – on how to live in the world of music and culture. They’re older now, as much as I am, one married and the other an opera singer! (She couldn’t scream, for fear of hurting her voice, so every time she felt moved to scream she tugged on Jen’s shoulder and said “Scream, Jen, scream!”).

I devoured their phone numbers after the show, crossing my heart to call, that it wasn’t just an act of acquisition. I do love to acquire; no toy is ever as good as the next toy. I’ve found that eventually this leaves you poor, and with too many toys you don’t really want or use. It made me think that I treat friends and their phone numbers too much like toys, always looking for new ones, and not too concerned if I lose one. It shouldn’t be that way.

After the concert (at the party; I haven’t mentioned that yet) I had a great time. I hugged and kissed our newly returned Jack profusely. I learned about contemporary architecture from ‘Cesca, and the history of the Marshall islands from Kate. I danced with Laura without feeling as though I’d go into cardiac arrest. The day eventually overcame me, and I nodded off on a couch, with someone laying a blanket on me as they passed by from dancing to the kitchen.

Picking up cigarette butts in Ross’s yard, I checked the brands on the stubbed ends and imagined which of my friends had probably smoked them. Some were butts were longer – a few ill-advised drags, quickly abandoned. Others were sucked down to the filter. Every one a story.

I love my friends. All of them – even the ones who I might not even recognize anymore.

I wish they would all stop smoking, though.

What a beautiful day!

Okay, enough positivity, now for more introspection. This weekend reminded me of two things that I know and say all the time, but don’t put into practice nearly enough.

First, not coincidentally, is practice makes perfect – whether it’s practicing your singing or practicing what you preach. After a lengthy runs on some of my lesser played songs this weekend, my voice is warm and limber. The only way to keep it that way is to use it every day.

Second, the only reason to be afraid of an honest critique is if you deny its veracity (on some level, at least). This was evoked by two things specifically – a rather comedic exchange between a book-reviewer and a nasty Christian-publishing-house rep, and a reviews of an Off the Beat CD.

In the case of the former, the publisher just can’t take a negative review, and rather being constructive and trying to build a relationship with the reviewer, the rep lashes out. Repeatedly. In the case of the latter, former OTB music director Ethan Fixell took the lament that Off the Beat’s 2002 CD entailed too much “screaming” as a compliment – he and the group half-jokingly titled the next disc “More Screaming.”

How much truth existed in either review? Was the book truly that terrible? Who knows. I don’t think Off The Beat does all that much screaming – they just like to produce records that sound as authentically rock as the songs they cover. To a trained a cappella reviewer, though, that might come off an awful lot like screaming. I am sure that in each critique there was some element of truth, but for the artist it was how that truth was handled that was most important.

I can’t be afraid to record songs just because my voice is imperfect. It won’t get any better unless I sing, and hear myself singing; it’s unreasonable to expect perfection. Maybe I’m going to be flat, or scoop a lot, or use too many diphthongs – but, maybe I’ll convey exactly what the song means to say. And, once I do that, I have to be willing to hear all about those flat, scooped diphthongs, and to either own up to them or proudly say, “I meant it that way.”

Then, only then, will I get better.