After a week of her absence, every aspect of life involving Elise seems like an adventure. Let’s cook rice! Let’s light candles! Let’s go for a walk!

The dizzying newness of every trip up the stairs to see the light on in her office only serves to emphasize the advice I received from my-former / Elise’s-new co-worker Dan: a couple needs to vacation together and apart.

Since I had Bonnaroo in June and we had St. Louis together in July, Elise was suffering from a one-vacation handicap. She needed time away from me to have an adventure, and I needed time to shuffle around the house and pretend to be a bachelor. With her returned from San Francisco it feels as though our balance has been reset.

Our walk this afternoon took us through the Italian Market*, and afterwards past Pat’s and Geno’s** to wander down Passyunk to find a fabled Mexican restaurant with excellent margaritas.

It had been fabled by an old professor of mine who, apparently, has only a relative sense of location. We didn’t have directions, or the name of the restaurant, but he told us that we would have arrived when we were able to see a mural, a parking lot, and the Mexican restaurant all at the same time.

We came to such a point, and were faced with a drab Mexican restaurant with multi-colored blankets in the windows. It did not look like the home of excellent margaritas.

“Do you think that’s the place he was raving about?” 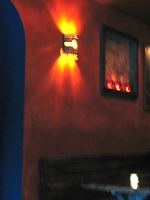 Elise tapped on my shoulder. I turned to regard her and noticed that we were standing in front of a giant orange slab of a building with no sign and a huge wooden door.**** It looked like it needed a moat.

Indeed, it was. And, not only were the margaritas excellent, so were the mojitos. Several drinks later I learned how to use Elise’s new camera, and bit my poor drunken tongue so badly that we thought I would need stitches.

It’s nice to be having adventures together, again.

* Note to self: The Italian Market is a ghost town by two on a Sunday. Start getting out of bed before one.

** Note to the internet: No Philadelphian who enjoys cheesestakes would ever eat at Pat’s or Geno’s. They are for tourists and people in South Philly who don’t know any better. If you want a good cheesesteak go to Jim’s or Tony Luke’s. Trust me.

**** Name, undetermined. It’s just above Morris on Passyunk, and both we and Prof. Steggy highly recommend it.

Previous Post: « Stops Just Short of Calling Tolkien “A Little Bitch”
Next Post: Dangerous Liasons
(or, Where Everybody Knows Your Name) »