You are here: Home / Personal / off-topics / people / elise / Engagement / Bridezilla vs. The Groomlin

As we hit the two-month mark on our wedding plans it’s becoming increasingly clear that Elise is the calm, measured one, and I am the rational, demanding one.

In layman’s terms, that would make me “Bridezilla.” Or, as we deemed me almost a year ago, “The Groomlin.”

Except, I don’t think my behavior has been all that monstrous. This is the most expensive endeavor I’ve undertaken in my personal life, but it pales in comparison to the cost of my projects at work. I’m being just as detail-oriented about the wedding as I would about a 300m-piece mailing, and there are plenty of details to orient to in both.

Part of being rational and demanding means holding the line when presented with unacceptal options. I carefully vetted caterers for ones who would take requests for vegetarian and vegan meals seriously. I had firm words with my jeweler when they nicked up Elise’s engagement ring without noticing. I refused to sign a contract with our first shuttle company because they were evasive and rude to Elise when she asked them to clarify their deposit policy.

Which brings me to the story of this weekend, my erstwhile wedding band, and the double-standard of “Bridezilla.”

Elise knows I like unusual, modern design, and early in the band-shopping process she turned me on to tension-set rings. They’re typically titanium or stainless steel bands, and the strength of the band holds a jewel without any prongs or inset.

Since I don’t wear much jewelry I liked the utilitarian idea of a stainless steel band, and I loved that I could finally have an excuse to wear a sapphire, my birth stone. I picked a sample setting, and we set out to find a store that carried something like it. 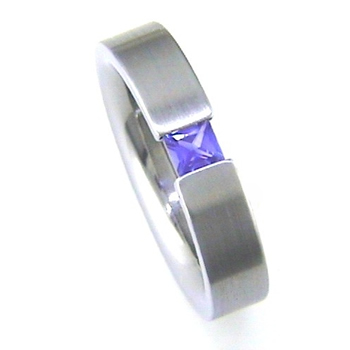 We found said store in New Hope – awesome, since that’s one of my favorite places in the area to spend the day. We visited once to nail down the exact ring and jewel – a thin stainless steel band with tension set princess cut sapphire almost the exact height of the band.

The store didn’t have it in stock, but it wasn’t a custom design – just a more obscure band/jewel combination. They told us they’d order it from the company headquarters in Europe, and that it would be in shortly. Sure enough, they rang us barely a week later to let us know that the ring was in, which is what brought us back to New Hope on Saturday.

Once we were at the counter I was so aflutter with excitement to get the band on my finger that I didn’t really look at it before I slipped it on. As I turned it round my knuckle, admiring its fit, Elise immediately exclaimed, “That’s not it!”

I looked down, and saw that though the band was right the stone was wrong – round cut, not princess.

Of course, at the point you’re paying hundreds of dollars for a ring you’ll spend the rest of your life wearing you want the stone that you asked for. The jeweler’s wife understood completely, and she told us she’d ship the ring with the correct stone directly to us.

That’s essentially how we recounted the story in Elise’s father’s kitchen later in the day, but as I told it I saw something in my mind that I hadn’t noticed earlier. As I turned the wrong ring round on my finger the company’s logo was etched on the rear of the band. But, why would it be marked visibly on the outside of my ring?

Elise, she of the eagle eyes, had no recollection of said branding. Maybe I had seen it on the inside of the band?

No. I could not shake the image of turning the ring around on my finger and noticing the mark as it turned. It was on the outside of ring.

Knowing me as well as she does, Elise thrust her phone at me. “Just call them,” she insisted. “Better than spending the next week wondering about it.”

So, sitting in Elise’s father’s kitchen with the entire assembly of her siblings around me, I dialed the jewelry store.

P – Hi, it’s Peter, with the tension set ring. I have sort of a strange question. When I was there earlier and I tried on the ring I thought I saw the company’s logo etched on the outside of the band. But, I’m sure it would have really been on the inside. Can you just look for me?

Jeweler’s Wife – Oh, sure, just let me get it out. (rummaging sounds) Here we are. Let’s see. Yes, yes, there’s the mark. It’s on the outside.

P – Well, that must be some sort of mistake.

JW – No, no, now that I think of it, all of the rings in the case have it on the outside as well, so it’s just like the one you tried on.

JW – Well, that’s how their rings come to us.

P – Can’t we get one without a brand? Or, have it on the inside?

P – Can you just hold on to our order for another day or so? I need to decide if I’m still interested in the ring.

JW – I don’t understand. You might not want to order the ring?

JW – Because of the brand mark?

P – Because it’s my wedding band. It shouldn’t have any extraneous marks on it.

P – It’s my wedding band, not a fucking Toyota.

P – So please hold our order until we call back. Thanks.

Clearly I went a little Groomlin there, but the various bystanders in the kitchen forgave me. Of course I don’t want the company’s logo to be visible on exterior of my ring. Of course I was flustered by the jeweler’s wife treating it as a non-issue. No, it wasn’t unreasonable to tell her to hold my order. Aside from dropping an F-bomb the call had been entirely rational.

So, here’s my question for you: if I was a bride, would you say that I was a Bridezilla? And, if so, what does that say about the double-standard of weddings – that a man who’s concerned about having things his way is in-control, but a woman who wants things her way is a monster?

Previous Post: « a world outside the sphere
Next Post: One Hang Drum Per Child (complements of Dante Bucci) »