You are here: Home / Tori Amos is Abnormally Attracted To Sin on May 19

Tori Amos gave a brief interview to Spinner about her impending disc, Abnormally Attracted to Sin, on the verge of her upcoming SXSW debut of new tunes next Thursday, March 19, at La Zona Rosa in Austin.

The article was accompanied by the debut of both cover art and a track-listing, both presumably presumably legit. (Incidentally, I am apparently physiologically obligated to type the title Abnormally ADDICTED to Sin at least once in each draft of a post about the disc). 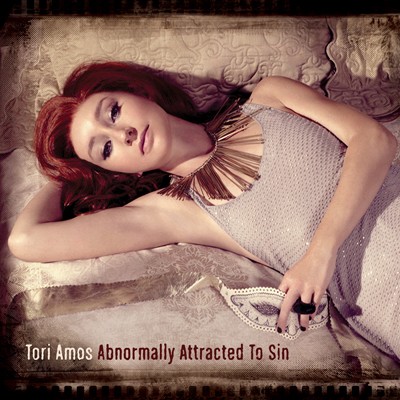 Sounds like Tori will be covering familiar ground, based on the following:

No, because I’m not torn by my religious beliefs. A lot of the problems we have right now in our world are because of intolerance dictated by the big religions.

We go back to that word — intolerance. That, to me, isn’t what America ever was. It wasn’t about telling another person how to live their life. I always said in a perfect world, you keep the Democrats out of your bank account and the Republicans out of your bedroom. But in life, why do you have to have anybody else in your bedroom if you’re a consenting adult?

And, she further recapitulated the current info on the “visualettes” accompanying the disc:

I’m calling them “vignettes” because it’s more akin to a mini-film. This all started on tour last time, when we were filming the live shows. The director was putting together montages, and as I saw the montages, new music was already coming. I started to put the new music to the mini-films that were being made out on the road.

Luckily, we were also supplied with a press release with some firmer details:

A DVD of corresponding ‘visualettes’ for each track will accompany the deluxe version of ABNORMALLY ATTRACTED TO SIN. These interlocking episodic films bring to life the narrative arc of the album. The footage was captured over the past year and shot with a noir twist in HD and Super 8.

Still no hints on the sound – could it be as glam as her rocking American Doll Posse? Or is the title – pulled from a Sarah Brown lyric in Guys and Dolls – indicative of a more minimal, classic, or even big-band sound?

Clues so far include the cover, featuring a lovely and quite-retro Tori, reclining. I’m a little dubious on the cover font – a sort of a decayed, condensed sans-serif – less about the period, more about Tori. The photo shows some regular markings on the bottom – sprockets on a negative?

Track list is even more oblique. If truth be told, I hope is fake. It’s already retreading plenty of past Tori topics with titles like “Police Me,” “Fast Horse,” and “Lady In Blue.”

Of course, who could have predicted “Teenage Hustling” and “You Can Bring Your Dog” would be two of my favorite tracks from her last disc?

There’s nothing there as zany as perennial fake-track titles like “Oranges And See It Crying,” which fans have been reading about for so long that they half-expect them to turn up as a B-side. The inclusion of “Ophelia” almost seems like a practical joke – yes, Tori, invoke more tragic woman! Better yet, perhaps “Mary Jane” is a crossover with the Bono/Edge Spider-Man musical?!