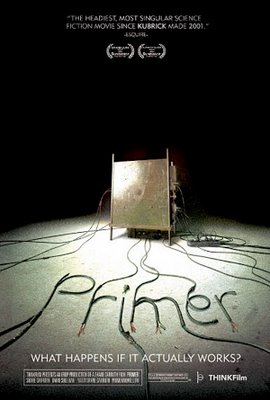 You’ve probably never heard of it. It’s an obscure, indie, sci-fi movie that’s 77 minutes long with a single special effect, shot on film for under $10,000.

I found out about it in 2005 from Rabi on the day we first set up the DVD player in our house. I bought it that night and watched it three times consecutively.

It’s that kind of movie. I’ve watched it twenty or thirty times since then, almost always two or more times consecutively. It’s one of my favorite films of all time. I want everyone I know to see it, so I can debate it endlessly with them.

(If you have Netflix you can watch it right now, online, for free.)

The problem is, it’s challenging and obscure. For almost half its running time it seems to be about a needlessly-detailed, grown-up, science fair project. The final seven minutes introduce information that alters the rest of the film. By the time you realize its true intrigue, it’s over.

The answer is not given.

In interviews, writer / actor / director / composer Shane Carruth would say only what the movie was not. He also provided a forum on the movie’s website, where a steadily-increasing number of fans could debate the finer points of the film’s chronology.

(You could also check Wikipedia, but the answer given there is wrong. Maybe. Keep reading.)

In July 2008 a user posted to the forum that he had solved the Primer puzzle after many dozens of rewatches, and that he was writing a book about it – A Primer Universe. He claimed that he was receiving thousands of requests for the book (never mind that the forum – Primer ground zero – has only 1094 registered users). He claimed that he sent it to Shane and co-star David Sullivan, who both confirmed his theory in its entirety.

Eventually, he posted the book to a blog, leading to other forum users swearing fealty to his theory.

I read the book. It only makes sense if you have the movie committed to memory. And if you do, it is mind-altering. Game-changing. It completely re-writes the movie, making significant some details that seemed routine and expository. It increases the perceived depth of Shane’s careful plotting exponentially.

If it is real.

This will be the single, most-detailed response to A Primer Universe registered on Google – and I haven’t given any details at all! All other references are mostly on social bookmarking services,a and could have easily been placed by the author. There are no reviews. There is no third party confirmation that Shane or David have read it. There is no evidence of a physical copy ever existing, though he was selling them for some time. The Primer forum users affirming it could be a series of accounts maintained by the author for this exact purpose.

The book itself is a riddle. It could be a fraud. It could even be written and maintained by Shane himself, frustrated that his fans never quite figured out his enigma.

Just like the movie, the riddle of the book is: what is the most prime? It is better to be primer, more prime than the competition.

It’s best to be primest – most prime.

And, when it comes to A Primer Universe it’s as hard to discern its primacy as it is to unravel the cinematic riddle it describes.