In my last installment I had given up pretty much all elements of boyish whimsy in favor of being REALLY SERIOUS about college, music, and dating, not always in that order.

Then came graduation. Or at least the specter of graduation on the horizon. I was zeroing in on a something-cum-laude diploma, my relationship with E was going well, and I was no longer maxing out my credit card to keep up with my new CD acquisitions.

In short, the pressure was off.

I let a little bit of whimsy back in to my life. When my mother bought a house I brought all my old comic books to my college apartment, slipping highlights to Erika and Gina under their doors. On a whim E and I bought Warcraft III, but our addiction was elastic – it never waylaid an assignment.

Then came what I refer to as my lost year. Actually, it was a year and a half. No, not the Behind the Music period with the evil girlfriend and all the vodka. (I’ve already blogged about that enough.)

I should have been so lucky. Nope, this time it was all me. Me, and City of Heroes.

Having drawn my comic collection back close to my bosom, I had gotten to wondering what was up with all of my former favorite heroes. In reading about their recent histories I also caught up with other industry news.

In my reading I kept catching rumors about a game that would totally immerse you in a comic-book world. I never retained the name. Whenever E and I would hit a mall I’d snoop around for said game, but I never saw it.

Then, smack in the middle of completing my Senior Project, I found myself reading an article about City of Heroes.

This was it – the superhero game. It was completely non-denominational – not Marvel or DC, but a continuity-free universe to plan your own hero in.

It was a long weekend at the end of April, and I decided to download the game client for a trial. It would be a way to let off steam between bouts with my Senior Project. I created some characters, including my sardonic superhero version of Rabi. 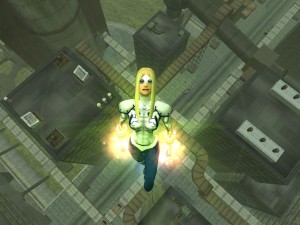 The incomparable Cassandra Lewis in action.

The next thing I remember is Autumn of 2005.

Okay, not really. Well, sort of really. I mean, I recall the rest of 2004 and most of 2005. I finished my Senior Project, graduated, moved in with Elise, and got a job. We moved into our house on Greenwich street and had a big party.

I just don’t recall anything else.

City of Heroes wasn’t a video game – it was liking living inside of a comic book. That’s what I always wanted – way back from my original comic book days when I was writing my Crisis Team novella on the bus.

I was playing it semi-professionally – like, 7.5 hours a day on the clock, double on weekends. I didn’t socialize. I didn’t write very many songs. Essentially, I worked, dated E, and played the game. THAT WAS IT.

I was known for showing up at 6pm on the dot with a martini in hand. My main character, the Rabi-derived Cassandra Lewis, was well-known to higher level folks on my server. I was a numbers guru, with lists and spreadsheets calculating damage and detailing game badges. I was a captain in my super-group. My under-bill consisted of dozens of other characters who – in my mind – all knew each other.

I even started talking about the game at work – a sure sign of deep, intractable addiction. In fact, on my lunch breaks I had begun penning a novella to tie all my characters together in a single sweeping narrative.

It all ground to a halt in the fall of 2005. The CoH staff made a big change to how they calculated data, and I realized that all of my spreadsheets and characters and stories didn’t really belong to me.

I was doing exactly the thing i swore never to do again when I started Crushing Krisis – write within someone else’s continuity, someone else’s editorial control. Quite suddenly my heroic bubble burst. I wrote a calm letter to the head game designer thanking him for 18-months of fun and went back to writing songs.

Thus came the second dark-age of my geekdom, which was spoiled this June by Mikeyil.

Tune in Thursday for the next installment in my saga. In the meantime, have you seen my Guide to Collecting X-Men Comics as Trade Paperbacks? That’s what started us down this whole geeky rabbit-hole of memory.