Last time I exposed my Behind the Music Monitor lost year-and-a-half, during which my free time was entirely composed of playing City of Heroes while drinking Grey Goose martinis. 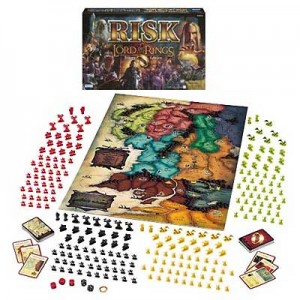 This is the official version of Risk, as far as I’m concerned. It takes a relatively undynamic game of war and turns it into free range Stratego.

I shirked City of Heroes and plunged that same amount of time into being a musician, and within one year I joined an acappella group, wrote new songs, rebooted CK on WordPress, and nudged Arcati Crisis towards becoming a real band.

That was 2006. My geekdom laid low for the next four years. Sure, I got addicted to Battlestar Galactica, but sci-fi tv and movies have always been a shared domain of E and I (one of the many factors rendering her as “best wife ever”).

Otherwise, I just played a few tournaments of Lord of the Rings Risk against myself (don’t judge, I was an only child) and idly kept pace with Joss Whedon’s scripting run on Astonishing X-Men. 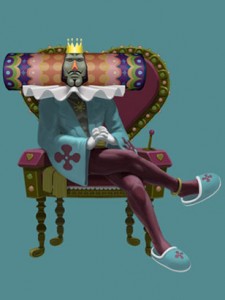 I have been convinced since day one that there is some secret drug-taking component to Katamari that would render the King of All Cosmos sensible.

I even bought a Playstation 2, ostensibly to Dance Dance Revolution my way to fitness like Elise’s brother, but instead mostly played Katamari Damacy, and later X-Men Legends and Marvel Ultimate Alliance – both a safe comics fix so long as they were closed-loop RPGs and not MMORPGS like City of Heroes

Or so I thought.

We put in an offer on our house on May 5 and that weekend we were pretty stressed – I stressed myself sick by Monday. Grumpy and home alone, I ordered Marvel Ultimate Alliance 2 to have something to new bash between haggling with our sellers. 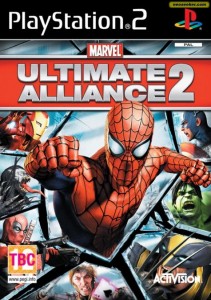 The beginning of the end of my responsible adulthood…

MUA2 tells a pretty darn accurate story of Marvel’s 2006 Civil War saga, wherein Iron Man and Captain America got into a major spat over whether all heroes should be registered with the government. Their brotherly quarrel spills out into the entire Marvel Universe, resulting in some major changes to the status quo.

Or, at least, that’s what Wikipedia told me.

A few weeks later it was May 21st, the night before Gina, Wes and I planned to jump out of a plane. I was stressed-sick again, but dragged myself out to a happy hour for a co-worker, and wound up rambling down to MikeyIl’s Movement & Motion: One Night Art Show @ Brave New Worlds.

It had been a long time since I had been in one, and everything was foreign. Why was Wolverine on the cover of X-Force? What was Blackest Night?

Since nothing made sense, nothing was tempting. I wanted to support Brave New Worlds with some business, so I decided to pick up a trade paperback – a graphic novel collecting a run of several single comic books.

At a loss for what I’d be able to jump in on cold, I grabbed the most familiar thing – Civil War, and the accompanying tie-in with Ms. Marvel, an old favorite (I was amazed she had her own title!).

This was the beginning of the end … a four-month re-emergence of focused geekdom that in some respects would make my lost year of City of Heroes look like a serious addiction to gummy bears.

I’ll tell you about it next time, but suffice to say it has a lot to do with my Guide to Collecting X-Men TPBs, which – not coincidentally – was born on May 22nd.