You are here: Home / Personal / topics / day in the life / something like life

I’ve got this elaborate editorial calendar telling me what to write and when to post, but if I just stick to the calendar that sucks a bit of the me out of the blog, eh?

Life continues to be a non-stop whirlwind of communications and music, which is exactly what I’ve always wanted it to be, so yay for the continued status quo! When not in actual rehearals I’m writing songs (for the soundtrack to Eric Smith’s novel), a novel (for NaNoWriMo), and a blog (just because, and for NaBloPoMo).

As it happens,Gina is also writing songs (at the moment, as a soundtrack to Boardwalk Empire), a novel (she’s the one who convinced me to do NaBloPoMo), and a blog (she is not the only one of us who exerts peer pressure).

I think this is pretty much what I imagined our adulthood would be like as a seventeen year-old, except for I’m married to someone way hotter than I imagined and Gina is engaged to a lawyer.

Speaking of: Elise, who has the same hectic rehearsal schedule as me but less of the writing, has starting painting the house in approved non-vomitorious colors. I think it’s very “nice” that she’s painting, which is to say I think painting (and, in general, decorating) is something people with too much money and spare time do to occupy themselves. 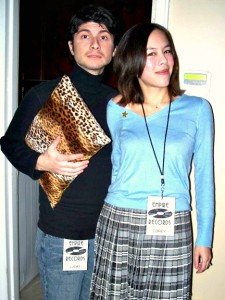 The only photographic evidence of us as Lucas and Corey from Empire Records, courtesy of our friend Tina, who was such a perfect Rachel Berry that it was a little disturbing. Note E's gold star, awarded from Rachel.

(Lest you think I am debuting this sideways insult of my wife here on the blog, she’s been hearing it for years. I’d wager she’d be happy if I just blogged about it and stopped whining about it in the house.)

As someone with neither money nor spare time, the whole process is perplexing to me. She had to use special gray primer on our dining room walls, which took an entire day to paint on and when she was done I was like, “Awesome, it’s gray, can we leave it like that?” and she had to explain that it was just the primer.

I’m all about gray. I think grays are totally exempt from every being vomit-inducing. Now the dining room is cranberry. I hear that’s supposed to aid in digestion, so I stood in it while I was eating raviolis before rehearsal last night. I ate them pretty quickly, but I think that’s just because I hadn’t eaten anything for about 22 hours. I’m not sure about the digestion angle.

The one downside to my constant flurry of words and sounds is it doesn’t leave a lot of time to interact with people I’m not writing or rehearsing with (or for taking things out of the dryer, but that’s another story). I think my next availability for a dinner with friends might be in December.

A snapshot of the last ten days of my life: Saw three concerts (one in New York), rehearsed three times, started three new songs for my soundtrack to Eric Smith’s book, tried to find a way to post three times daily here at CK (still working on that), wrote almost 7,000 words for my NaNoWriMo novel, and dressed as Lucas from Empire Records for a Halloween party.

If you did more than that in your last ten days then I want to know what else you could have possibly fit in and kind of vitamins you are taking.

Please note: methamphetamines do not count as “vitamins.”