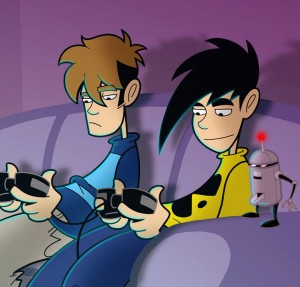 I was a big webcomics fan in the late 90s, but all of the comics I followed have gone the way of the dodo.

Well, all except for one: Penny Arcade, launched in 1998 and going stronger than ever – now they have their own merchandise, semi-annual & bi-coastal gaming convention, web TV show (which is pretty riveting), and multi-million dollar children’s charity.

The slight irony inherent in my subscription to PA is that it’s primarily known as a gaming web comic, and I am not much of a gamer. It also makes jokes about gamer-adjacent media, the terror of being an adult, fruit fucking, and the current state of the world, as well as presenting some  general inanity,

Despite not entirely getting all of the jokes, I have been a dedicated fan since the very start – since I was a teenager! That’s partially due to my adoration of  Jerry Holkins AKA Tycho’s razor-sharp incredibly-verbose wit (and his long-form writing), and partially for how Mike Krahulik AKA Gabe”s art ranges from animated James Bond sexy to completely ridiculous (frequently in the same strip).

It’s also due to those times when they hit an existential issue out of the park, like this strip from last week: 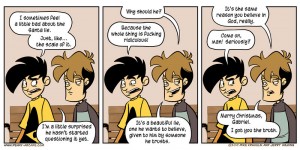 One of my first acts as a homeowner was to take what little discretionary income I had left and buy every collected edition in the PA store, both to have them on my shelf and as a monetary thank you to Tycho and Gabe for years of laughter.

I wrote a note to that effect with my order and with no prompting T&G signed my copy of The Splendid Magic of Penny Arcade: The 11 1/2 Anniversary Edition with the inscription, “Happy Housening!”