You are here: Home / Creative / my music / arcati crisis / i love it, it’s perfect, now change 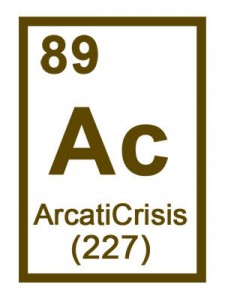 As I gave Gina and Jake my third “we only have to change this one thing” note on a song last night, I wondered if they were starting to hate me.

I’m always the one giving the most notes in rehearsal, whether it be with AC or Filmstar, so wondering if people hate me isn’t unique just to rehearsing with AC.

Why do I do it? It’s not that I have the best ears – Gina and E are much better than I am. It’s also not that I’m the one not making mistakes – I make plenty, sometimes the most! And, I love getting notes – I’d be happy to get some.

So why am I the one Simon Cowelling at the end of every song?

Mostly, because someone has to do it. That’s not to say that every song requires a critique, but they at least all require a moment of consideration before moving on or else rehearsal turns into going through the motions. If you hear things to tweak while rehearsing and don’t tweak them then you might hear the same thing against next time.

Tweaks aren’t always bad things. Jake plays a lot of high, melodic bass lines in counterpoint to my rhythm guitar work and my backing vocals. Last night I realized this was my “problem” on “Real End” – our parts totally matched, but after years of playing with Gina I wasn’t used to the new harmony they created. The fix is simply us both playing our parts with confidence so they’re distinct from each other.

However, I think the real reason for my litany of notes is that my musical super power doesn’t lie in melody or blend, but in being a fan. I make music that I love to hear. Just like you would know if someone singing your favorite song at karaoke sang the wrong melody, I notice when a song doesn’t sound like itself.

I might not be able to articulate what’s wrong (though I certainly do so better than Randy “Pitchy” Jackson), but that’s why I have bandmates to help me! I simply know when something’s up.

I’m pretty sure that Gina and Jake didn’t leave my house hating me last night, just like I know we managed to make improvements on almost every songs in our repertoire.

How many of those improvements came from my notes? Possibly none, but would we have improved without the notes?