Marvel Comics is the purveyor of a mighty list of comic book heroes, including my favorites – The X-Men.

If you aren’t the comic-collecting type you might think your consumption of said heroes are limited to every kind of media but print. Not so! Marvel releases collected editions of almost every one of their newly released issues. These handy tomes make it easy to keep up with comics without being a issue-by-issue collector.

It’s a big week for X-collections, with my favorite X-book so far this year out in paperback! Plus, an overview of Marvel’s other new books for the week.

If this list isn’t enough to satisfy you, catch up on every X-Men book collection ever in my Definitive Guide to Collection X-Men in Graphic Novels, which address the collection(s) of every X-issue ever printed. Also, if you’re new to this whole comics racket, see my recent Intro to X-Men (on a budget) post. 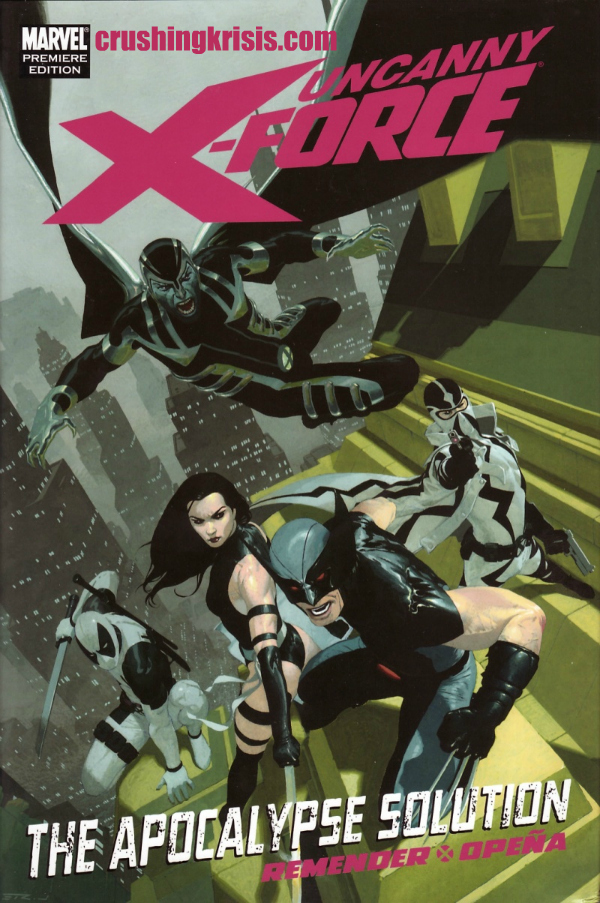 Collection of the Week:
Uncanny X-Force: The Apocalypse Solution TPB
Collects Uncanny X-Force #1-4 and material from Wolverine: The Road to Hell.

CK Says: Buy it! If you like X-Men and know who any one of Wolverine, Psylocke, Deadpool, or Fantomax are from other media, check out this book! It’s the best X-Men has been in the last two years. I read it three times consecutively when it first arrived in hardcover earlier this year.

New-to-X writer Rick Remender not only nails Wolverine and Fantomax and has a seemingly encyclopedic knowledge of X-history, but writes the best Psylocke of all time. Seriously: ever. Meanwhile, artist Jerome Opena contributes some of the most lush interiors any X-book has seen in some time, with vivid, painterly colors.

The plot? Wolverine puts together a top-secret kill-squad to deal with the return of major villain Apocalypse. The team has to go through his deadly horseman to confront him, and they’re in for a surprise when they do – one that will cause them to rethink joining the team. (Available for just a few dollars more in hardcover)

There are three more X-books out this week, but you should avoid one of them like the Legacy Virus? Which one? 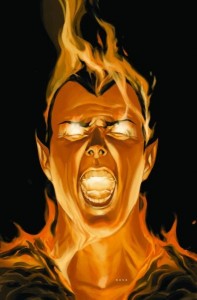 CK Says: Consider it. Poor Namor – he just can’t keep a solo title going anymore, so he’s being shipped out of the X-World to do double-duty on a Defenders ongoing later this year. That said, this run of his X-book was solid, with three issues of outstanding interior art from Ariel Olivietti. The plot of this edition somewhat mirrors the plot of Wolverine’s new solo series, but Stuart Moore’s thoughtful scripting dances circles around Aaron’s heavy-handed stories.

CK Says: Consider it. We all know Dark Phoenix died by editorial mandate in X-Men #137, and that Jean Grey was around from the mid-80s in X-Factor until 2003 in New X-Men. How to reconcile the dissonance? Read this brief three-issue TPB that chronicles the return of Jean Grey to active duty in the Marvel Universe. It’s a slight read, but it’s also cheap, and features a familiar cast of Fantastic Four and Avengers. (Also available in hardcover)

CK Says: Skip it! For the love of all that’s X I urge you not to support this crap. Marvel put out a four-issue limited series called Prelude to Schism meant to lead up to their major summer event. It was anything but that. Instead, we get four issues of the four ostensible leaders of the X-Men (Xavier, Magneto, Cyclops, and Wolverine) reminiscing about meaningless nonsense while the team prepares to face an unnamed menace (which writers have made clear is not the menace in Schism). While the Magneto issue is a good read and the Wolverine tale is illustrated by Clay Mann, otherwise this is a waste.

Other Marvel collections out this week:

Green Goblin: A Lighter Shade of Green TPB – Marvel continues filling in 90s issues in anticipation of their new Spider-Man movie. Collects the entirety of the 1995 Green Goblin series (#1-13), plus Web of Spider-Man (1985) #125, Spectacular Spider-Man (1976) #225, and Amazing Scarlet Spider #2. Note that this Green Goblin is not Norman Osborn. 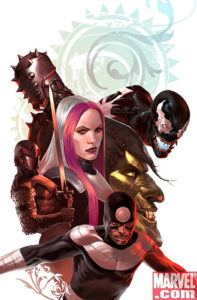 Marvelman Classic, Vol. 3 Hardcover – Collects Marvelman (1954) #45-54, the adventures of a UK hero named Marvelman. Note that the reprint pedigree of this title is a little confusing. To get it all, you need to start with Marvelman Classic #1 – which is either this or this – it’s in B&W and collects issues #25-34 (no idea what the title was prior to #25). Then, buy Marvelman Classic #2, which collects #35-44 (still in B&W).

Thunderbolts by Warren Ellis & Mike Deodato Ultimate Collection TPB – Collects the entire Ellis/Deodato run from Thunderbolts #110-121, as well as material from Civil War: The Initiative. This run was previously issued as two separate TPBs. It is preceded by Thunderbolts: Guardian Protocols.