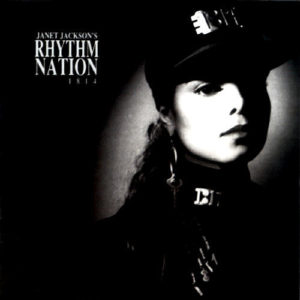 I sometimes forget the power of music as a collective experience.

Weirdly, I cannot tell you the main body of this story just yet – not until we get to 1993 or ’94, as that’s where it rightfully belongs.

What I can tell you is that music has always been one of my primary obsessions. When I was in grade school I brought my soft-covered 24-cassette case with me everywhere, which landed me in hot water at my religious school when the teachers saw song titles like “Love Shack” and “Like a Virgin.” I had the collection confiscated on school trips more than once.

In grade school no one really shared my obsession. The only music anyone was obsessing over was New Kids On the Block, and all the boys were distracted by their Transformers and Nintendo. No one wanted to talk about the music I liked, other than when Paula Abdul released the “Opposites Attract” video with the cartoon cat. As a result, I never listened to that late-80s music as a collective experience. The songs disappeared when my tape collection went extinct.

One of the tapes I played in the ground and then lost to time was Janet Jackson’s Rhythm Nation 1814, released 22 years ago next Monday. Janet had a way of being constantly eclipsed by her brother and Madonna. Songs from Rhythm Nation came out on the heels of the final singles from Bad, went head to head with songs from Like a Prayer as well as “Vogue,” and was closely followed by Dangerous.

(Watch me cover “Love Will Never Do (Without You)” on YouTube. For more info on my 30 for 30 Project, visit my intro post or view the 30for30 tag for all of the related posts.)

Yet, moreso than the other three LPs, it’s Janet’s release that is the cohesive work of genius (and that says nothing of her memorable videos). Think of the singles from Rhythm Nation, chief among them the sheer audio joy of “Love Will Never Do (Without You),” and its negative echo “Miss You Much.” The slate is rounded out by “Rhythm Nation,” “Escapade,” “Alright, “Come Back to Me,” “Black Cat,” and “State of the World.” Yes, the album charted eight of twelve songs (it also had eight interludes).

How did I forget about these songs for over a decade? Why don’t we collectively treat this album like the inarguable classic it is? 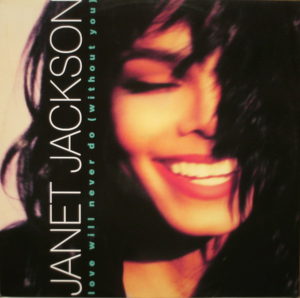 Ever since I left my grade school, one of the major defining features of my friends is the music we have in common. I have always said when it comes to choosing my friends I don’t care about race, age, gender, sexual orientation, or even political leanings – as long as they have good taste in music.

How appropriate, then, that Janet Jackson’s “Rhythm Nation” was about a country united under a common beat.

Social Media has only amplified that instant bonding over music. Videos on Facebook walls, #MusicMonday on Twitter – people wear their obsession like a badge. Now, over twenty years later, I’m meeting the kids who were obsessed with Janet Jackson in 1988. Finally, I’m hearing “Love Will Never Do (Without You)” through the ears of others, as well as my own.

I’m finally having a collective experience with the music of the late 80s.

(“Love Will Never Do” charted in 1990-91, but it was released on Rhythm Nation in 1989 and I had it memorized well before it was out on the radio. Its primary competition for my project came from singles on Forever Your Girl and Like a Prayer. Arcati Crisis’s song from 1989 would surely be from the B-52’s Cosmic Thing.)