You are here: Home / Creative / my music / gear / The Electric Cult 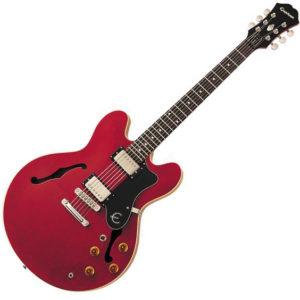 Epiphone Dot Archtop. I've played on this since 2004 (mine has gold hardware).

Boss TU-3 Chromatic Tuner. It seems silly to pay $80+ for a tuner pedal up until you have two beats to fix an out-of-tune string on stage. Also, chromatic means good for alternate tunings!

Last night as I put the finishing touches on my electric guitar’s pedal board I realized that I have become that musician, with his own persnickety alchemy for how his guitar sounds.

I really don’t understand how I became that musician or how anyone else becomes one, but I definitely am one now, and I am fully prepared to find myself insufferable.

How does it happen?

I’m not talking about playing. I get how to learn to play (and how to be insufferable about it). Western music is a system executed on a device. Notes on a guitar are the same as math on an abacus or Super Mario Bros on a Nintendo. I took six guitar lessons to learn how to play Ziggy Stardust and then struck out on my own, and I seem to be doing fine, even if I still don’t hold a pick correctly.

The thing that puzzles me is the layer on top of the music. The technology layer. Gauges of string, hardness of picks, choosing wood for a fretboard, different pickups for guitars, types of pedals to get a sound. 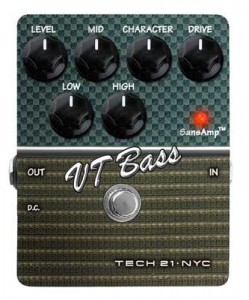 SansAmp VT Bass Driver. Though owned pedals before it, this analog amp-simulator finally got me to join the cult.

Boss GEB-7 Bass Equalizer. I already had this per the recommendation of Peter Mulvey to help keep my alternate tunings punchy and bright. Now I actually use it on a bass!

Did you know that electric guitars don’t even come with an instruction book? This is an electronic device more complicated than your typical kitchen appliance. I mean, the blender has little explanations under each button. A guitar? How am I supposed to know what the pickup selectors do, or what string gauges work best, or anything else?

My electric came with a warranty card and a little brochure advertising yet MORE electric guitars for me not to understand.

(As for tone, once I picked a few favorite songs and read up on their guitar tones. The first one was “Go Your Own Way,” and I learned that Lindsey Buckingham ran his guitar through a broken tape deck to get the right tone. Very helpful.)

I suppose the answer is community and experience – two things I’m not very good at doing. I want science. I want a fact sheet.

For many, many years my musical community was Gina. That’s it. When I won my first electric guitar in a contest I’m pretty sure I had to borrow an amp from her so I could play it.

Boss TR-2 Tremolo. I already owned this (to simulate old amp tremolo), but it became one of my favorite weapons in Arcati Crisis.

As for experience, I didn’t have any! I never had money to try untested solutions and I wasn’t out playing anywhere or with anyone (except for Gina). Hell, it took me over a year to even get good at TUNING.

The Loop-Master ABY Pedal. Gina started playing her own electric guitar, so I needed to be able to switch between us into the signal chain. This rugged, custom-built ABY pedal works in both directions!

Neither deficit really impacted my acoustic guitar playing, but breaking into the electric world was a different story entirely.

There is this cult of electricity, where you sacrifice your money and time to crafting that perfect tone only to have the electrons snatch it away from you with little notice. They’re fickle little beasts, and after a few early mishaps we didn’t want to have anything to do with them.

I think that’s why both Gina and I shied away from electric guitars for so long. We didn’t even like playing amplified for a while after a disastrous first gig in Drexel’s quad. Even after we got okay with amplification, we were still happy to keep things acoustic.

Weirdly, it took bass guitar to put a crack in the electric dam for me. When I bought a bass to fill in for Filmstar, I immediately understood something was missing from its tone. It didn’t sound like THAT bass sound, which is something a lot more discernable and tangible than guitar tone. 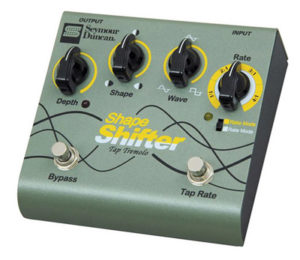 Seymour Duncan SFX-07 Shape Shifter Tap Tremolo Pedal. The more I played the TR-2 on Gina's slower songs, the more it bugged me that I couldn't match the tremolo rate exactly to the song's tempo. Not anymore ;)

Boss OD-3 OverDrive. Further research into Lindsey Buckingham yielded the fact that he now plays solely through a Boss SD-1, but I think it sound is a little thin. The OD-3 one has a thicker crunch.

I realized I didn’t have the money (or muscles) for a high-end tube amp, so I bought a SansAmp pedal to beef up my tone, but that gave me a bit too much 125hz, so I added a Bass EQ pedal, but I also wanted to add some fuzz to a few passages, so I started playing with distortion pedals.

Suddenly, I not only had a bass tone, but a burgeoning pedal board to plug my electric guitar into. It only took a few Arcati Crisis rehearsals to realized I wanted different things for my electric than I did for my bass.

A year later the result is last night, holed up in the attic working out the signal chain order of my new overdrive and tap tremolo pedals.

Learning the technology layer of music is an iterative process. It’s trial and error. You have to hear a tone on the radio or in your head before you have somewhere to go, and then you need the disposable income to get there.

I still don’t understand it. I guess some musicians have bandmates to learn from, friends to chat with, or a favorite guitarist to emulate.

Gina and I have always only had each other, but as we’ve become more confident as a band I realize we’ve also formed a community around ourselves – Jake in Arcati Crisis, our friend Chaz, Glenn from Filmstar, Josh Popejoy, Cris Valkyria and her bassist Lou Paglione, & Maria from Bedroom Problems.

MXR M182 El Grande Bass Fuzz Pedal. I've been struggling with a distorned tone for my bass. I tried the Electro-Harmonix Big Muff, but this is far superior. 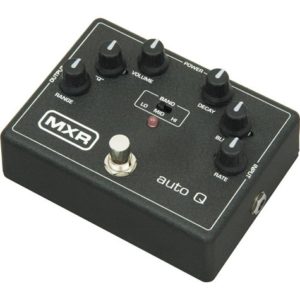 MXR M-120 Auto Q Auto Wah Pedal. This is the one effect I covet for my acoustic guitar. Joshua Popejoy uses it to great effect, and Ani DiFranco uses a similar effect.

And you know what this group of people hs in common. None of them learned this shit from science – even the ones with formal training. They groped around until they figured out what they liked.

Maybe that’s why I’ve always found that musician to be so insufferably annoying – not because she bothers me, but because I’ve never been sure how to become her.

Well, now that I’m her … err, him, in my case, but probably still “her,” since all my idols are women … anyhow, now that I’m me, I don’t want anyone else to feel that way about it.

I might be a member of the cult of electric, but I vow to always share my trade secrets, and never make it sound like a bunch of technical gobbledygook.

Are you another member of the electric cult? What are your favorite electric guitar gadgets? Which major pedal in your setup do I need to know about, stat?