I am now a member of a highly-exclusive, secret society with strict qualifications for its members.

It’s a Writers’ Club. You know, like a Book Club, only we’re reading each others’ books (and short stories, and poems, etc).

As with many of the intriguing developments in my life over the past two years, my recruitment began innocently enough with a series of tweets to Britt and Eric Smith. They had been pulling all-day writing sessions in a local coffee shop and posting photos of their back-to-back laptops accompanied by mucho caffeine. I commented a few times on how that would be an altogether fabulous idea to get me back into gear in editing my 2010 NaNoWriMo novel. 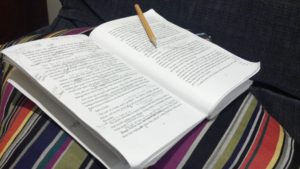 The tattered, marked-up, hard copy of my novel.

That is when the mysterious invitation appeared in my inbox. No location, no details. Just a question – would I be interested in joining the Writer’s Club?

(Luckily, the first rule of Writers’ Club is not that you do not talk about Writers’ Club. Those sorts of clubs are not ones where I particularly flourish as a member.)

I nervously accepted the invitation and then spent about two solid weeks freaking out about other people reading my novel. Not just any other people. Writers. People who take plot and characterization seriously. Some of them have degrees in English.

Luckily, I was at least slightly prepared for their onslaught of literate opinions, but that preparation hadn’t been an easy process.

I spent the early part of 2011 reading and re-reading my novel, not really knowing what to do what to do next. The book had a lot of good bits, but I knew it wasn’t a very good book yet. It was like the skeletal structure of a very handsome person. No one calls a skeleton handsome, but  good bones are a great start.

I just needed muscles and flesh to cover them up with.

I heeded the advice of many authors more experienced than I – I set the book aside for almost a whole year. Then, a year after I penned its first words, I printed the entire thing out on paper and began a serious edit pass.

Why paper? Because, any proofreader worth their salt will tell you they make better edits with a pencil in hand. Also, it encouraged me to read non-sequentially. Taking on each chapter as an individual entity meant I attacked the weak spots much harder than if I had read them in sequence.

Flash forward to two weeks ago. I had a fist-full of tattered pages that have been with me on every commute to work, every visit to the gym – even on the plane to Vegas. Once I was past my authorial nervous breakdown, the time had come to take all those painstakingly scribbled paper edits and convert them into something cohesive and readable.

How did my first top secret meeting go? Just fine (after I first got drunk and confessed to Eric how terrified I was). It turns out, other people do find my book interesting. Even people with English degrees. They also find all the awkward bits I find awkward to be awkward. They also find some fun turns of language and plot that I didn’t even intend, but that make perfect sense.

I am much less nervous about mailing the chapters for my second engagement with the club. Now the problem isn’t fear of sharing – it’s not being sure when I’ve edited enough.

That and the randomly failing keys on my laptop, but that’s a story for another day.